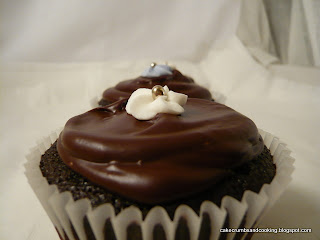 Disclaimer - the little sugar rose is sadly not vegan - I forgot to buy vegan-friendly decorations and since most of my recipients are not vegan I guessed they wouldn't mind!
Well, the clue is in the title - these are indeed vegan chocolate cupcakes to celebrate world vegan day, which is held each November 1st, to celebrate the founding of the world's first vegan society in 1944 by Donald Watson. Information shamelessly taken from the homepage of World Vegan Day. Check it out for more information! World vegan day has only been going since 1994 though! 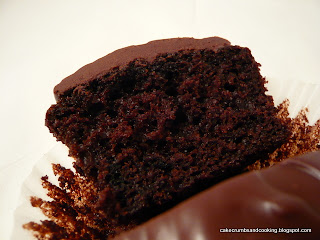 I am not vegan, I am not even vegetarian (although the frequency that meat or fish appears on my plate is vanishingly small!) but I am a complete magpie - I like to be able to pick and choose the things that appeal to me most. October has just been VeganMoFo, a celebration of the massive variety of amazing vegan food produced and eaten by a talented, imaginative and committed group of people. VeganMoFo, the Vegan Month of Food is designed to showcase whatever the person blogging wants to talk about, as long as it's vegan. One of my favourite vegetarian blogs, Johanna at Green Gourmet Giraffe has been participating in MoFo this year, and she has produced some amazing things, as have so many other blogs I regularly read. The massive commitment here comes because the bloggers commit to posting either every week day, or every single day of the month. There really are so many inspiring blogs out there! 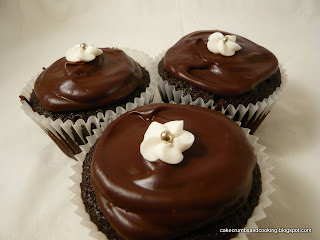 But anyway, back to the task in hand, vegan cupcakes. I bought Vegan Cupcakes Take Over the World (VCTOTW) quite a while ago mostly because I was annoyed that so many people were raving about recipes that I couldn't access (mostly on the Post Punk Kitchen forums) and I wanted a bite of the cherry (cake!) too...
These are the first cupcakes I've made from the book, and as luck would have it, one of the only three cupcake recipes on the PPK blog. It's a really interesting little book, with loads of different ideas that I definitely need to explore further. You can find the recipe here, with the original US cup measurements, but because I prefer to weigh I will give my measurements here. I will leave you to link for the method.I also used the melty chocolate ganache on pg 143 of the book rather than the choc mousse topping given in the link (though that does look particularly delicious!). I made a couple of minor amendments to suit what was available in my storecupboard.
Vegan Chocolate Cupcakes
Ingredients
225ml soya milk
7ml white wine vinegar
150g white caster sugar
70ml(g) light olive oil
1tsp vanilla extract
1/2tsp chocolate extract
125g plain flour
30g cocoa powder
3/4tsp bicarbonate of soda
1/2tsp baking powder
1/4tsp salt


Oh yum! These are fabulous. They are so soft, light and moist and with such a deep, rich red chocolatey colour and aroma that you couldn't fail to be pleased by them. The topping was amazing too - it was just sweet enough, and stayed soft and slightly gooey sticky, and really complemented the cupcakes very well indeed. A tiny, minor point is that personally I found the cake a touch sweet, but other colleagues commented that it wasn't too sweet - opinions obviously vary! 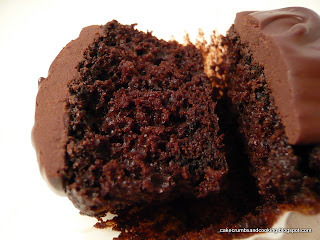 Once again, as with my avocado chocolate cupcakes, I was really impressed by the dark red colour of these cupcakes and work colleagues seemed to like them too. I had a recipe request from someone who prefers to avoid eggs and my lovely vegan colleague was really pleased that I had made cupcakes that she could have, and I was thrilled that she enjoyed them.
I think these could definitely become one of my go-to recipes - the method is easy because you don't have to soften butter or do any creaming step, and there is no worry that the eggs will curdle the mixture. All of the ingredients are storecupboard, even the milk, as it is easy to buy long-life cartons of soya milk, so there is never any excuse to not be able to whip up a batch.
As I said earlier, I'm not vegan, but these are seriously amazing cupcakes, and more fool you if you skip making them because you aren't willing to accept alternative ingredients!!! 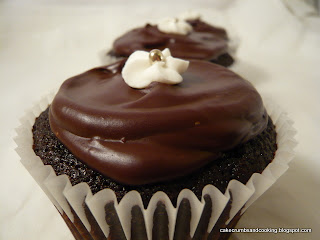 I love vegan food too, and your choc cake looks really moist!:D

They look really good! The sheen on your ganache is amazing.

Looking at the list of ingredents it seems unlikely a cupcake will be produced, but how wrong to assume this, especially when you see a lovely sticky chocolate cupcake in your photographs. They look so pretty too.

Don't they look moist and lovely! Good to have a vegan option up my sleeve, thanks C! :)

These look great - if you hadn't said I would never have guessed they were vegan. The frosting/ganache in particular looks thick and divine!

I have to admit I've never ever tried vegan food but these cuppies look pretty heavenly and may just be all the incentive I need ;0)

They look delicious and moist - and nicely low fat too!!

Thanks for the lovely shout out - I am impressed you remember world vegan day - I never do but it is just bad timing for me! And today was a vegan fest in melbourne but again I just didn't make it - too many family birthdays - love the sound of your cupcakes - I have vegan with a vengeance and vegan mofo has made me feel I must try some of the sweet recipes from there - so far I have only tried the savoury ones. Baking without eggs is interesting and great when you find you don't have them about the house.

Wow, these look good. Your ganache topping looks really lush and tempting. I've been quite impressed with the vegan cakes I've made so far, but glad to have another one to try. having said that my vegan work colleague has now decided, after many years, that veganism isn't for him so I don't have quite the same imperative to try.

Christy - thanks for leaving a comment. They were really, really moist - fab!

Foodycat - thank you. I was so pleased with the ganache - it was just so easy to make.

Maggie - thank you. I know what you mean, it seems unlikely to make a cupcake, let alone a good one, but these are definitely proof that sometimes you just need to trust your recipe.

Celia - these are a great vegan option, and if you keep some long-life soya milk in the house, they're very storecupboard friendly. I guess you're never likely to have a no-egg sitution though with your ladies!

CC - the ganache was really lovely, and helped to make them really special.

Chele - you should definitely give them a go, you've nothing to lose!

BVG - yes, they are pretty low fat, and the fat in the cakes isn't saturated (the topping is another matter....)

Johanna - you've got more important things to think about on the 01/11 though. Baking without eggs is very interesting, so many different properties to replicate. I think that these cupcakes would probably be far too sweet for your taste, though Sylvia might like them!

Choclette - I'm only just starting to dabble in vegan baking. It's interesting though. My vegan work colleague has only just started with us, but is a locum, so won't be there forever. I do like to make recipes that stand on their merit though, rather than people saying, it was good for a vegan cake, rather than just it was good!