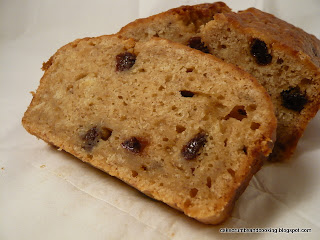 I spotted this recipe in the current issue of the Waitrose Kitchen magazine and was pleased to have a home for the two bananas that were threatening to overwhelm me with banana-smell every time I entered the kitchen. I don't really know why I bought them in the first place - I went through a phase (a very long one, a couple of years probably) of having a banana every single day for breakfast (yes, I'm very much a creature of habit). But I've recently moved on from bananas to apples. Don't know how long this phase will last... anyway, it meant that my bananas had moved from ripe to the almost-beyond-edible stage that is perfect for baking.
The original recipe is here, but I adapted it because I obviously didn't want to put walnuts in there (hello raisins) and I didn't have soured cream. In all honesty I cannot remember what I substituted in the place of the soured cream. I have a feeling that it was most likely to be yogurt, but perhaps milk. Rubbish memory! 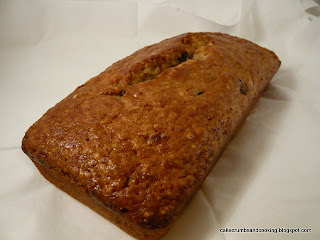 Successful though, and I'd make this again. Waitrose called it 'Simplest ever... banana bread'. I'm not sure I quite agree with that - in the absence of a food processor I rubbed the butter into the flour but it certainly wasn't difficult in any way. I opted out of the specified cream cheese topping on the basis of keeping qualities, and also I happen to love the way that banana bread becomes moist and sticky on the top after a couple of days. Mmmm, sticky! 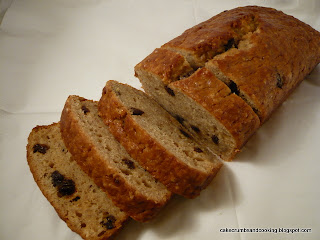 Method
- Preheat the oven to gas 4/180C. Grease a non-stick 2lb/900g loaf tin with butter and line with baking parchment.
- Place the flour and baking powder in a bowl and rub in the butter until the mixture resembles breadcrumbs. Add the sugar.
- Combine the yogurt/soured cream, egg and vanilla extract in a small bowl/jug and add the bananas, mashing them until all well mixed.
- Add the wet ingredients to the dry and mix well until combined. Add the raisins and mix in.
- Pour/dollop into the prepared tin, level the surface and bake for 40-45 minutes until risen, golden and a skewer inserted into the middle comes out clean.
- Allow to cool on a wire rack.


It's a fairly shallow loaf, which is just a reflection of it being a fairly small amount of ingredients, I wasn't expecting a massive rise. I guess you could make it in a smaller tin if the shallow-ness bothers you. It was nice and moist and the raisins had plumped up well during cooking. I had forgotten how nice banana bread is, and especially with raisins in it, providing a textural contrast and a hit of fruity sweetness.
Tasty - yes. Make again - yep, probably. Well received with colleagues - happily yes! A success all round really then. 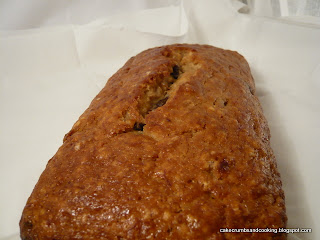 Yum yum, banana bread with raisins is the best.

Yum! Toasted banana bread slathered with butter is one of my favourite breakfast treats.

i just made this exact loaf but put white chocolate in instead of raisins... damn fine loaf!

looks good. I have a banana loaf recipe which has raisins in it, they add a lovely sweetness.

Loving the addition of the raisins. What is it about a bake with raisin's that make me start to drool!!

I haven't had banana bread for ages, you are tempting me here.

The banana bread looks wonderfully moist. Ohhh sticky topping, I love it when cakes do that. Yummy :)

Banana bread always looks so good, as does yours, and is usually easy to make, but neither of my children will eat it.

oh yum - the slice you've cut shows how juicy and moist the texture is. Great use for bananas (I've gone off eating them of late - not sure why, I still love them in baked goods)

Now that is a success all round! I love banana bread.

I agree - any recipe that includes rubbing in butter can't claim to be the easiest ever - haven't they every made a cake where you fling all the ingredients into a bowl and stir! Not that this means I wouldn't love some of this cake

Dom - it is indeed. I like your addition of white choc - very nice!

Janice - the raisins are great, they add sweetness as you say, but a different texture too.

Chele - I don't know, but make this because it's easy and it'll satisfy your craving!

Jac - it's worth being tempted!

Katie - I love the sticky topping too - mmmm, sticky...

Suelle - what a shame neither of your children like it. I love it - I guess it isn't worth making a small loaf for yourself and freeze part of it?

CC - it was really moist! Snap - I still like bananas, but just not on their own at the moment.

Brydie - I bet your monkeys would love this!

Johanna - indeed - it was the rubbing in that got me - this is definitely not the easiest technique to make a cake! I'd love to share it with you!