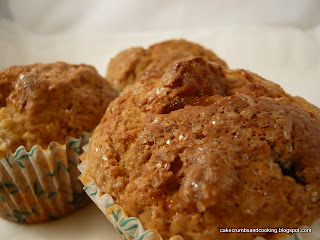 These came about because I had a surfeit of various ingredients that I wanted to get rid of make into something delicious. First on the agenda - half a carton of buttermilk. Next up, a half used tub of half fat creme fraiche. Thirdly, some rather ripe pears that I am singularly failing to eat in raw-fruit-good-for-you form. Finally, crystallised stem ginger. I suppose the last one didn't really need using up as such, but with it being autumn now, spice seems right and the pear/ginger combo appealed. 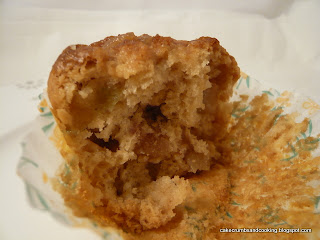 2 small ripe pears (I used conference, and they weighed 180g before peeling) peeled, cored and chopped
demerara sugar for sprinkling

Method
- Preheat the oven to 200C/Gas 6. Line a 12 hole muffin tin with papers.
- Sift together the flour, salt and bicarbonate of soda. Stir in the ground ginger and sugar.
- Mix together the wet ingredients, beating the egg into them.
- Melt the butter.
- Pour the wet ingredients into the dry and mix to almost combine.
- Add the chopped pear and ginger and continue until just mixed.

- Divide between the cases, scatter with demerara sugar and bake for 25 minutes until well risen and golden brown. 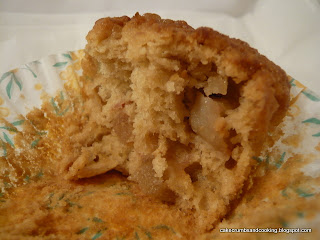 These were lovely - full of juicy chunks of ripe pear and little nubbles of crystallised stem ginger. Yum! I have to admit that they weren't quite gingery enough for me, in spite of having used 2tsp ground ginger in them. Perhaps a tbsp would have been better. They were nice and gingery when you encountered one of the (frequent) chunks of stem ginger though - yum! The pear is very subtle - I wonder if using tinned pear would up the pear flavour a little as it was more of a texture (a good one though!) in these muffins.
Tasty and warming for a cold autumn day. 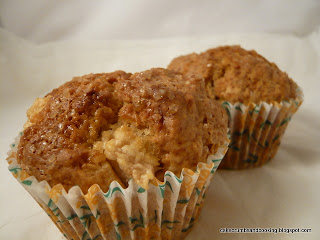 Anything with all that ginger is good by me!!!

What a wonderful way to use up your leftovers.

They look just perfect for this time of year. I have that book too, its so versatile and I love how you've adapted the recipe to make it your own.

Lovely! I love ginger too :-D

I'm a huge fan of using up left overs and finding something delicious to make with them. Looks like you've well and truly succeeded here - love the idea of the ginger and pear mix.

Unless I have some nice cheese, I really prefer pears cooked over raw. And this combination is divine.

One of my favourite flavour combinations. You can't have too much ginger in this sort of thing!

Ooh mmm liking the sound of these! Love pear and ginger combination, well done on using up the odds n sods! Sounds like how most of my bakes are born :)

I, too, am impressed with your home economics!

I too often find myself searching for ideas for half used cartons, jars and tins! Just yesterday I had 100ml of double cream to use up- chocolate ganache it soon became!

A great flavour combination C! I do love pears this time of year, could happily eat them all day!

Pear and ginger is a cracking combination - what a perfect bake for the dark autumnal days!

BVG - ginger is always good, and especially in autumn.

Chele - I do like the way the author makes it easy for you to adapt her recipes!

Foodycat - yes, pears are almost always better cooked - don't know why, but the texture of cooked pear is so delicious. I should try pears and cheese though...

Suelle - indeed you can't and these could perhaps have done with little more fire.

Anne - surprising how often I now ignore recipes in order to use things up!

Lou - thank you. It isn't always this good though. I waste far too much...

Kate - I need to get better at using up leftovers - your ganache sounds good. Pears are definitely underappreciated.