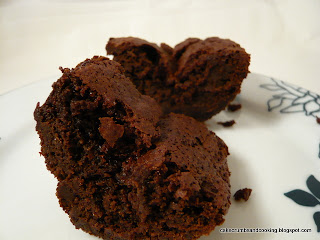 After making Dan Lepard's banana muffins last week, I had some very ripe bananas left over and wanted to find a home for them. A standard banana bread wasn't appealing to me so I decided to search for brownie recipes.
I was very happy to discover that a book I already owned (Vegan with a Vengance) contained a recipe that someone else had adapted, and that I have adapted further. Thanks to Sara at the Veggie Eco Life for posting this delicious recipe! 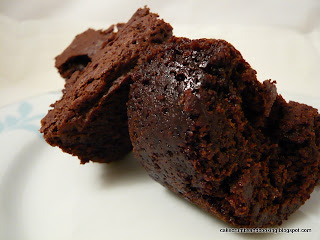 - Melt the chocolate (I actually did mine over a pan of hot water, because I had different thicknesses of chocolate and wasn't sure about using the microwave for it - the irony of using a Lindt chocolate bunny for making vegan brownies hasn't escaped me...). When melted stir in the margarine until melted. Leave aside to cool for a bit.
-  Combine the mashed banana, vanilla extract and olive oil in a large bowl. Add the sugar and beat well to combine. The mixture will be very runny.
- Sift in the dry ingredients and then continue to mix until all combined. The mixture will now be much thicker.
- Spoon into the prepared tin and bake for 40 minutes. A cocktail stick/toothpick inserted will not come out clean.
- Allow to cool a little and then turn out. 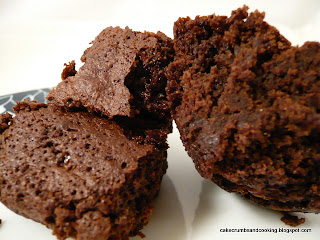 - I used my bundt tin (another idea from Sara), and lined it as best I could. I'm glad I made the effort because these stuck like anything to the tin, which was annoying! The brownie did come out in one, but wouldn't have had I not lined bits of the tin. It then broke up. D'oh!
- I reduced the sugar from the original recipe but these are still very sweet!


Deliciously chocolatey. It looked like the edges had risen up and baked more quickly than the middle, which appeared a little sunken. No matter, this made the brownie all squidgy and delicious with a fairly substantial chewy crust - just how I like my brownies. One of my colleagues said that she was surprised by how banana-ry these were, even though they were labelled 'Banana Chocolate brownies'. Something to do with not expecting the banana flavour, what with them being chocolate coloured! They were pronounced generally delicious. 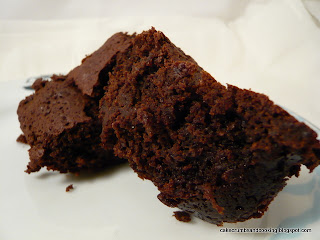 Grateful thanks to Sara at the Veggie Eco Life for bringing this recipe to my attention. The original recipe calls for a topping layer, and I would never have thought to adapt this to miss off the topping. I think this is another of the occasions where lack of pictures in a recipe book means that I would otherwise have missed a really good recipe. I would definitely make these again, and next time I might try them in a more standard shape tin.
Baker's confession: I scraped all of the stuck bits off the tin and popped them straight into my mouth when no-one was looking. Mmmm, stolen bits!
Posted by Caroline at 19:15

I was reading a brownie recipe on another blog this morning which suggested breaking the brownie cake (does that have a proper name?) into random lumps for serving, so you can consider this a fashionable brownie, not a broken one!

nothing wrong with a few stolen bits now and then!
a big fat yum and yes please to banana chocolate brownie.

They're all stolen bits when I bake!!! What a nice idea for leftover old bananas. It's nice to have something else other than a banana bread now and then. Lovely x

These looks great. I think Cooper would love them. Don't have a bundt tin, but I will remember your tip about lining well.

Wow - it looks succulent; it's shining with deliciousness in your photos!

Stolen bits are the best bits ;-)

Love the idea of banana brownies, though am avoiding bananas after buying 14 in market, don't want to see them again for a few weeks, lol!

They do look good and chocolatey!

What a great idea for bananas, I'm not generally a fan, but I'd like to try them in a brownie.

Suelle - thanks! I love the idea that my brownies are the height of sophistication rather than just broken!

Brydie - mmm, stolen bits! Wish I could send you some to share! Bet Mr Chocolate would like these...

Dom - that's exactly what attracted me to them - I was bored of standard banana bread.

Jac - I bet he would, they're very sweet though!

Anne - 14 was very optimistic - can see why you're avoiding at the moment. Bear this in mind next time you're overrun!

Johanna - yes, I much prefer pictures to aim for. I would never have made these without seeing them on someone elses blog without the topping first.

Choclette - give it a go, the choc banana combo might make them acceptable for you!