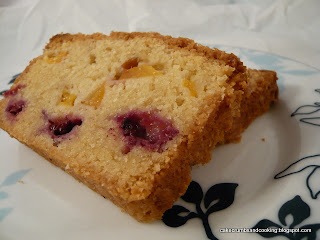 No, not a dried fruit cake at all, not even with exotic fruits (though that's an idea... dried cranberries, pineapple, papaya, apple, pears hmmm, don't use those much). Anyway, sorry, back to the fruit cake here, a cake with summer fruit in it.
Yes, it's now autumn, but the last of the summer fruit is still available and affordable at the supermarkets (plus this is an adaptable cake!) and I made this one ages ago and am determined to get it posted before all the fruit has gone! The recipe was published in BBC Good Food in the August 2011 issue, and I made it shortly after it came out, so the end of June!!! Just how behind am I on some of these cakes?!

There were a number of options given; plums (would still be fab!), blackberries (equally, see it needn't be a summer fruit cake!), peaches, or blueberries.
I decided to mix and match and had half blackberries and half nectarines. You can find the original recipe here on the BBC Good Food website, which I stuck to pretty closely aside from not making the drizzle for the cake after it came out of the oven.
The cake was successful in that I chose to put the fruit in two distinct layers, blackberries lower down and nectarine further up and the fruit stayed put, which was good. The cake was nice enough, but not anything particularly spectacular. I did discover that I don't really like blackberries in cake that much though - the seeds are too hard and crunchy and prominent. The nectarine layer was much nicer! I would either double up on the nectarine or use a mixture of nectarines and blueberries next time perhaps. My cake didn't have as pleasing an appearance as the ones pictured in the magazine, which have a very close crumb and smooth, pale tops. Ah well. Tasted fine, which is what really matters. 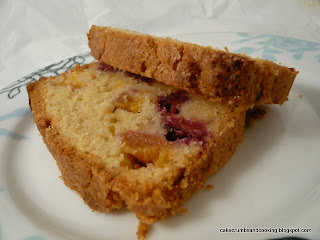 Looks good, I know what you mean about the blackberry seeds lol!

Very pretty, and a fitting finale to summer! :)

Had a cake disaster last night, wish I had seen this one first, it looks lovely and just what I could have done with - am going to nip over to your link and book mark for next time x

A slice of that would go down quite nicely at the moment...yes indeed.

I am the same way about blackberries in cakes and things. They are so pippy! But any cake that has the fruit staying where you put it is a win in my book - I really like your layers!

Love the layered effect. This is a lovely moist cake isn't it, I think you're right, dried fruit would work very well in this too!

Looks delicious! Love the look of that fruit.

This looks like a perfect Autumn bake, a lovely combination of fruit too!

It looks really pretty C. I'm impressed with your layering. I've not been keen to try whole blackberries in baking because of the seeds, but I was hoping to forage enough to do something with. Not sure if I will manage it or not this year!

I have made a very similar cake a couple of years ago that was a Blackberry cake also from the Good Food Magazine and felt like you that the Blackberries just not right too hard and sometimes to soggy making the cake rather dense as it had too much liquid in it. Like your idea of nectarines though and the cake does look rather nice xx

Celia - thank you. I wish there had been more summer though!

Jo - I hope it wasn't a complete disaster, and that you like this one if you make it!

Foodycat - thank you! I was pleased with the layers too - it's why I decided to try the cake in the first place!

Chele - it was a good recipe!

CC - indeed it is, yummy soft moist fruit, and lovely cake too!

Rachael - thanks for commenting!

Choclette - I was pleased the layers stayed. I think it would have looked better with more fruit for each layer...

Johanna - nectarines and raspberries would be perfect - next combination to try out I think!

Jo - thanks for commenting. Yes, I think I've decided that blackberries are too pippy for cakes. Nectarines seem great though!