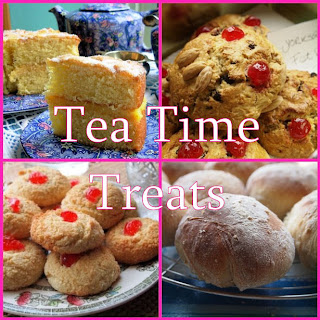 These are a different, but equally seasonal take on the clotted cream cupcakes I first blogged just over a year ago. I've made and blogged about them since, noting down how I had changed the recipe and I decided that it was time for them to have another outing, with a few more changes. 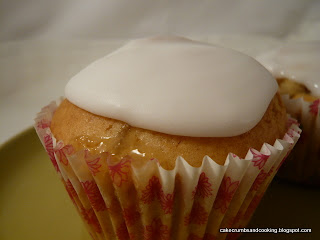 I guess that really it was a combination of ingredients looking at me that decided the final recipe, but I think it was a pretty good decision. It's also perfect as my submission this month to Kate and Karen's new challenge - Tea Time Treats. This is pretty much perfect for my blog as everything I make would be lovely at tea time, so I'm really looking forward to participating! The challenge is going to be hosted alternate months by Kate of What Kate Baked, and Karen of Lavender and Lovage. This month is Karen's turn and the theme is Ginger and bonfire treats. I think that with the combo of seasonal pears and warming ginger, these cupcakes are a great submission! You can find more info on the challenge here. 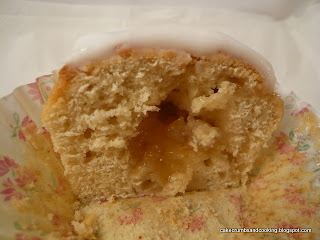 I had pears and creme fraiche and where the original recipe uses jam, I had a jar of ginger conserve and because pears and ginger are such a good match, better than any of the jam I had open and to hand (although actually, I think I have some rhubarb jam somewhere that would be a good combination.... hold that thought!) I decided to go with pear and ginger. 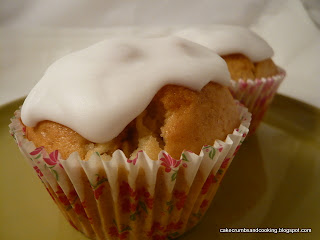 - Preheat the oven to 190C/Gas 5. Line a 12 hole muffin tin with papers.
- Beat together the butter and creme fraiche, mine was still rather lumpy, and remained so throughout.
- Add the sugar and beat well, then add the eggs one at a time, beating well in between adding the eggs.
- Add the flour, baking powder, ground ginger and a good slosh of water (you could use milk, but I didn't have any open) and beat well to combine.
- Add the pears and mix in. I actually waited until this stage before peeling and chopping them, to prevent them browning too much.
- Divide half of the mixture between the cases, then top each with a blob of the ginger conserve. Finish by dividing the remaining mixture between the cases.
- Bake for 25 minutes until risen and golden.
- Allow to cool on a wire rack.
I topped these with a simple water icing, as I wanted a little extra sweetness, but nothing to compete with the flavours of the cupcakes. 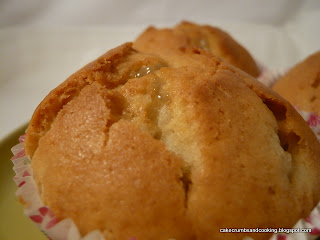 They were really nice, the ginger conserve stayed put in the centre of the cupcakes, which is exactly what I wanted. My only slight issue with them is that they weren't gingery enough! Next time I'll add some more ground ginger to the cupcakes, and perhaps use either chopped crystallised stem ginger to perk up the conserve, or just use some chopped stem ginger and mix it with a little of its syrup to put into the middles, for a real ginger hit! I must also remember that much as I like pear, it does have a tendency to disappear when baked into this kind of cake. Next time the chunks might be a little bigger, and I'll try and remember to use under-ripe rather than over-ripe pears as I think they'll keep their shape and texture in the final cake. 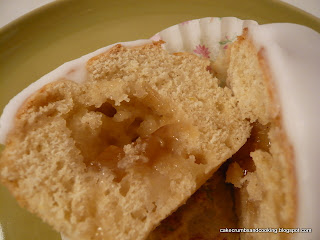 You are so right, ginger and pear go very well together. Pop them in a cupcake and it's a big yes please.

These sound really tasty - I love the combination of pear and ginger too!

Those are simply the loveliest little cakes I have seen for a while, and the combination of flavours sounds divine too. THANKS so much for entering in to the Tea Time Treats challenge, it has proved hugely successful in its first month and this is just the sort of bake that is perfect for the ginger and bonfire treats challenge!
Karen

C, they look like baby volcanoes of flavour! I adore ginger, but never thought to combine it with pears, thank you!

Pear and ginger is my idea of heaven! Yum!

I love the little ginger centre- a really lovely treat as a big bite is chomped down! Thank you very much for entering, we're thrilled to read everyone's recipes. Meanwhile I'm off to explore the other yummy versions on your blog...

oooh they look so lovely... and quite refreshing no? very light and different to anything ive seen before... lovely stuff!

I keep seeing ginger conserve and wondering what to do with it! The cakeys look lush, can imagine how good the pear and ginger and sponge combi is!

I love the sound of pear and ginger together! two of my most used ingredients this season in fact!

Pear and ginger are perfect partners. I'd forgotten about this combo until you mentioned it. Thanks for the reminder!

I agree ginger is so wonderfuly warming this time of year. These look delicious and a great sounding challange event

Sounds delicious! I love cupcakes that have fillings inside

I love pears in baking - don't like eating them as fruit but in baking...ooh, yes please!

I really like the sound of these and I think you were right about the water icing. They sound refreshing!

These look lovely and moist.

I love that the ginger takes center stage - delicious.