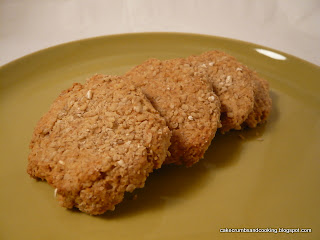 Again, I'm only just going to get my post up before the Sunday 6pm deadline!


These are the second item I've made from Dan Lepard's new book, Short and Sweet, for the challenge set up by Evidence Matters on twitter and the Short and Tweet blog. Check it out for more information. 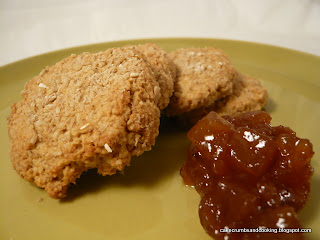 This week there was a choice of recipes, we could make either the cheese and black pepper buttons (p258) or the buttermilk oatcakes (p259). Or both of course! I chose to go with the buttermilk oatcakes, I can't find a recipe for them online, but if you fancy making the cheese and black pepper buttons, you can find the recipe here. This was a good challenge because I'd never have made these otherwise, and would have missed out on a good recipe, very quickly made yet pleasing and impressive.
The method involves grinding oats to oat flour/powder in a blender (I love this step, it's so satisfying!) and then mixing the flour with bicarbonate of soda, a little sugar and salt, a little butter and buttermilk or low fat yogurt to mix to a paste. I used low fat yogurt because that's what was in the fridge! These were really quick to pull together, and would be very impressive to serve guests with a cheese board - they need never know that you hardly had to put any effort in at all! 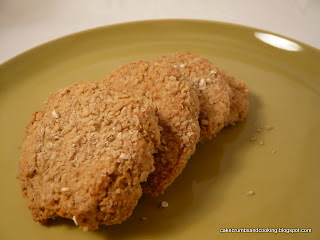 My oatcake dough was really quite soft and sticky, I'll be interested to find out how other people found it. I baked for the specified 25-30 minutes until they were starting to go slightly brown round the edges. The finished oatcakes were still quite soft in the middle, rather like a soda bread type texture rather than the crisp oatcakes you can buy from the shops. Not unpleasant at all, just not quite what I was expecting, although given the combination of yogurt and bicarb, plus the softness of the uncooked dough, I'm not sure why I was expecting them to be crisp! 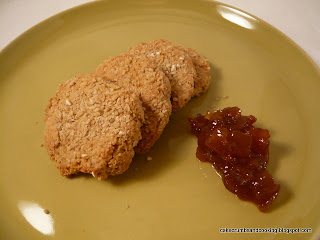 They are actually quite sweet on their own, which surprised me, because for the half batch of dough I made, I only added 10g of sugar (recommended amount 15-23g). I'm quite pleased with them, because although they will go well with cheese and chutney, they will also be tasty on their own, and I do rather love the taste of oats. I think if you're a fan of porridge you'll like these, because the flavour is the same, but don't be put off if you don't like porridge - these are obviously biscuit texture, not soft and sloppy!!! I made 19 small oatcakes from half a batch.
I hope I manage to make next week's top teacakes, but I may well run out of time!
Posted by Caroline at 17:45

I am quite intrigued by these! Up until a short while back I thought I didn't like oatcakes but then found myself with lots of cheese and no crackers apart from a packet of oatcakes that were gathering dust from a giftbox thingy..and I liked them!

Am a huge fan of oaty things, and adore the cheese chutney combination. Your biscuits do look like chunky but good beasts!

These look good - will have to give them a try sometime. We eat a LOT of cheese here so homemade oatcakes to go with them would be a delight. We have made Dan Lepard's salty oat biscuits in the past and they were very good.
I'm a fan of oat things too - lovely flavour.

These sound really interesting C. I love oats in any form so am sure I would like these too. Would like to participate in Short & Tweet more often as I'm a big fan of this book, but will just have to dip in from time to time.

These sound quite flavorful and I don't think Id have a problem with the texture. I like things that are a bit out of the ordinary. This is my first visit to your blog, so I've taken some time to browse through your earlier posts. I'm so glad I did that. I really like the food and recipes you share with your readers and I'll definitely be back. I hope you have a great day. Blessings...Mary

I'm going through an "oat-love" phase so can imagine how great these would be with some cheese and great chutney.

I enjoyed the oatcakes and think yours look delightful. It was interesting trying to second-guess the approximate texture of fine oatmeal when milling oats as I realised that I'd never seen them.

Oaty goodness, C! They look like a nice breakfast option!

they look so good.

I love oats and so does everyone in the house so I know these would be popular - esp with cheese!

Anne - thanks! I quite like oatcakes too, the hard sort do go well with cheese and chutney.

Lou - I'm always surprised that I like the flavour of oats so much! These are quite soft, different to bought oatcakes, but a nice change.

Choclette - the challenge is great for making me explore the book more. And you can just dip in as you fancy. I'm going to have to miss some soon.

Mary - I'm glad you're enjoying the blog, thanks for commenting.

CC - these would be good to satisfy oat-love!

EMatters - I just went for oat flour texture, perhaps that's why they're so soft. Thanks for the link to the round up.

Celia - you'd need quite a few for breakfast, but good to grab and go, perhaps with an apple...

Johanna - I bet Sylvia would love making them too - the dough is lovely to squash!!!