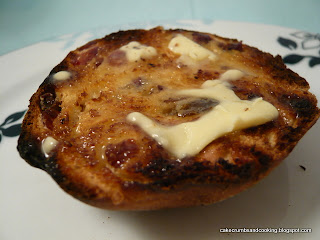 I love a good tea-cake; toasted, lavishly buttered and enjoyed with a good mug of hot chocolate on a chilly winter's morning, it's the perfect way to start the day. Well, we haven't got the chilly mornings yet (not that you'll catch me complaining about that - I hate the cold!) but that just means that I'll have to make these again when such mornings roll around.
This week's 'Short and Tweet' challenge set up by @EvidenceMatters was to make Dan's Top Teacakes, to be found on page 88 of Short and Sweet or here, from the Guardian Guide to Baking. 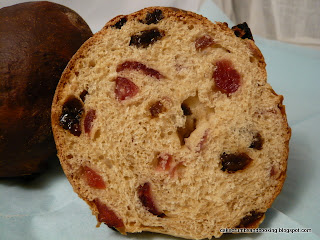 I'm really glad that these were chosen for the challenge because I probably wouldn't have got round to making them otherwise. After all, I have been meaning to make them since November 2007, so I obviously needed an additional push! I think it was the scale of the recipe that put me off them - there is only me here to eat my baking efforts (although actually, my colleagues might quite like these!) so any bread recipe requiring 600g flour in addition to lots of other add ins and three eggs is going to take me a long time to get through. I decided to make 1/3 of the recipe (recipe uses three eggs, hence not halving it!) and also decided to make the teacakes much smaller. The recipe says nine, but I got six out of my 1/3 recipe, so mine are half of the recommended size. Having said that, these are still substantial buns, the original size must be massive! 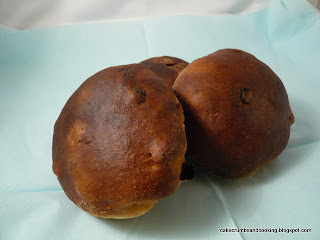 I followed the recipe pretty closely (for me) - my kneading wasn't quite spaced as Dan instructed and I probably left the dough for about 1 1/2 hours in total for the first stage, and then nearly two hours at the second stage after shaping. My kitchen wasn't very warm, so I decided that after an hour I would encourage them a little by very briefly preheating my oven, turning it off and sticking them in there. This technique worked well, and I'll do it again.
For the ingredients, I used white chocolate, not beef dripping, raisins (roughly chopped) rather than currants, as I often find currants either seedy or stalky (whichever, they sometimes have nasty crunchy bits in them) and then used 1/4 tsp each ground ginger and mixed spice for the spices. Then, out of necessity rather than choice I used chopped dried cranberries instead of mixed peel. I discovered a while ago that whilst I hate chopped mixed peel, I really quite like candied peel that you can chop yourself. Sadly I haven't seen any in the supermarkets this year, and I'm upset that they seem to have stopped stocking it. If anyone has seen any, please let me know otherwise I'll have to investigate making my own! 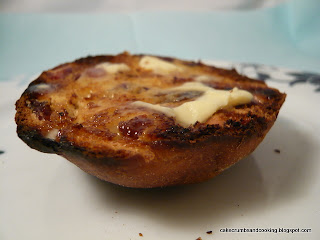 I baked at 200C rather than 220C, (Gas 6 rather than Gas 7) because I always find these sweet, fruited breads colour too quickly when I bake at such a high temperature. That is also the case here, the buns are darker than I like, perhaps next time I'll try Gas 5. To compensate I baked for 20 minutes, turning the buns upside down after 15 minutes to brown the bases. It just means that they'll only need toasting on one side! 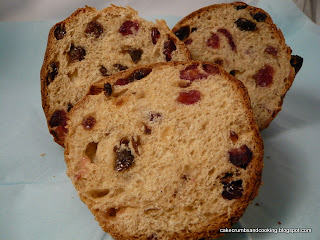 They're very tasty buns, but I do wish I hadn't darkened the crusts quite so much, I'm not a fan of dark crusts on sweet breads. The spice is very subtle, next time I might increase this a little more. The texture of these isn't the same as shop bought tea cakes, which are very light and fluffy. These are denser, but in a good way - after all, you need a good weight of bun to hold the melting butter and these are just right... There is plenty of fruit in the buns which is a good thing in my view, but again, I wish I had been able to get some mixed peel, there's just something delicious about the contrast of the slightly bitter mixed peel, the sweet bun and the rich melty butter.... mmm, melting butter! 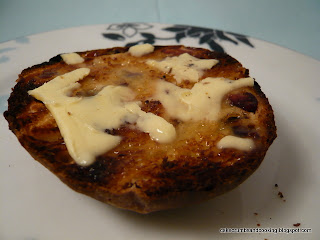 Thanks to EM for picking these, and also to Jo for saying how lovely they were, without both of these prods to make them, I probably would still have left them.
Posted by Caroline at 17:45

A toasted teacake is a thing of beauty - yours have come out soooo well; the photo of the buttered half is making me drool!

Dried cranberries are an enhancement to anything needing dried fruit, so even with candied peel, I think I'd have used a proportion of cranberries!

I noticed packs of candied peel for chopping in Waitrose last week. I bought some from Julian Graves last year but haven't needed to re-stock so don't know if they still have it.

White chocolate is such a clever sub for beef dripping! They look lovely, definitely better than any tea cake I've ever had.

I made a conscious decision not to make these this week because I have been rather busy and chaotic but now I am rather regretting it. They look wonderful. Especially the pictures with the butter - oh my!

These look gorgeous, all that butter too! I might have a go at them when I'm off this week.

Suelle - I'll have to keep my eyes open next time I'm in Waitrose then. Or try the high street when I next get there!

Foodycat - thank you! I'm glad Dan gave white chocolate as a sub, I wouldn't have fancied beef fat in my teacakes, however traditional!

Lou - I didn't find them too much effort once all the ingredients were together - the putting together part did take a while though as there are quite a few ingredients. Try them if you get chance - you could freeze some for Christmas!

Janice - they're a good distraction for a day off when you aren't hurrying to do other things.

Those tea cakes look splendid and I like the sound of your substitutions. I was startled at the size of them but it seems the people who've eaten them don't find it at all off-putting.

Love the idea of a tea cake made with white chocolate C, what an inspired idea. Your pictures and description of melted butter have me wishing I'd had a go at these. Unfortunately, I wasn't around this weekend to make them even if I'd wanted to. Now I know I can use white chocolate, there is no excuse ;-)

Any teatime could not possibly be complete without these teacakes. I really really love a warm, toasty teacake, slathered in enough butter to cause a coronary....

I've never seen candied peel that you can chop yourself C, which shop did you spot that in? It sounds a bloomin' great invention, especially for bakes this time of year

EMatters - thanks. I guessed the original size would have been far too big for me, but glad your eaters enjoyed them!

Choclette - you can't tell there is white choc in them - it's to replace the dripping, as Dan says it stays as hard as dripping at room temp and is therefore a fat sub in the recipe. I guess they'd be pretty lovely with chunks of choc too though ;-)

Kate - teacakes are fab aren't they! Definitely the butter that makes them! I haven't seen any of the peel this year, but in previous years have seen it in Tesco, Sainsburys, Booths and Waitrose. Suelle suggests Waitrose and Julian Graves, but I haven't had a chance to check those out yet.

I love these teacakes and have made them many a time. Never with cranberries and they look really pretty in there. I got a packet of candied peel in Waitrose at the weekend, haven't opened it yet, and when I get myself organised I have got some organic oranges to do myself, If I get organised that is. They do darken quite quickly, I think that's the sugar in the dough, one thing you can try is starting out quite hot and then the moment they start to colour turn the oven down and just bake a little longer. They are very nice with cinnamon butter spread on them too !