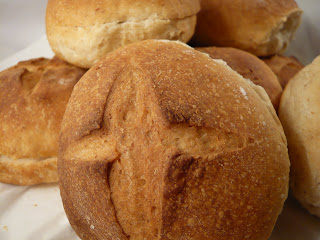 I am a creature of habit. Let me explain a little - I take sandwiches to work each day - they tend to be cheese sandwiches - easy, cheap and pretty much indestructible. However, I do sometimes want them to be a little different and so I tend to vary the bread rather than the filling. This is the latest offering, and one I'll certainly be making again. It will come as no surprise to regular readers of this blog that the following recipe is a Dan Lepard recipe, originally published in the Guardian, but also available on his forums, which, as I've mentioned before are an excellent source of advice and discussion!

As I followed the instructions exactly, I won't reproduce them here, you can find the recipe for yourself at the aforementioned forums but I will note the ingredients I used. I actually stuck pretty closely to the printed recipe, with just a couple of very minor tweaks; I reduced the salt very slightly from 2 tsp to a generous tsp and the butter slightly because I just cut a slice and it turned out to be about 35g. I don't buy sachets of yeast, but a packet but the sachets usually contain 7g, so that's what I used.

Buttermilk baps
Ingredients
1 generous tsp (about 7g) instant yeast
50g wholemeal flour
450g strong white flour
1 1/2 tsp salt
35g soft butter
200ml cultured buttermilk
oil for kneading
I made 9 from this recipe, probably left my dough more than 10 minutes between each kneading (I get easily distracted) and when shaping I left my rolls as balls rather than flatter ovals. I also forgot to flour the tops before baking. Next time I'll try and make them longer and flatter - more surface area for the all important cheese filling!!!
I really enjoyed these rolls - the buttermilk adds a really nice but subtle flavour that I find goes particularly well with a cheese filling. It's something I've noticed when making soda bread with buttermilk, and it seems to lend the bread an almost creamy flavour and texture in the mouth (avoiding that 'mouthfeel' word, which, I suppose is what I'm trying to get at) which is really delicious. The small amout of wholemeal flour adds a little colour and interest too. I can imagine that this would make a lovely slicing loaf. I actually think that I prefer this bread to the previous soft white baps. You can see the crumb in the picture below - close textured without being heavy at all and with a lovely chewy exterior. 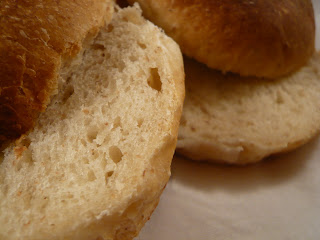 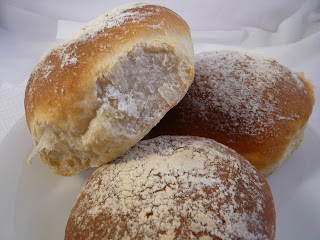 I seem to go throught phases of making my own bread, and then for one reason or another, I return to buying bread. Then something else happens and I'm back making my own again. And when I'm making my own there tend to be phases too - at the start of the year I was very much into wholemeal bread, during a phase in June and July I was making soda bread like it was going out of fashion (sorry, no post to link to as I never managed to get decent photos and write it up) and now it's white bread all the way. I know, I know, I should really make wholemeal because it's so much healthier, but at the moment, it's white that's hitting the spot.
Browsing Dan Lepard's forums, I came across the recipe he's recently published in the Guardian for Buttermilk baps. They caught my eye and I really fancied making them. But as I read down the thread I was distracted by helena's comment - talking about the soft white baps that are her family's favourite. I was intruiged and decided to put off the buttermilk baps for another time, to make these soft white baps. Would the inclusion of a little cornflour (cornstarch in the USA, I believe - fine white powdery stuff) really make such a big difference to the texture of the end product?
Further inspection of the recipe revealed that it yielded nine enormous baps, rather more than I wanted, so I halved the recipe. In the end I made 7 baps out of my half, which I felt were pretty much the right size for my lunch each day so I can't imagine what size the originals would have been!
I won't reproduce the method here, as you can find it over at Dan's forums, but will list the ingredients I used for my future reference as much as anything! I cut down the butter a little because although it's important to have a little fat in the recipe for texture, I prefer to put butter on my bread where I can taste it's delicious creamy flavour than in the bread where the butter is part of the overall effect. Well, I like to think that I'm attempting to cut down on saturated fat occasionally (just don't look at any of the other cake/cookie/biscuit recipes on this blog!!!). I also cut down the sugar as a couple of comments had been made about the recipe being a little sweet, which I didn't want, as these were for savoury use. 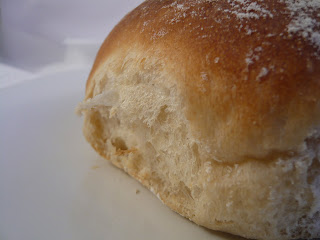 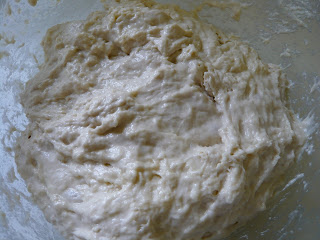 The dough was quite soft to work with at first and the kneading on oil technique that Dan recommends was a great way of stopping everything becoming plastered in sticky dough. The dough quickly started behaving itself though, and became smooth and easy to handle. 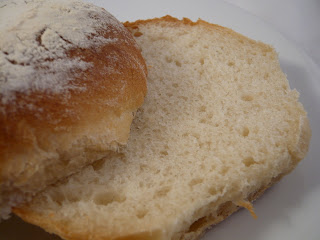 Taste and texture wise - were these really a soft bap? Some of the white rolls I've made in the past have suffered from having too thick a crust to the soft inside, with a tendency to be a little tight and dry (using just general white bread dough recipes). These were different - the crust was indeed soft and so were the insides. You can see the soft, uniform texture of the crumb in the photo above. When I proved and baked them, they fused together, giving beautifully soft edges to the rolls too. I think these are definitely on the 'to make again' list! Thanks Dan!
Posted by Caroline at 22:20 7 comments: 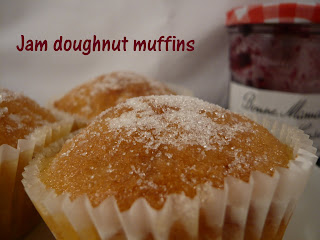 Yep, it's that time again - Sweet and Simple Bakes. I haven't managed either of the last two months bakes (allergic to nuts for the carrot cake, and simply ran out of time for the orange drizzle cake!) but you can check out everyone elses lovely looking entries in the round ups on the Sweet and Simple bakes blog.
This month's recipe looked far too good to pass by though, so in a fit of organisation I managed to make and decorate these and even post about them on time! I won't repeat the recipe here, I followed it just as it is set out here, on the sweet and simple recipes blog with only a couple of minor adjustments - I used self raising flour and reduced the baking powder to 1 tsp, I used blackcurrant jam because that's what I have open at the moment, and I probably used salted butter and omitted the pinch of salt (although I can't remember for sure!).
The only point I would make about the recipe is that the topping ingredients seem way too much for the muffins. I thought 100g butter sounded too much (nearly 10g for each muffin seems excessive!!!), so only melted 50g, which was still far to much, in my opinion. I think I would start with 20g butter and then melt some more if necessary. I'm also pretty sure that I didn't use nearly as much sugar as stated, although I didn't measure it, but just sprinkled it on until it looked about right!!! These are definitely best eaten on the day of baking/decorating - I found that by the next morning most of the sugar had dissolved into the butter, so the end product didn't quite look like the photos here, which were taken just after I'd decorated them. Like Rosie says, these are great warm - you could try warming them in the microwave too - although beware because the jam will get much hotter than the surrounding cake!
However, they went down well and I think were generally enjoyed at work. The cake was soft and moist and the jam was a good contrast. I think my tsp of jam was a bit mean though (entirely my fault, not the recipe!) so next time I'd be more generous with it. I was impressed that it attempted to stay in the middle of the muffin though - not all of the jam sank to the bottom, which drew a few questions as to how I'd managed it - magic!!! 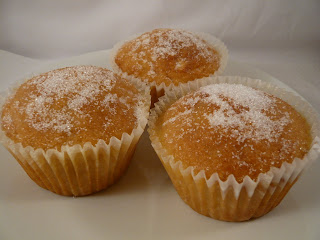