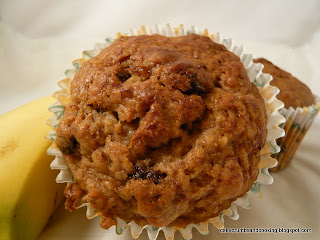 These are Dan Lepard's recipe from his fabulous series How to Bake (from which the recipes in the recent Short and Sweet are taken), published last week. I was lucky enough to be able to find some relatively ripe bananas in the supermarket so I was able to make them straight away. 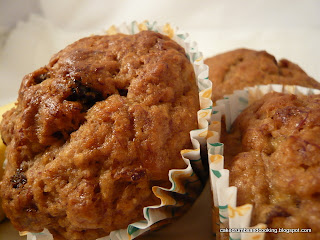 As a no-nut person, I substituted the nuts for 100g raisins. Luckily I like raisins (well, obviously, otherwise I wouldn't have put them in) because I do like to be able to substitute something to provide the textural contrast that the nuts would have done. The texture of raisins is obviously soft and chewy rather than crunchy like nuts, but I like this in my muffin, and to my mind, raisins are a great flavour combo with bananas, cinnamon and honey.
As I followed the recipe as written, aside from the aforementioned substitution of 100g of raisins for the specified 125g nuts and the use of light olive oil rather than sunflower so I will leave you to find the original recipe and method here. I used a fairly bog-standard runny honey. 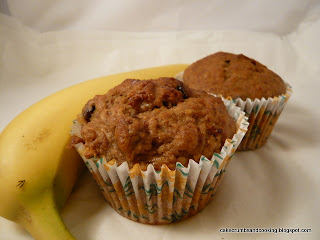 These smelled very strongly of cinnamon while they were baking, and they weren't massive movers in terms of rising. They did rise, but are a wholesome muffin, more suited to breakfast-on-the-run rather than a cake to be eaten daintily with afternoon tea. I'm sure though, that this was the intention of the recipe, and for this purpose it suceeded entirely. I didn't really taste the honey in them, but then I did use a very mild honey, and the raisins were a good substitute for the nuts, providing little bursts of sweetness and juiciness in the muffin. Yum.
A good recipe for muffins as a substitute for breakfast, but not as a light and airy treat. 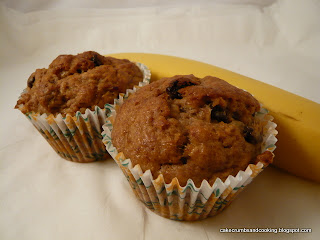 Quick off the mark again, C! The muffins look very wholesome, but I can't bake anything with banana as neither CT nor FB would eat it. It's more difficult to replace banana in any recipe that I like the look of than it is to use raisins instead of nuts!

delicious!... that Dan Lepard knows a thing or two eh?

These sound good and I think I prefer your raisin substitution - not that I've tried these either way. Like the idea of olive oil and honey too. Oh, just so many recipes to bake!

Ohh, and I think I'd be with you there in substituting the nuts for raisins C, good swop! I enjoyed Dan'd description of his view of the difference between cupcakes and muffins that accompanied the recipe in the paper last week

Suelle - not as quick off the mark as you sometimes are! Yes, it'd be pretty difficult to substitute the bananas ;-) They're a pretty unique and strong flavour.

Choclette - so many recipes, it's true. I can never decide which to make next!

Kate - glad you like the swap! Yes, it was a good explanation. Though I wouldn't necessarily agree that muffins have a healthy slant. I think I'd base my differential on whether the method was a wet into dry (muffin) or a creamed (cupcake).