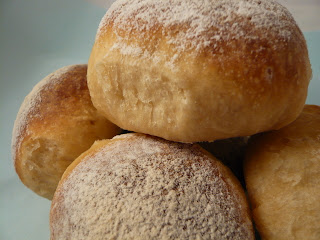 Beautiful soft buns
Also known as.... the buns that nearly didn't get made!


It's been ages and ages since I last posted a savoury bread recipe that is new to me, but I've been having a love affair with soda bread and various other tried and true breads, and haven't felt the need to experiment too much. However, when Dan's recipe for slider buns was published in the Guardian a few weeks ago I just couldn't resist making them - such a lovely picture, and the promise of soft white rolls and the added intrigue of custard powder. 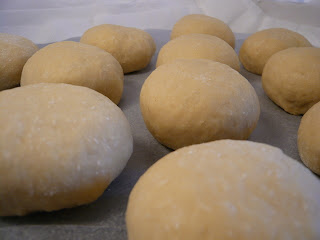 Before prooving
Yes, custard powder. You did indeed read that correctly! These buns are based on a roux method where the liquid (milk) for the recipe is mixed with a starch and thickened before then adding the remainder of the flour, yeast and salt and proceeding as normal for a bread recipe. 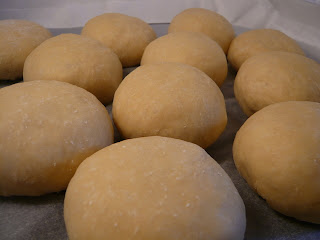 After prooving
The roux technique is not new to me - I think I first used it in the black pepper rye bread a couple of years ago, and inspired by this recipe my go-to recipe now involves boiling the water and pouring it over 1/4 of the flour in the recipe and then allowing to cool a little before proceeding. It's a technique that seems to work really well so I wasn't in the slightest bit doubtful about using it again here. I wasn't even concerned about using custard powder, after all, it's just cornflour and a bit of colour and flavouring, which would surely be drowned out by the addition of all the flour.... 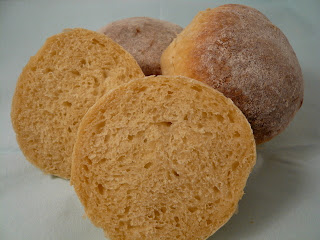 Lovely crumb
No, the real problem came when I realised that I had made custard. I love custard, big time! And realising that I had just made custard I had to try extremely hard to not just pour it into a bowl and eat it as it was, rather than continuing with the recipe. Fortunately self restraint prevailed and I added the flour. 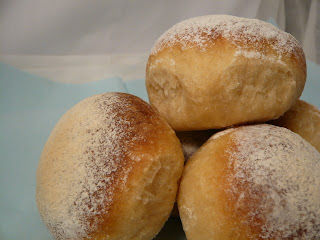 A pile of floury, delicious rolls
As I followed the recipe exactly I won't reproduce it here (it's the easiest thing ever - make custard, mix ingredients in, leave, knead very briefly, leave for ages, shape, proove, bake) but will instead direct you to the Guardian page here. My only concern whilst making them was that my yeast still seemed to stay in the little rods it comes in rather than becoming invisible, even as late as the shaping stage. It didn't seem to matter in the end though, and there wasn't a yeasty taste or appearance or aroma. Just a quirk I guess. I chose to make them 50g size, and only made a half recipe, getting 12 buns. I also baked for a little longer at a lower temperature because I'm not a fan of a dark crust on white breads. 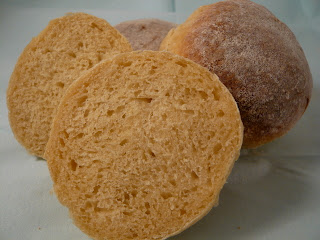 Gorgeous even, golden crumb
These were everything I had hoped they would be and more - soft and slightly sweet from the milk and a beautiful golden colour. The crumb was soft and tender, and almost tore in the way that enriched doughs do. I dusted them with flour rather than egg washing because I didn't want shiny tops to my buns, and because I had deliberately placed them close together during the prooving stage, some of them had started to join together batch-style, giving lovely soft edges too.
I didn't have any cute little burgers or falafel or anything to put in them, but I will make these again because they're delicious. Thoroughly enjoyed for breakfast and lunch. Thanks Dan, for another great recipe!
Posted by Caroline at 19:10

the man is a genius!... and you are too for creating such lovely buns x

They look so good! I never have much luck with bread rolls, I'm very jealous!

These look great! I can't wait to look through Dan's book which I've managed to borrow briefly.

You've sold them to me! What a great write up, I think yours look so inviting, and one can never have too many bun recipes up ones sleeve. I keep making Dan's semolina BBQ ones with the duvet markings, but it is time for a bun change I think :)

I will definitely try these, although as a full-sized burger bun. I haven't the patience for sliders.

Oooh and ahh! Very intrigued and interested at the addition of custard powder, how random?! The crumb looks so soft and good mmm!

Since moving out on my own, I've not baked any bread but itching to get back to it, think I need to bake these and just live on bread for a week!

I have never seen these before but will definitely be giving them a go over the coming weeks, love the idea of chocolate ones (got here from your recent post) but will start with the recipe in the Guardian before I try being inventive. Thanks!