Apple, Spice and Chocolate Tealoaf - We should Cocoa 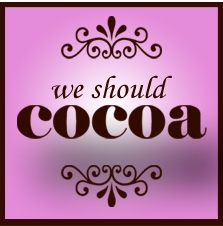 This month Chele has set the We Should Cocoa challenge, and she admits herself that it's a tough one. Keeping it seasonal, the choice this month is apples. Like I'm sure many other people have found this month, there seems to be a distinct lack of apples and chocolate pairings in recipes out there. 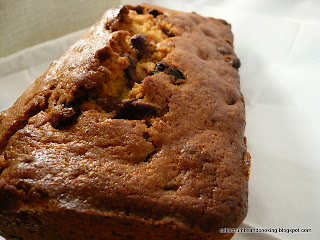 Many other fruits pair extremely succesfully with chocolate, including that other seasonal gem, the pear. But apparently not the apple. I really love apples - so many different types out there and so many subtle variations in flavour and texture, so easy to just grab and go, and forgiving of being (slightly) manhandled. But I think the thing about the pairing of apple and chocolate is the texture, well it is for me anyway. When I think of chocolate and fruit I think of the soft, luscious juicy fruit and the chocolate and quite often apples either remain slightly hard, or fall to mush, neither of which immediately appeal to me in combination with chocolate. 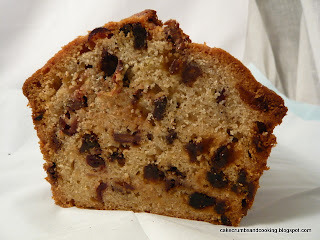 Which is my rather longwinded way of saying that this month I've chosen the fall back option, the safe recipe rather than pushing the boat out. There was something I had in mind (and I still want to make it, and still have it in mind) but I've run out of time this month, so it'll have to be postponed to a more leisurely time. This month's bake is both apple and chocolate, yet neither of them. Neither the apple nor the chocolate is the star here, but both contribute to the flavour and texture of the final cake. 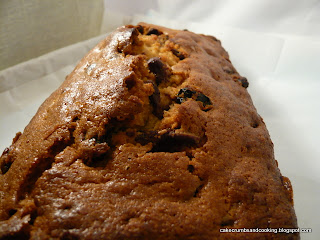 My loaf is based on a recipe to be found on the BBCGoodFood website, for Apple and Spice Tealoaf. The apple is grated into the cake to provide moisture, and I added a chopped up 100g bar of (unusually for me) milk chocolate to the cake. I decided on milk as I thought it would complement the dried fruits and general sweetness of the cake better than my usual preference of dark chocolate. I think I chose well! The other substitutions I made were to use 100g raisins and 100g dried cranberries for the specified 200g dried mixed vine fruits, and I substituted the specified ground almonds for more plain flour. I also used 1 1/2 tsp mixed spice in place of cinnamon and nutmeg. The baking of the cake is slightly odd - 45 minutes at a higher temperature followed by 45 minutes covered with foil at a lower temperature. I didn't add the sliced apple topping, but I did follow the timings given. I found this slightly odd and although I'm sure it's to stop the apple topping burning, I'm not sure it did the cake any favours. 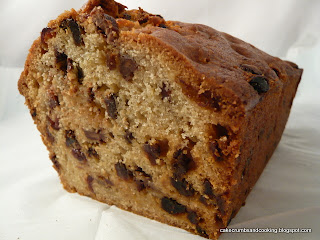 This is a very substantial cake. Once baked it felt very heavy for its size and I was concerned that it would be dense and dry. Thankfully not. The combination of the dried fruits and sweet milk chocolate was lovely, and it was a really good cake to enjoy at teabreak time at work I don't think it will become an everyday cake, it was nice, but nothing outstanding but it fulfilled the chocolate apple combo, and so I am going to submit it. For more details of We Should Cocoa see here.
Posted by Caroline at 19:20

Trouble is, you don't always know if something is going to turn out to be a star. I know I've had great hopes of some things that haven't been up to much and others I didn't have high expectations of have become firm favourites. Anyway, it looks good to me. You've become a real fan of cranberries I've noticed. I bought some to bake with months ago, but still haven't got around to using them. Still Christmas is coming ;-)

I really like the idea of milk chocolate in a fruit loaf like this, especially with the tart cranberries. Sounds beautifully autumnal with the apples and spices :)

I would never think of pairing apples, chocolate and spices together - well done you on giving it a go - RESULT! Definitely sounds like my perfect Christmas cake :)

The cake looks great. I like the combination of flavours here. I think you've chosen the right substitutions.

My mother-in-law always added chunks of chocolate to her fruit cakes, so I can imagine this working very well - especially with the cranberries.

a lovely tea loaf like this, cold out of the fridge, slathered in butter is perfect sunday tea heaven for me... i'm a bit odd though x

It looks a lovely cake and packed full of yummy ingredients. I love cakes like this that are suitable for everyday munching. I agree the chocolate apple combo is quite rare. Its starnge as we pair so many other fruits with chocolate