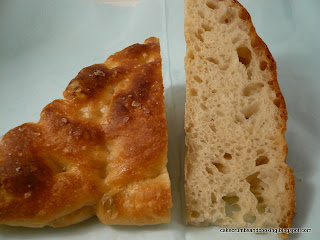 Short and Tweet is a new baking challenge being set up by Evidence Matters. There is a new blog dedicated to short and tweet here, check it out. I'm going to be fairly brief here, largely because I need to post this soon if I'm going to make the 6pm deadline for entering the challenge!
The idea is that a group of people make the same (nominated) recipe out of Dan Lepard's recently released book Short and Sweet so that we can all compare notes on how it has gone. There isn't an obligation to opt in or to join a group, and this suits me perfectly because although I want to make lots of the recipes in the book, there will be some I have already made and don't want to remake, weeks where time just runs away with me, and other weeks where the ingredients of the recipe just don't appeal or I can't substitute the nuts for something else because the recipe depends on them. 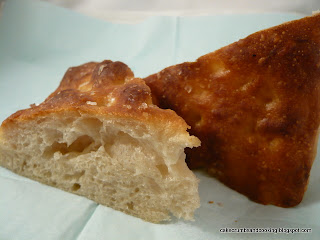 Thankfully, this week was something I really, really wanted to make, and have done for ages. I think this was first published by Dan in the little booklet that was given away with the Guardian one Saturday four years ago. I still have my paper copy of this booklet, well thumbed and in danger of falling apart so it's a good job that it's still available online, here! The recipe we are using this week is here. The only difference is that the recipe in the book has 50ml less water. 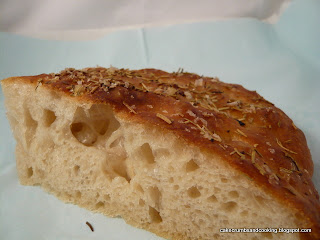 I was worried about making this dough for a number of reasons - last week I made bread that turned out like a house brick and was worried that my yeast was having a sulk and wouldn't work. I wasn't too concerned about the softness of the dough - plenty of olive oil is always helpful, and in this case adds to the flavour of the bread. 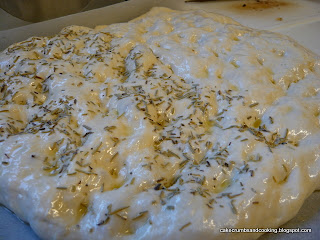 After I tipped my bread onto the baking tray and pushing it out as far as I could, I left it about 15 minutes to relax and then stretched it further. I don't think I went nearly far enough though, because mine is less of a 'flat'bread - the clue should be in the title, and mine is pretty puffy really! I added dried rosemary to half of my loaf because I cannot countenance making a foccacia style loaf without at least some of it being rosemary flavoured - I just love it, and the way that the olive oil and rosemary complement each other. 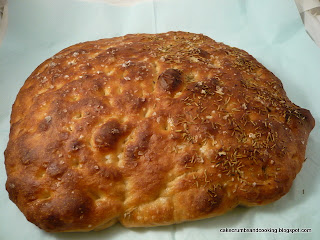 Baking notes:
- I used a splash more water to get my dough to come together and was concerned that it would be too dry to do the folds specified in the recipe, but all was well, and the folding worked well.
- Next time I would bake at gas 7 for only 10 minutes and complete the rest of the baking at the lower temperature - my loaf browned very quickly indeed, and I had to cover it with foil to stop it burning during the remaining time, which isn't ideal really.
- As I cut into my loaf I thought of the foccacia challenge on the Great British Bake Off this year, and how Paul Hollywood cut into the contestants loaves and pronounced them too dry or that they had added too much flour, or that the crumb structure was too tight and close without the characteristic air holes. I'm pretty proud of my loaf - all of the folding must have really helped to create a lovely light open structure with lots of the desired air bubbles! 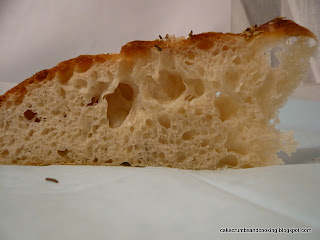 I'm sure there will be lots and lots of loaves out there, but I've seen Joanna's leek rarebit version over at Zeb Bakes, and it looks gorgeous. I can't wait to see all the different loaves and how everyone found working with this dough. The little piece I've tried already was delicious - chewy and moist, I think my bread will be perfect for lunches with lots of roasted med veg, yum, I'm looking forward to it already!
Posted by Caroline at 17:30

Well done - I look forward to including this in the round-up.

I didn't expect that we'd all have such a variety of experiences following the same recipe. It's giving quite the insight into different flours/ovens etc.

Your bread always looks so professional - you have a real talent with yeast!

gosh lots of big irregular holes in there, Paul would indeed be pleased! Looks like fun, still awaiting my prize copy of this book so I can join in.

EM - thanks, I'm looking forward to the round up too!

CC - thanks! I'm very flattered, but I'm sure it's down to the quality of the recipes I follow (i.e. Dan Lepard!!!)

Janice - the recipe has already been published on the internet - I've linked to it. I think most of the recipes in the book are already out there! I hope your book comes soon though.

That looks lovely and light - the crumb is much nicer than mine :) They are all coming out so different, the magic of bread !

I think Paul Hollywood would say good things about that crumb! Like you, I thought about that focaccia challenge as soon as I saw your lovely air holes.

This looks delicious - I consider rosemary essential in there too!!

Really glad to have found you & your lovely blog through the challenge. That's a fine piece of pannery you have made. I'm now having an enjoyable look through your blog. Thanks :)

Love your big, irregular holes. Yes, Paul, would be pleased! :-)
Oh and thanks for the online version link.

Looks like a fantastic version of a pretty darn tricky loaf. Congratulations!

Looks delicious, C, I can almost taste it! This will have to go into the "must-bake" list!

Joanna - that means a lot coming from you, but yours looks absolutely delicious to me!

Foodycat - thank you! I'd be very impressed with myself if Paul Hollywood gave this the seal of approval.

BVG - glad I'm not the only rosemary lover!

Carl - thanks for leaving a comment. Glad you're enjoying the blog, I'll hop over to yours some time soon... your foccacia looks wonderful!

Lou - thank you - yours looks lovely too.

Celia - it's a lovely loaf, and I thought it was very well behaved. Not sure how the flavour would compare to the sourdough you're used to though.