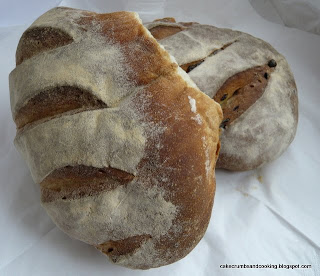 Something slightly less sweet for those days after Christmas when the last thing you want to think about is chocolate and rich desserts. Although I don't quite understand why I don't fancy rich desserts because I didn't particularly over-indulge over the festive period. I think it must be down to this nasty cold that is refusing to budge and is affecting my sense of taste too.... Anyway, this is one from the archives (there's a lot in there!) that I made shortly after Dan published the recipe. The choice of this bread was partly inspired by a tub of soured cream sitting unloved in the fridge, but also by the rave reviews of this bread on Dan's forums here. 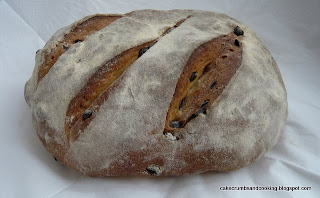 I wanted to use my whole tub of sour cream, but for reasons of space in the freezer (i.e. I couldn't make this bread, plus another and fit them both in!), the bread had to make something suitable for lunchtime sandwiches, and for breakfast, when I like a slice of bread with added dried fruit for preference. I decided to make the whole recipe but split the dough in two and knead about 90g of dried sweetened cranberries into one portion of the dough. When it came to shaping I shaped each dough separately and left them to rise on the same baking sheet. You can see from the pictures that they joined together during baking - not really a problem though! Otherwise I pretty much followed the recipe as given apart from not needing to bake for as long as specified as my dough was in two smaller quantities. 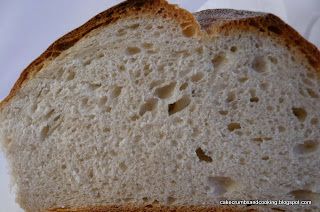 Taste/texture? You can see that the texture was fabulous - very fine grained and moist. In fact, this bread kept very well in the freezer - suffering little from freezer burn. I wonder if this was to do with the fat content. The bread I usually make has very little added fat and is sometimes prone to freezer burn if I don't get through it fairly quickly. The loaf smelled lovely while it was baking and cooling - warm and creamy but I didn't find the loaf particularly creamy to eat.

It has to be said that this is not my favourite Dan Lepard bread recipe. I don't really know why - as you can see from his forums most people were raving about this bread, but although it was nice enough I didn't think it was anything special. I'm definitely in the minority here! I think that at the time I made it I was craving wholemeal bread more than pure white and this has perhaps tainted my memories of it. The part I liked least was the crust - again for no particular reason, but perhaps I overbaked it slightly or something like that. The recipe probably deserves another chance, when I'm in a white bread 'mood'. I will admit that the half with cranberries in was enjoyed greatly for breakfast and would have been delicious toasted, if work ran to providing a toaster! 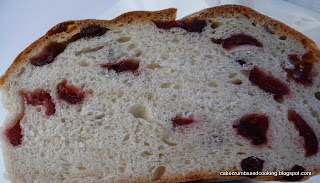 I think if I make this bread again, which is a possibility if I have sour cream left over from something else, I'll bake in a tin rather than freeform, because I think this might help keep the crust from browning as it did. The crust was definitely my least favourite part of the bread and I can't really put my finger on why. 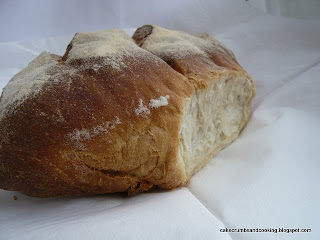 Because I baked two loaves and didn't space them apart sufficiently, I got a nice soft joining bit - yum!
Posted by Caroline at 17:30

Oh that looks so tempting! I can taste the bread from here ... yummo!

Hope you are feeling much better soon.

I love the soft joined bit in the bread too!!

Cream and milk in bread tend to promote a fast browning crust and sometimes they go a bit hard too. I have baked this in a tin, and done similar breads, using up cream and milk, they make quite nice small rolls too, you can do them like batch rolls, make the rolls and then put them next to each other in a cake tin, that way the sides stay soft and you can break them apart easily. Also if you brush the top with beaten egg or a bit of leftover cream and/ or protect the top of the loaf with some sieved flour then the top doesn't get quite so hard. Failing that cover the top with a piece of crumpled foil once it has gone brown enough for your taste. The cream, like all fat in bread improves the keeping time and makes the crumb very soft. It's not to my taste either all the time, but the one who loves a soft, sweet bread will like this. Ooh that was a bit of a long comment, but hope it's useful x Joanna

BG - thanks for the get well soon - I'm OK, just like to moan! The soft joined bit is really nice isn't it!

Jude - thanks! Happy New Year to you and yours too!

Joanna - your comments are always useful! Thanks for taking the time to visit and comment - much appreciated. It wasn't so much that the crust was hard - it was actually quite soft really, it's just that it had overbrowned (and if truth be told, reminded me of the crust I used to leave as a small child - the top browned bit of the bread that used to be much browner than bought bread now, and I used to like all the other crusts but not that one - hangs head in shame ;-)). I actually quite like the crusts now - they can be the best bit - chewy and interestingly flavoured. I think you've hit the nail on the head when you said it's not right all the time - and I think I made it more to use up the sour cream than because I wanted to eat the bread. It's a good recipe, and I may well revisit it at some point when I want a sweet white loaf. I did like the way it kept so well in the freezer.

Happy New Year to you too!

Lovely baking round up.

Will you be joining in with Fresh From The Oven in 2011? Baking a new loaf (or something yeasted every month)