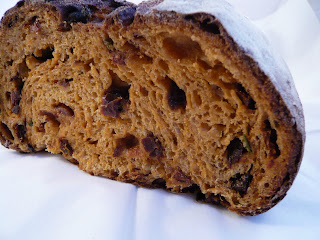 The last time I made tomato bread was years and years ago, before I started baking bread properly. I used a recipe from 'Bread Matters' by Andrew Whitley and although very good it was undeniably complicated for a bread making novice, involving as I recall, rolling a puree of cooked onions and tomatoes into the dough (though my memory could be wrong!). This recipe on the other hand would be excellent for beginners! It's Dan Lepard's latest Guardian recipe - seen early on Saturday morning, baked by Saturday lunch and blogged by Monday, pretty good turnround for me!
I made the recipe pretty much as stated (here) bar not being able to locate sundried tomatoes in oil. Stupid supermarket! So I subbed normal dried tomatoes and soaked them for 10 minutes in boiling water to compensate for their lack of moisture. I didn't bake at gas 7 though, because when I've tried that in the past everything comes out like charcoal. I baked for 10 mins at gas 7, 30 at gas 6, then turned upside down and a further 10 at gas 6. I then ignored the timer, forgot to check the loaf and left it another 10 minutes, resulting in over-browned loaf. Not really a problem, but I did find the loaf a little dry - entirely my fault for not checking sooner. I think this will always be a well coloured loaf as the sugars in the tomatoes will caramelise quite quickly. I might bake it slighly lower next time, and obviously for less time!
I even managed to use a sprig of rosemary from my garden in there (it's the only productive thing in my jungle, sorry, garden, at the moment!). Great flavour, don't know why artisan bakers don't like sundried tomato bread, I can't be a proper baker then, because I thought it was lovely, as did J! 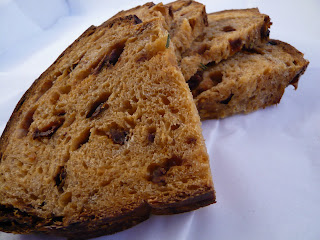 Isn't it strange how sometimes a recipe grabs you and you have to try it straight away? I often feel like that about Dan's cake recipes. Glad you enjoyed it!

Perfect for beginners? Count me in.

I love sun-dried tomatoes in bread. Absolutely delicious. Your example looks fantastic. Funnily enough sundried tomato bread is the next bread I've been planning to try in my bread machine.

Beautiful, C! I haven't tried this recipe yet, but you've inspired me to give it a go. Now to get some sun-dried tomatoes! :)

Fabulous bread! I am sure this is so tasty.

I've never made a tomato bread, but then maybe I've never tasted one I liked.. Yours looks very professional though, I like dark baked loaves and that one is superb :)

I adore sundried tomato bread. There is a place in town that Hubby and I go to for a special treat every now and again and I always opt for their sundreid tomato bread. Will be trying this recipe or sure.

Suelle - I know what you mean about recipes jumping out at you, Dan's stone fruit yogurt cake was definitely another one. I quite often make recipes quickly but rarely blog about them in a timely manner!

Brittany - it really was easy!

Antonia - I hope you enjoy your sundried tomato bread as much as I enjoyed this!

Celia - hope you enjoy it once you've found the sundried tomatoes!

Joanna - I don't think I've ever bought sundried tomato bread either but it somehow appealed to make it. I think the dark crust is partly due to caramelisation of the tomato sugars, but thanks for the compliment!

Chele - let me know if you try it!