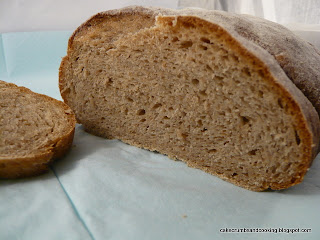 I'm still trying to get to the bottom of my everlasting bag of rye flour (don't know how 1kg can last so long though to be honest I'm not sure why I'm trying to use it up because it's not as though I dislike it and the chances are that as soon as it's finished I'll buy another bag, thus perpetuating the problem...) and decided to combine it with some of the barley flour that I used recently for the soda bread.
I used my usual wholemeal bread recipe, which is actually only half wholemeal. So this time I decided to use 75g rye flour, 75g barley flour and 150g very strong white flour. I poured 210ml boiling water over the rye flour and mixed well until no pockets of dry flour remained and there were no huge lumps. I then left it to cool for a while. Although I usually add my yeast directly to the flour, this time I liquefied it in a tbsp or so of water before adding to the dough. It didn't seem to have a detrimental effect on the loaf, and avoided all the little strands of yeast remaining visible. 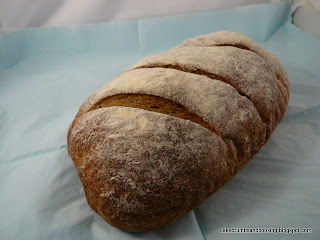 When the boiled mixture was cooler I added the barley flour, white flour, and a scant tsp each of salt and the yeast in water mixture mentioned above. Mix well to combine and leave for a while. There aren't really any times for this recipe - I just kept looking at it and thinking either... hmmm, needs a bit longer, or... oh, that'll do. I kneaded it once, briefly and then left it to do its thing. I then shaped it into a stubby loaf and left to proove. This stage was quite long, and the dough rose and expanded quite a lot. Probably too much because there wasn't any oven spring really, but it didn't seem to matter for the final texture.
It was then baked for about 40 minutes with steam (10 min at gas 7, 20 min at gas 6 and then a further 10 min at gas 6 upside down). 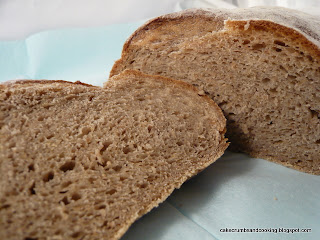 I had thought that the rye flavour would be very strong, but it wasn't really. I guess the barley and white flour damped it down, with the barley lending its own subtle flavour. It was a nice enough bread, and I'd make it again given that combination of flour in the house, but I wouldn't go out of my way to make it again. I think there are better uses for rye flour, I just haven't explored them..... yet! The crumb was denser than the usual wholemeal loaf I make using this method, but not unpleasantly dense. The crumb was also much greyer than usual - that'll be the rye flour then! 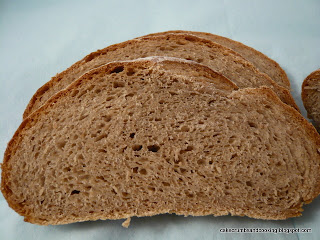 I LOVE rye bread... yours looks so perfect, well done... I need to get baking ASAP... this is very inspiring!

It looks a lovely colour and texture to me. As you know I make rye bread all the time and I have to say the grey colour is my only quibble with it. This mix you've come up with gives a much nicer colour.

It looks like it would go brilliantly with cheese! I haven't done enough with rye flour.

C, it looks very good indeed - so often rye loaves end up as lumps of clay! I've been making Joanna's 100% Russian Rye, and it works very well, but it takes a couple of days for the flavour to mature and really develop..

Dom - thanks. Always good to be a source of inspiration!

Choclette - I love your blog completely but I occasionally think it's a shame you can't share recipes for the other things you make, I'd love to see your rye bread!

Foodycat - it made good cheese sandwiches.... so I guess it'd go well with cheese in other forms! Rye is something I need to experiment with more too.

Celia - I think it's because it's only a quarter rye that it's risen so well. The strong white flour I used was an extra strong Canadian one, so I'm sure that helped. I need to try a 100% rye. The closest I've come is Dan's Black pepper rye, and I can't remember off the top of my head what % rye that is.