Blackcurrant and apple creme fraiche cupcakes - an apology and a thank you! 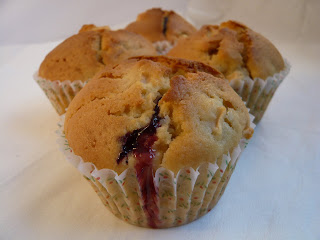 The apology and the thank you are, oddly enough, to the same person. No surprises that it's Dan Lepard, who originally published this recipe in the Sainsburys Magazine in the February edition this year. I've already blogged about it here, but really didn't do justice to this lovely cake. So with a tub of creme fraiche (it was a full fat, French DOC Isigny Ste Mere type, I'm not sure how other types would work) in the fridge about to expire I decided to substitute this for the specified clotted cream. I also chopped up the apple more finely, and because I found the mixture quite stiff, added a fair amount of milk to slacken it (a good few tbsp). I made the cakes in muffin rather than bun tins, which meant that I could add a blob of jam, blackcurrant this time, (which I left alone, not adding any water as last time) and it stayed put with more cake mixture on the top. I used the new season Discovery apples, but only used two rather than three and this time just added extra flour rather than semolina in place of the specified ground almonds. So the apology is for playing fast and loose with Dan's original recipe, but on the other hand it's not as if I'm complaining that the recipe didn't work, after not following it and making my own adaptations! 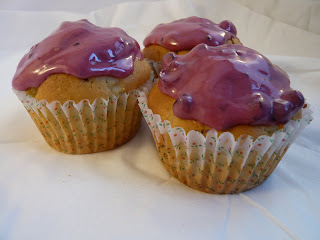 I had some fantastic feedback about these buns - one person said they were 'messy to eat, but absolutely amazing' and a couple of people said they were the best thing I've brought into work yet. I was really pleased that the jam stayed put in a blob, and the soft gooey cake around the jam blob was really delicious. The cake has a close moist texture and the apple had sort of almost dried out during the baking, becoming slightly chewy in the final cake, which was a great contrast to the soft cake and gooey jam and icing. The icing doesn't set at all, remaining sticky without any kind of crust or hardening, which is great, but really, really messy to eat! I tried to get a photo of the inside of the cakes but it was too dark when I was eating them to be successful.

I'm glad I tried the creme fraiche as a substitute for clotted cream though, because it's more readily available for me, and more affordable too, and that'll encourage me to make them again, which is good because they were really, really good, and I definitely want to make these again. I'm wondering if other combinations of fruit and jam would work - chopped pear and cranberry jam or jelly perhaps for autumn? Or apricots and raspberry jam in the summer? So many possible combinations!
Posted by Caroline at 07:00

These look loevly and perfect for autumn. I like the changes you made. Apple and blackcurrant are perfect together

It looks like you've solved the problems you encountered with the first batch. These sound very tasty.

I wonder if dried fruit would work as well, or if you need the moisture from the fresh fruit, as you mention the batter being stiff. I was thinking of a pear and ginger jam combination, but think the jam would be too strongly flavoured for fresh pears.

Peach and raspberry jam would make a peach melba cupcake!

Suelle - yes, I'm pleased that I've solved my previous problems. I'm not sure about dried fruit, I think that the juice released by fresh fruit might well be necessary, it's a very sticky batter. I love the idea of peach melba cupcakes! and your idea of pear and ginger sounds really good, but I agree that pears are a fairly subtle flavour.

They look great and the flavours are making my mouth water! Love the colour of the icing on top too.

Loving the colour of the icing. Blackcurrant and apple crème fraîche, that's a wicked combination :)

These look great and I love your fruity frosting!

These look luscious! There I was feeling sad that I don't get the Sainsbury mag, and I've just googled and here is the recipe on Dan's site http://www.danlepard.com/recipes/2010/04/2466/clotted-cream-cupcakes/ so that's all right. I will have to sub something for the black currants as there is an allergy issue with berries in our house, including currants. Maybe plum jam ? I have a lot of that, what do you think might work?

Jo, I'm sure that plum jam would work admirably! My recipe (from the magazine) suggests letting the jam down with water, but unless it's really stiff I wouldn't bother, it just made it hard to work with last time. Apple and plum sounds like a good combo to me!

C, they look lovely! I don't think you have anything at all to apologise for.. :)

We have so much jam in the house, I must give these a whirl. Thanks!