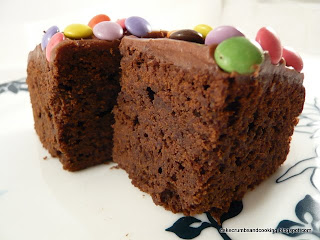 A post from the archives, but this cake is so good that I've made it twice now - I didn't manage to get very good pictures of the first round, but the second time I was more organised. This is such a good chocolate cake - really rich and fudgy and utterly delicious. Yum is all I can say. Forget the January healthy eating plan and start the new year the way you intend to carry on - by enjoying what you eat! 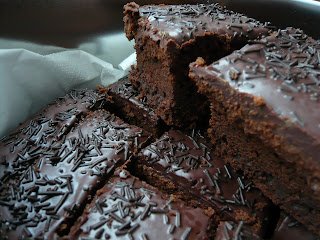 When the June issue of BBC Good Food magazine came out, I flicked through it and as usual spotted a couple of things I wouldn't mind making at some point in the distant future (i.e. I almost certainly won't make those things, but they took my fancy as I looked through) and wondered to myself why I continue to buy these magazines. Then I came across this recipe for chocolate fudge cake. Wow, yum! It added itself immediately to the 'to bake' list and somehow jumped to the top, ahead of other (worthy) recipes that have been languishing on this (metaphorical) list for far too long! You can now tell how far behind I am with my posts!!! (And I originally wrote this paragraph at the end of June....)

I didn't fancy the frosting/icing recipe that was given in the recipe though, and reverted to one I've used before a couple of times, which worked really well with the cake - definitely recommended! 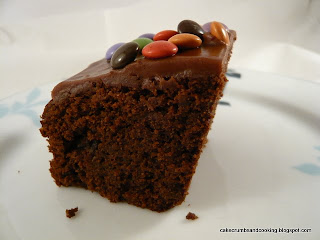 Was it worth it? Yes! I thought this was a really fab cake - moist and rich and chocolately - more so than the standard cake I'd make, but less fudgy than a brownie. In my book this is a good thing - I don't actually like the sort of uncooked feeling I always get with brownies and so this was a great cake - moist and rich but definitely cooked through! As usual I was icing at the last minute and so the icing was a little warm when I sprinkled the vermicelli on resulting in them being slightly melted the first time I made the cake. The second time I made it I used cheery coloured chocolate buttons to cheer myself and my colleagues up in the middle of winter. No matter, the cake tasted excellent and was well received. Make again, oh yes - and indeed I have done! 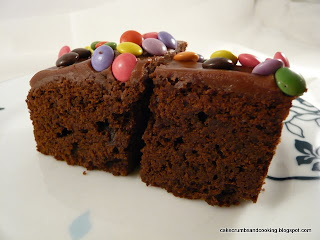 Well received both times it was made - now is that really a surprise? This is a lovely treat-y cake - I think it would make a fantastic birthday cake for the chocolate lover in your life! 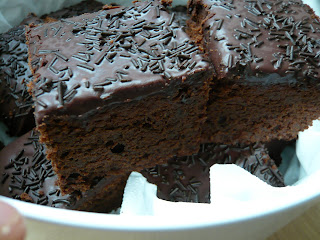 I might have made this one had I seen this recipe first. It looks fabulous!

I love the little buttons, are those mini smarties?

I made this back in June and really liked it too - apart from the frosting, which split, so it's just as well you didn't use that part of the recipe!

Mmmmmm, looks great. I especially love the smarties on top. Cake always seems more appealing to me when smarties are involved, it always makes me feel like there is a party involved somewhere ;0)

Yum yum yum, that looks delicious! Glad you finally got your photos of it.

Excellent, a girl after my own heart ;) Your cake does look good.

I think I still have this magazine ... must look it up, the cake looks delicious.

looks delicious but the original frosting is one I would have to try - I love anything with condensed milk and chocolate - and I am glad you are starting the year as you mean to continue - sounds like there is great baking ahead!

I saved that recipe - seeing your photos makes me want to bake it right now. I love the version with the chocolate vermicelli on top

You know I have made a few brownie recipes recently, but this is now calling out to me.

Joanna - they're not mini smarties, they're actually Silver Spoon coloured chocolate beans. Essentially mini smarties, but the last time I baked with mini smarties they all discoloured to a sort of grey-green - pesky natural colourings.... so I bought artificially coloured ones in case I wanted to bake with them rather than just decorate with them.

Suelle - I remember you making and liking this one. I think I made it at about the same time as you, but obviously am much less organised!

Chele - it's always good when I make more of an effort with decorating, I'm lazy really!

Choclette - I'm always surprised more of my blog doesn't consist of chocolate treats - I love it!

BG - if you haven't got the mag it's on the website - I've provided a link!

Mangocheeks - it's a great recipe - sort of brownie like, but not quite!

Not a surprise at all, great chocolate cake is always a treat! And I love how you've decorated them, C, makes me feel young.. :)