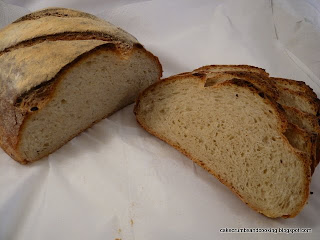 I wanted to try a new bread recipe - it seems ages since I've had something new (bearing in mind that the soured cream loaf I posted recently was made in October or something ridiculous like that!) and after reading about the Mellow Baker's group on Joanna's lovely blog, Zeb Bakes, I decided that as a new year treat (I can justify anything if I try hard enough) I would order Jeffrey Hamelman's book, 'Bread'. I'm not sure yet if I'll bake along with the Mellow Bakers, or just pick and choose what I fancy from the book, but it clearly has some interesting and different recipes in it. 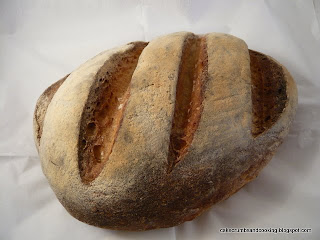 I asked Joanna which recipes she'd found particularly good from the book and she gave me a little list of yeasted breads that she had found very successful. I decided to make the Corn Bread. I've previously made Dan Lepard's Semolina BBQ buns and wondered if this would be similar in any way. I followed Joanna's instructions here, using fine semolina as this is what I had available. I think I probably left my bread for longer than 45 mins x 2, but I don't think it suffered too much. I think it might be overproofed a little, as there wasn't an awful lot of oven spring. The slashes have opened quite nicely, but they're quite deep and I was probably expecting more rise, however, I did leave the loaf to proove for about 90 mins which is possibly why! 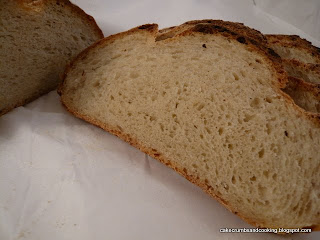 The bread is nothing at all like Dan's Semolina BBQ buns, but is just as delicious. The overnight poolish definitely adds a good tang and flavour. The crust is nice and thin and well flavoured with a close grained crumb making it really excellent for sandwiches. A really good loaf to start with (and I haven't even received the book yet!) so thank you to Joanna for recommending it and I'll look forward to looking at all the other breads the Mellow Bakers have made and deciding what to go for next!
Posted by Caroline at 17:15

Looks great to me, bet its lovely toasted too.

Great looking bread C! So pleased you are happy with it. Thanks once again for the mention. I guess I'd better bake some bread soon to catch up :)