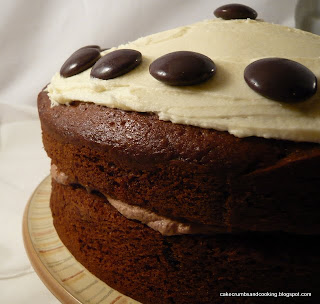 One of my colleagues had very generously given me some baking ingredients, so I thought it would be a good idea to make the most of these. She had given me various sugars, cocoa and chocolate chips so I decided to adapt an old favourite Nigella recipe to use these ingredients. The recipe in question is the buttermilk birthday cake recipe. Luckily I can find a copy of the recipe on the internet already, as Nigella seems to have removed quite a lot of recipes from her new website (not that I can complain really - they're her recipes after all!) but this one is in the Guardian newspaper, so the link is here. The alterations I made were to add 30g cocoa powder and 38g each of white and dark chocolate chips (it was meant to be about 50g each, but I didn't measure them beforehand, just tipped about half from the packets. Apparently I'm mean in my estimates!). I also used 1 1/2 tsp baking powder rather than the 1/2 tsp mentioned, explained below! I baked the mixture in two 8"/20cm sandwich tins for 35 minutes. 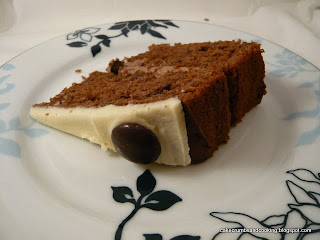 I was really surprised by how much the cakes rose. Quite annoying really because I was planning to sandwich them together, which is difficult when they've got massive peaks on them! Although I've just noticed that in the recipe in the Guardian there's 1/2 tsp baking powder, whereas in my copy of How to be a Domestic Goddess there's 1 1/2. That would probably do it... 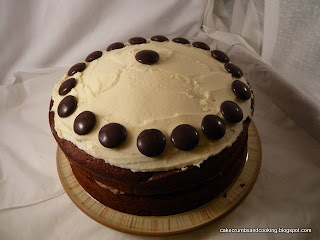 Anyway, I forged ahead in my plan to sandwich the cakes together - slicing the top off the less peaked cake and turning it upside down created a smooth and relatively stable surface to start icing the cake. Keeping with the two tone theme started by the chocolate chips I decided to have both chocolate and vanilla buttercream frostings, and wanted the vanilla on the top to contrast with the decoration - I used lovely shiny Minstrels, another Christmas leftover. In all honesty I'll probably be using things I bought at Christmas in April so although I can barely remember Christmas now its legacy lives on....
This is a lovely, tasty, moist chocolate cake. It isn't too sweet, which works well with the sweet buttercream frosting and my colleagues had no trouble in dispatching this cake in double quick time! 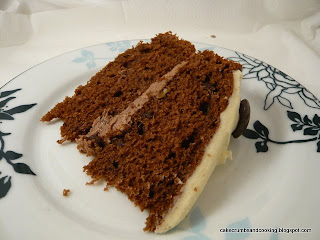 This looks delicious! I love your presentation. Good use of your ingredients.

Very clever of your colleagues to encourage you to bake for them! The cake looks really amazing. The minstrels are just the right thing!

Beautiful cake - the minstrels look so classy as the decoration.

Looks delicious! I know what you mean about Christmas leftovers, I still ahve some goodies I haven't even opened yet.

C, I'm surprised you were annoyed by how well the cakes rose - my first reaction was to admire what a lovely tall and impressive cake you'd made! :)

Lovely of your colleague to give you baking goodies, and even lovelier that they all got to share in the finished treat!

Foodycat - thank you. I think this colleague genuinely wanted to give me something towards the cost of the cakes I make for them. I really don't think she would have minded if I hadn't made anything for them with the ingredients, but it was very kind of her!

Katie - I'm glad I'm not the only one with Christmas goodies still to use!

Celia - I suppose annoyed is too strong a term really. It's just that so often I bake cakes that size and the tops come out flat, which would have been ideal in this case, but it didn't matter! I was pretty pleased with the way it turned out too! My colleagues (on my current training rotation) are really generous, lovely people, I'll miss them when I have to rotate to a different department (all too soon, sadly :-( )