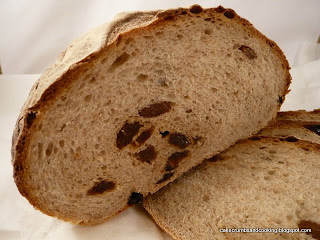 I have the lovely Joanna over at Zeb Bakes to thank for this bread (via gentle encouragement and support!), and hopefully many more in the coming months. I've admired her baking for many months now, and have followed her Mellow Bakers posts with great interest - they all look so good, and it's really interesting to see how many different kinds of bread you can make and which ones appeal to different people. You can see all of Joanna's Mellow baking here - inspiring stuff, and the Mellow Bakers forums are here.
Anyway, just after Christmas I decided to take the plunge and order the book - Jeffrey Hamelman's Bread, so that I could join in the action. After far too long a wait (I'm impatient when it comes to receiving things through the post) the book arrived and I jumped straight in with one of the January Mellow Bakers recipes.
The book itself is quite thick and I confess to not having read any of the preamble - it feels almost like I'm a small child with a new toy - I want to just play straightaway and not read the instruction book first! However, I'm really looking forward to reading all the technical detail behind the bread making process soon. This bread must have been pretty forgiving because it still turned out well! 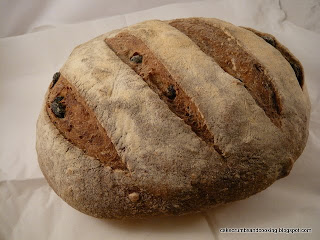 It's a sourdough/yeast hybrid (and yes, whisper it quietly - that means I've got my sourdough starter going again....) and I think that the yeast probably did most of the work in this bread. I could detect a faint sourdough tang, but it was very much in the background. I suppose this was a good thing really, given that I've been eating this buttered for breakfast - I wouldn't have wanted it to be too assertively sour! I halved the quantities given for home bakers and converted them to metric too, for the next time I decide I want to make this. Next time I work with a bread that requires additions, I'll mix them in by hand - my mixer didn't really distribute the raisins all that well - as you can see in the top photo, though further through the loaf the distribution was better - see photo below.
I really enjoyed this bread as a first foray into the book and am looking forward to baking more from it - there are so many different breads I want to try. It's a good job that the group is mellow - there are more breads for this month that I'm not going to get round to making (though this is partly because I didn't receive my copy of the book until pretty late in the month - excuses, excuses!) so it's great that there's no pressure to make them all. 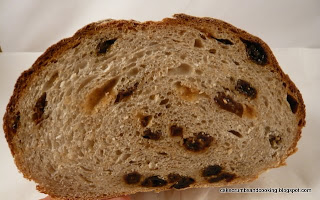 That loaf looks really good - I must find the confidence to tackle yeast doughs again!

What a beautiful bread! Raisins are one of my favourite snack foods.

That bread looks soooooooooooo good, what is it like toasted? (I have a real thing for toasted fruit bread at the mo!)
Must extend thy digit and give the sourdough starter another try!

It looks like such a fabulous bread. I is quite cruel to taunt us with it actually, when we can't reach in and try a slice :)

Beautiful, C! I could do with a toasted slice right now for breakfast. Hmmm..I think you've inspired me to make a loaf of fruit bread today!

Thank you for the sweet words C and the links! I'm so pleased that your first foray into the Hamelman book was so happy! I think you're an excellent bread baker on the quiet.... and your starter looks like it has woken up beautifully and is hard at work :)