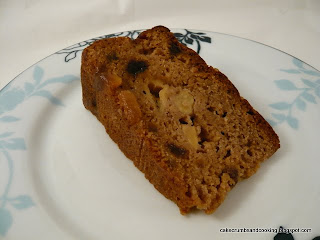 It's seville orange season now, time to make marmalade (more on this in a future post...) and therefore, time to use marmalade in baking. When I was thinking how I could use some of my newly created marmalade lake (actually that gives the wrong impression; I do have a lot of marmalade now, but it isn't a lake because it has successfully set!) I looked through a couple of my newer cookery books and lo and behold, found this recipe in Nigel Slater's Tender Volume II, page 684 for those who have the book. I'm trying to make more of an effort to get inspiration from the many cookery books I own and this cake was definitely inspired by the apple chapter of Nigel's book. There are lots of other lovely looking recipes in there too - mmmm, apples! 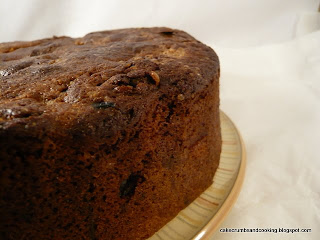 I first made this cake last year when the recipe was published on the Guardian website, here (scroll down past the fish pie recipe) and have even noted down that I made it on the day it was published. Sadly, almost year later it remained unblogged, but all is well as I'm correcting that now! I remembered to take photos of it, but didn't get a piece to eat - it was popular and all got taken before I managed to get a piece for myself. This should really have been a clue to how good it is, and I did keep meaning to make it again (the road to hell is paved with good intentions and all that...) but the opportunity never really arose again until now. 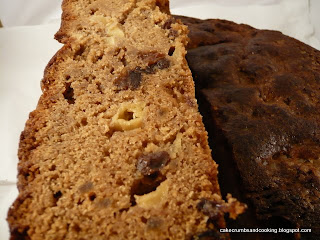 I was slightly worried that the relatively small amount of baking powder in the recipe wouldn't give the cake enough lift, but I'm glad I trusted Nigel's judgement on this one, because it was fine. I think the wholemeal flour added to the flavour and moist texture of the cake too, and complemented the other fruity flavours. Although the top looks quite dark, it really didn't taste overdone at all, it was just right. The only change I made to the recipe was to omit the orange zest, simply because I didn't have an unwaxed orange to hand. 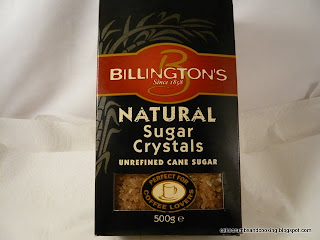 I used a mixture of demerara sugar and the sugar crystals you see above to sprinkle on the top of the cake - don't miss this step (I'm terrible for remembering final steps like this - once the cake is in the tin my mind just says oven straight away usually). 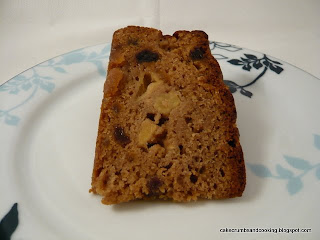 You can see just how deliciously moist this cake was - chunks of soft apple, strands of contrastingly bitter orange marmalade peel and juicy raisins all set against a delicately spiced soft moist crumb. The finishing touch was the crunchy sugar on the top - it was such a good textural contrast to the rest of the cake that I wished there had been more. This isn't a rich fruit cake in the sense of wedding cakes or Christmas cakes, but it's certainly one of the nicest fruit cakes I've eaten for a long time. I will definitely be making this again. 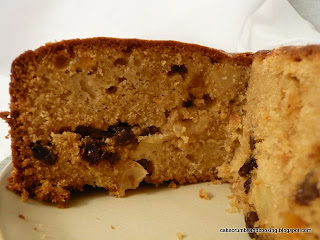 The final picture here is from last years cake - the crumb is a much lighter colour because I used white self raising flour rather than plain wholemeal flour plus baking powder, but much the same delicious moist texture. I can also see from other photos that I forgot to sprinkle last years cake with demerara sugar, which is a pity because that added a lot to the pleasure of eating this cake.
Posted by Caroline at 18:30

Marmalade is by far my favourite spread for toast - and I'm always baffled at the fact that not many people feel the same! Ive never thought to use it in cooking. What a fantastic idea! This cake looks divine! Thanks for the recipe.

Wow you've been on a roll lately with all your posts. I find Nigel recipes never fail, either in the creating stakes or the pleaseing people stakes. Sounds like this is another success story ;0)

Johanna - I'm quite glad I didn't put the orange zest in it, I sometimes find that it can be overpowering and this was really well balanced without it. You're right, it's very much a storecupboard cake, which is great because it means it's easy to make!

Elizabeth and Jared - I don't eat toast as often as I'd like, but marmalade is such a good thing to have on it, especially with plenty of butter! I'm glad you like the look of the cake!

Chele - I've got so much in my archives I need to step up my posting frequency - doesn't mean it's going to happen though! This was definitely a Nigel success!

I saw seville oranges on Borough Mkt last week and, other than marmalade, I wondered what to do with them...now I know! Looks great

We adore apple cakes, but have never tried this one - thanks for the headsup. Nigel's book is just wonderful!

CC - I think you still need to make the marmalade first! I read the recipe as calling for the zest of a normal orange rather than a seville, but that would be an interesting twist.

Celia - if you like apple cakes I think you'll adore this one and a great use for some of your homemade marmalade! Do let me know if you try it. Nigel's book is fab isn't it, I want to try lots of the recipes in Tender, both volumes I and II!

Just eating some elderly rye and apple cake (found in the freezer) I think a Dan L recipe. And thinking how very good apple cake is and what am I going to do with all the marmalade - and now I have a new one to try, I think I've even got that book here somewhere - (rushes off to look- Oh Nigel, where are you ????) If you recommend it I will have to try it

Joanna - I really would recommend it - it's delicious, and a great use of marmalade. Such a lovely cake with lots of different flavours.