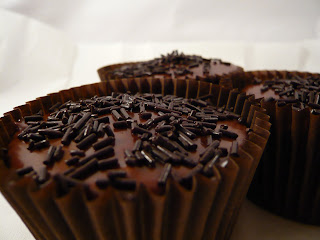 Well, I wanted chocolate. Hang on, forget the want, I needed chocolate (I often do....). Not a heavy, dense cake, but something light, quick to make and enjoyable to eat. Not pure chocolate but with a little twist. And then I remembered the lightness of the Hummingbird Bakery chocolate cupcakes I made almost a year ago. They were deliciously chocolately but light as a feather. This incarnation is based quite strongly on the Hummingbird Bakery chocolate cupcakes but is my own interpretation with adaptations as time has passed and the whim has taken me (not to mention the ingredients available in the pantry...). Hence orange. I do enjoy a good chocolate orange combination, and used to adore Terry's Chocolate Orange, but now find it less pleasing for some reason. These taste similar, but the orange flavour is less overwhelming, and less artificial. Better, I think. 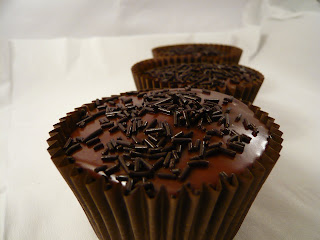 Quick to make, easy to eat - what more could you ask? My colleagues loved these and they all disappeared rapidly.


Method
- Preheat the oven to 170C/Gas 3. Line a muffin tin with 12 paper cases.
- Place flour, cocoa powder, sugar and butter in a large bowl. Beat on slow with an electric mixer (handheld or stand, I used handheld) until you get a sandy consistency and everything is combined. I don't find this works very well, flour and sugar sprays everywhere and it is all lumpy. So I add half the milk at this point too. Beat until no longer lumpy (this took ages, I thought the lumps would never go)
- Whisk the remaining milk, egg and orange zest together in a jug and add this to the mixture. Beat again until no more lumps remain (again, seemed to take a while....). I'm really not convinced about this method, but the cupcakes seem to be good in the end, so I'm persevering for now.....
- Spoon the mixture into the paper cases and bake in a preheated oven for 20 to 25 minutes, mine took about 20.
- Remove from oven and cool on a wire rack.


When the cupcakes are pretty much cold:
- For the frosting, heat the butter, chocolate and golden syrup gently in a pan until the chocolate is half/nearly melted. Stir until completely melted then add the icing sugar. Beat until smooth, adding about 25ml boiling water. Cool slightly until starting to thicken up.
- When the cupcakes are cold, pour/spoon the frosting onto them, sprinkle with vermicelli if desired (they do look pretty with vermicelli!) and leave to set. I found the frosting started to set very quickly, especially when I poured it onto the cupcakes. In one go was the best method, it was difficult to add more frosting to the cupcakes without creating an entire new layer. The frosting was pleasingly runny and didn't need any encouragement to get to the edge of the cakes, and set with a lovely glossy finish. I suppose you could have used orange juice in the frosting too, but this didn't occur to me until too late.


The cupcakes are slightly on the small side, but in this case that's no bad thing. Reason being, the frosting is quite runny and having cupcakes below the level of the cases means that the frosting is contained and doesn't escape. There was a little extra frosting, which would have been really good eaten warmed up over ice cold vanilla icecream. Yum. Or it would have been if it had made it to the icecream....
Posted by Caroline at 16:43

They look great. I love the Hummingbird cook book, hasn't failed to inspire me yet ;0)

The cupcakes look lovely and the cupcake cases compliment them really well.

Oh these look so good and you can't beat the choc/orange combo!!

These look wonderful - much nicer than bought ones - tastier too!!J

I love chocolate sprinkles! if you ask me they arent used enough! Love it when full size cakes have the entire outer coated in them!