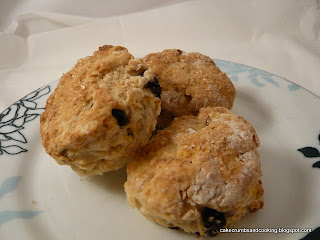 Inspired by Johanna's recent post about her scones, and by Choclette's recent chocolate chip scones, I decided it was long overdue for me to make some more of these delicious treats. I particularly enjoy scones because they're so good for snacks and seem a good way to have a sweet treat without too much fat or sugar.
I had a large pot of yogurt in the fridge that really needed to be used up and recalled that a few months ago Sainsbury's magazine had a feature written by Dan Lepard for scones. There's a basic recipe and then various sweet and savoury variations; blueberry clementine, triple-chocolate pecan, double ginger and apple, almond cherry and then savoury red chilli and tomato, onion, herb and bacon. I can't say the savoury ones are anything I'd usually want to try but the tomato based ones look really good! So, taking inspiration from the blueberry clementine recipe, I decided to make blueberry orange flavoured scones. 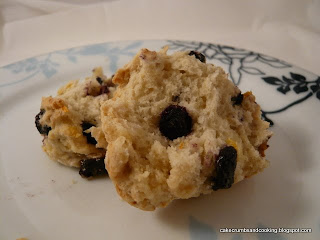 I've adapted the recipe a bit to suit what I had available (who has 25ml of double cream hanging round? and what do I do with the rest of the pot once it's open? that ingredient went pretty quickly!). The original recipes can be found in the November 2010 issue of the Sainsbury's magazine.
Blueberry and orange yogurt scones
Ingredients
175g wholemilk yogurt
75g caster sugar
400g plain flour
2 tsp cream of tartar
1 tsp bicarbonate of soda
50g cold diced butter
zest of 1 large orange plus 50ml juice (but see below)
100g dried sweetened blueberries
Method
- Preheat the oven to gas 6 1/2/210C. Put a piece of baking parchment on a tray.
- Stir the sugar into the yogurt and leave for a few minutes to dissolve.
- Sift (and I actually did - normally too lazy) the flour, bicarb and cream of tartar into a large bowl.
- Rub in the butter, then add the dried blueberries and stir to mix.
- Zest the orange into the yogurt mixture and add the juice to this.
- Mix the wet ingredients into the dry and bring together to form a dough. At this point I thought it looked a little dry, but persevered, turning the dough out and trying to form it, but ended up putting it back in the bowl to add some more liquid. I think it needs about 2tbsp more liquid than stated in the ingredients above.
- Pat out to about an inch and a half thick and cut out scones in the size you choose. I used a small cutter (2 inch) and got 19 normal scones and a massive offcut scone!
- Moisten the tops a little (I used water here) and sprinkle with demerara sugar.
- Bake for about 12-15 minutes until lightly golden brown.
- Allow to cool on a wire rack, or eat warm if you really can't wait! 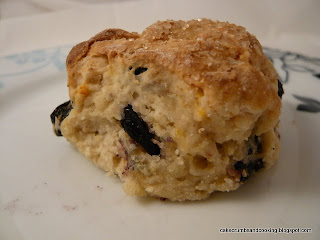 This recipe differs quite a bit to my usual recipe. I usually use self raising flour rather than plain plus raising agents and more butter but less sugar. They were reasonably successful but I didn't think they were quite as light as my usual ones. However, this could be due to me overworking the dough with it being initially too dry and having to add more liquid. The flavours were great though - dried blueberries are delicious, it's just a pity they're so expensive usually, and the orange flavour made them interesting enough to eat without butter, although served slightly warmed and with butter would be my favourite way to eat these. I ought to give the recipe another go, perhaps the apple and ginger variation - two of my favourite ingredients!
Posted by Caroline at 22:35

This sounds a good flavour combination. I hardly ever make scones - they seem to be neither cake nor bread, and usually need eating quickly - did adding yogurt help them keep longer?

And there was me thinking I had made the original chocolate scone ;-) Your blueberry and orange combination sounds really good as do some of the others. Thanks for the mention.

Suelle - it was a good flavour combo. To be honest I don't really know if the yogurt made them keep better. Colleagues got most of them the day after I made them and I froze the rest as I usually do for scones. I would hazard a guess at not particularly keeping for longer - many standard recipes use buttermilk which is very yogurt like, and don't profess to keep well.

Chele - one of the nice things about these scones is that they're well flavoured enough not to really need massive dollops of clotted cream, although I guess it would be nice!

Choclette - I thought yours were the original chocolate scone :-) I think apple and ginger is definitely next on the baking list....

Good choice! I love the combination of blueberry and orange. Plus, I think that yoghurt makes all baked goods that little bit better.

Looks delicious and love the flavour combo. Who can resist a freshly baked scone?