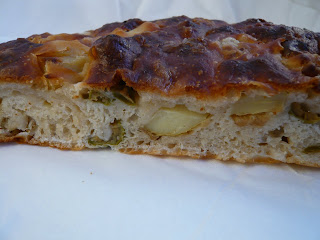 Another of Dan Lepard's fabulous bread recipes, recreated fairly accurately this time (well, with respect to ingredients anyway!). You can find the recipe here. The changes I made were to halve the recipe and omit the dill as I didn't have any. My plan was to make this for lunch on a day that J was visiting, but my plan was set awry as she arrived early and had to leave earlier than anticipated too. This meant that we didn't want to hang around the house waiting for bread to prove and bake. I'd managed to get the dough to the prodding out stage, so I stuck it in the fridge and hoped for the best. On our return about 90 minutes later I removed it from the fridge while the oven heated up and baked from cold. Luckily the dough was forgiving of my misdemeanors and the finished loaf was still lovely. I gave half to J, who took it home and shared it with a couple of friends over the next day or so, all of whom reportedly enjoyed it greatly. I think this bread may cause differences of opinion. I thought it was really, really delicious. J didn't really like it though - the addition of potato to bread was just too odd for her, and she isn't the world's greatest fan of olives anyway. I hadn't had a bread containing chunks of potato before but I thought it worked really well - the contrast of textures was really nice. The potato was really soft and smooth. The actual dough was great too - it had a really good chewy texture. This was quite a dense, substantial bread, but that made it perfect for lunchtime, with a good chutney on the side and a good chunk of well flavoured cheese. I think the next time I make it I'll reduce the amount of potato slightly, and increase the olives, because I didn't quite get enough olive flavour for my liking.

I really liked this bread, C, glad you did too! :)

What an idea - roast potato bread (I'll put my olives in your slices though!) looks lovely. Love the idea of flavours and textures.

Sounds delicious! I love these flavours together. Great with a little antipasti plate.

Sounds good to me - very good in fact!

I haven't made this one, ooh it doesn't half look good! I must give it a try...

I always have left over roast potatoes - I'll have to give this a go!!

Celia - I remember you saying how much you liked this bread - me too!

Chele - I'll happily have your olives!

Katie - it would be perfect with a selection of antipasti.

Choclette - it is very good!

Joanna - it's a very tasty bread, and fairly simple to make too.

BG - Leftover roast potatoes would be perfect in this!