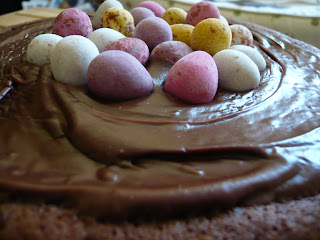 Did you really think I'd leave you over Easter without a chocolate cake of some sort? I think it must be the law to eat chocolate at Easter (although it has to be said that I lack the will power of even a gnat and therefore didn't give up chocolate for Lent....) so here is this year's offering.

It was also T's birthday on Easter Sunday (which doesn't happen all that often, the coincidence I mean, obviously both Easter and the birthday happen each year without fail...), so Happy Birthday T, it was really lovely to spend the day together and you'll get your present when you've decided what you want (hint, hint!). So this cake was for T's birthday.
I had creme fraiche in the fridge and wanted to use it up, and vaguely remembered seeing a cake with creme fraiche instead of butter in it. I'd made this cake before, but it had sadly risen like a souffle and then collapsed into an ugly, inedible (and it's not often that happens) heap. (I hasten to add that this was my fault - I changed the type of flour and used half fat instead of full fat creme fraiche, still it contributed to my avoidance of any cake using separated eggs!) Determined to both avoid a repeat of this catastrophe and also to use the creme fraiche, I used this recipe for inspiration, but essentially made up my own cake! Note to self: when making up cakes and diligently writing down ingredients, method, oven temperature and cooking time, do not record this vital information on a scrap of cardboard. With the best will in the world, you will lose it (again....second time in as many weeks.... sigh). 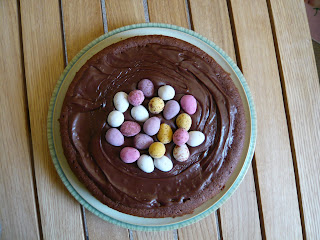 Creme fraiche chocolate cake
Ingredients
3 eggs
125g caster sugar
250ml tub full fat creme fraiche (I used a French style one)
115g self raising flour
30g dark cocoa powder (Green and Blacks is good)
For the chocolate icing
40g butter
25g golden syrup
50g dark chocolate (70% solids)
160g icing sugar (I used a mixture of normal and unrefined because I ran out of normal...)
Method
- Grease and line the base and sides of an 8" deep cake tin. Preheat the oven to Gas 4/180C.
- Whisk the eggs and sugar together until well combined, about 2-3 minutes with an electric hand whisk.
- Add the creme fraiche and beat until combined.
- Sift in the flour and cocoa powder and fold together until there are no more streaks of flour in the mixture.
- Pour into the lined tin and place in the oven. I put mine on a baking tray because I was using a loose based tin and was worried about mixture escaping. I'm happy to report that nothing escaped!
- Bake for around 40-45 minutes (this is where my little bit of cardboard with timings written on it would have come in really handy. That or a better memory, I'd be good either way!) until a cake tester comes out clean and the cake feels firm to the touch. The surface of my cake had cracked quite a bit, but it didn't matter as I was planning on icing it anyway.
- Turn out carefully and leave to cool on a wire rack. The cake will sink.
- When the cake is cool, make the icing.
- Melt butter, syrup and chocolate in a pan then add icing sugar. Beat briskly until smooth and pour onto cake. I found I had a little too much icing, but no matter, it tastes good warm on vanilla icecream! Scatter with decorations of choice - Cadbury's mini eggs here. Yum!
The glaze is one I've used before, and is fudgy and grainy and delicious! It went perfectly with the fudgy cake, and, ahem, disguised the fact that the cake was perhaps not standing as tall as it might have been. Nothing like a pool of icing to level off a slightly sunken cake. I should have called it sunken souffle cake, pretended it was exactly as I was expecting and no-one would have been any the wiser! I see Delia has a similar idea.... 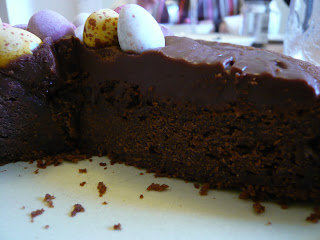 Taste? Ooooh, yum! You can see from the picture above just how dense and fudgy the cake was - really good. Not too sweet and the cake and icing went together really well. T cut himself a good big slice to enjoy with cream - well it was his birthday and Easter sunday after all. J and I enjoyed it greatly too.

You've been busy with your Easter baking, C. Everything in the last 3 posts looks good, but this cake looks superb! I'm surprised at how dark and dense it looks, using only cocoa.

Looks really delicious, I love a dense cake like that.

It looks gorgeous C! Love the look of the crumb and the thick chocolate topping - yum! How many times have I written my own notes and then lost them - when will we learn? :)

Now that IS a chocolate cake. Gorgeous.

Yum! That looks so good I could dive right into that no problem at all ;0)

Well done you for having a crack at a previous failure! This looks fantastic. love the eggs on top.

My gosh this looks phenomenal! It all hinges on the quality of the chocolate you use

C that looks gorgeous! I really like the idea of creme fraiche in the cake.

Wow - it looks almost truffle like in its richness!

Oh, this cake is fantastic! Love it and bet it is so very tasty!

It looks absolutely yummy, I don't think I would be brave enough to try my own recipe!

Oh, a cake using creme fraiche instead of butter - how interesting. I shall have to try it, it sounds as though it was a resounding success and I love dense and fudgy.