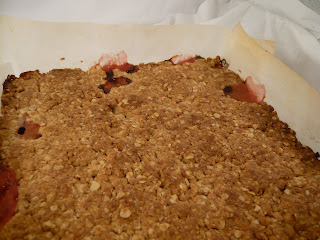 Well, still here and still blogging. I'm being held up not by a lack of things to blog about, but by my disorganisation - I have lots of things to blog and insufficient pictures of them. So you'll have to use your imagination for this one I'm afraid. I wanted to take a picture of the inside after cooking, but forgot and now they're all gone. I'd make them again, but the list of recipes on my 'to bake' list is growing rapidly and I don't want to rebake these just yet! I'll try and be more organised next time!
The nights are drawing in rapidly and I went to work and came home in the dark for the first time a couple of days ago. Autumn is definitely here and with it come the apples, plums, pears, parsnips, leeks, pumpkins, squash and all the bounty of harvest time. I wanted to make the most of some lovely plums I had picked up at the greengrocer, I think they may have been Marjorie Seedlings, not the hard unyielding type imported from South Africa all year round, but luscious, juicy English plums in their proper season.

Plum and oat seem like natural partners to me, think of warming plum crumble with an oaty topping and you'll see what I mean (plums and almonds also spring to mind, but not for me I'm afraid!) so this recipe from Delia Smith really appealed. I've made it before (pre-blogging, many, many years ago) with apples, so I knew that it'd be really good (and let's face it, most of Delias recipes are really good, the most recent 'Cheat' series excepted....). I'm not a huge cinnamon fan, but if you are, go ahead and add it in!
Plum oat squares
450g fresh plums (although I only had about 350g)
5oz/150g porridge oats
10oz/275g plain flour (Delia specifies wholemeal, but I didn't have it)
1 tsp salt (which I omitted as I used salted butter)
8oz/225g butter
4oz/110g light muscovado sugar
Method
- Preheat the oven to 200C/Gas 6/400F. Grease and line an 8inch/20cm square tin with parchment paper (as seen below).
- Prepare your plums - wash, cut in half, remove the stone and slice fairly finely. Set aside.
- Melt the butter with the sugar gently until the butter has melted. Stir in the oats and flour until well mixed.
- Take 1/3 of this mixture (Delia says 1/2, but if I take 1/2 at this stage, I find I haven't got enough mixture to cover the fruit later on) and spread it over the base of your tin. It won't be a very thick layer, so just keep moving it about until the base is covered.
- Spread the plums evenly over the oaty base.
- Cover the plums with the remaining oaty mixture. I dollop it on in small amounts, dotted around because if you dump it all in the middle, it's really difficult to spread it out. This is where it's handy to have 2/3 of the mixture left to ensure that all the fruit is covered.
- Place in the preheated oven and bake for 25-30 minutes, or a little longer if you want it really crispy. It's very forgiving - I think I left mine in for 45 minutes and it isn't in the slightest bit burnt.
- Remove from the oven and allow to cool for 10 minutes or so before cutting. Allow to cool completely in the tin. 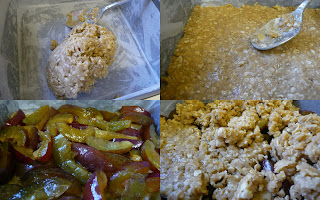 I really love this recipe - the oaty cakey bit is chewier than a flapjack and really moist and delicious, with a lovely contrast from the soft, juicy plums in the middle. Yum, yum, yum! Disappeared pretty quickly at work too, hence being unable to get a photo of the innards of the slice - trust me, it's great! A lovely autumnal way of using plums, I think I'll try apples next time. Not sure whether cookers or eaters would be better though - what do you think???

plum and oats - two of my favourite things! These look lovely. I'm just having a nice cuppa whilst typing this and a plum oat square would be most welcome!

I just made this to use up a mango that was lurking in my fruit bowl. Worked a treat!