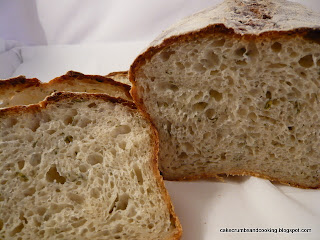 I was very interested to see that Dan Lepard's Saturday Guardian recipes this week focussed on using potatoes in baking. There is an interesting introduction to the recipes where he discusses the qualities that potatoes bring to a recipe, either raw or cooked. I have baked with potatoes in bread before on a couple of occasions and had quite good results so I was keen to try the recipes this week. The loaf appealed more than the potato cakes (although they sound pretty good too - for another time I think) so I added dill to my shopping list for the weekend, already having the rest of the ingredients to hand. 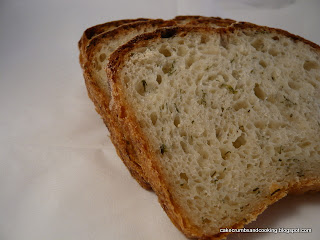 As is often the case, I halved the recipe. As I was making it, the dough was very wet and sticky - but kneading on plenty of olive oil made the dough easier to handle. I was concerned that it was sufficiently wet that I'd end up with a frisbee of bread - not quite my intention, so I decided to bake it in a 2lb loaf tin. This was a little large for the quantity of dough, but the dough just about reached the top of the tin. I had trouble slashing the loaf as it was quite wobbly as I put it into the oven (I don't think my dough would have stood as a loaf) and I didn't really get any oven spring, but then I wasn't careful with timings and had probably left it too long before baking. My own fault.
When the loaf had had about 40 minutes (I think I baked at Gas 7 for ten minutes then Gas 6 rather than Gas 7 all the time - I prefer a lighter crust) I turned it over to brown the base of the loaf. At this point I was rather worried because the crumb felt very, very soft, and indeed, the bottom of the loaf did sink a bit when it was finishing the baking upside down. 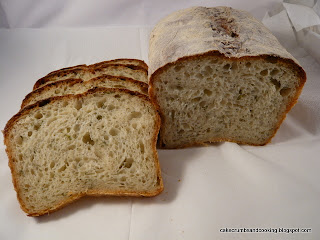 I had visions of cutting into the loaf and the middle squidging out at me, but thankfully my fears were not realised! The crumb is quite open and very, very moist (but not in a 'wet' way, which would be bad). I did use quite a bit of dill (and you can see it in the crust) but my tastebuds must have been killed by years of sugar or something because I didn't really taste the dill. It isn't  a herb I've used much before though, so I probably missed the subtlety of the flavour. Though on reflection as I've eaten more of it, there is a distinct flavour, it's just a new one for me. I think this is the kind of bread that grows on you. At first I wasn't all that impressed, but I am getting to like it more the more I eat it. I think, all in all that this was a good bread, but it isn't quite to my personal taste. The volume of potato is quite big and this affects the crumb significantly. I'm sure that I could get used to this style of bread, but life is about choices, and although a good recipe, this one isn't for my tastes. 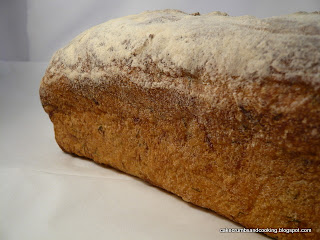 It has started me thinking about potato in dough though - and I am wondering what effect substituting a small part of the flour in a bread dough with potato starch/potato flour would do. Hmmm. I feel some experimenting coming on! 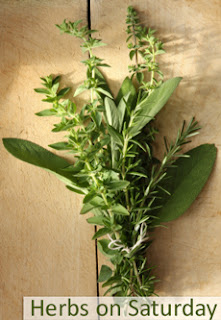 I'm linking this up to Herbs on a Saturday, a blog hop run by Karen of Lavender and Lovage.
Posted by Caroline at 17:40

Potato and dill in a bread? sounds interesting. I tried a chocolate potato cake a few months ago and it was amazing! Your loaf looks really good, cant wait to hear about your experiments :)

I have always been a bit wary of potato in yeast breads, I love them in pancakes,griddle cakes and also the famous potato griddle cakes of course, but I have tried a potato bread before and I was a bit luke warm about it all. Dill in bread however is a different matter, I LOVE it. I have to say that the bread in the photos looks amazing and the crumb looks good too. Have you tried this toasted yet? A fabulous entry for Herbs on Saturday thanks!

I think your open crumb looks really good. Dill is a flavour which I can never really recollect until I taste it again - I do know it's good in a potato salad so this bread should have an interesting flavour.

I think it looks great - and I am a huge fan of dill. This looks like it would make magic toast.

Your crumb looks beautiful, open and golden and I sympathise completely with this thing about getting the crust just how you like it. It might be worth, one day, trying baking in a closed pot, what the Americans call a Dutch oven, or rigging a cover for your tin, something like a pullman. If you can cover the loaf while it is baking, you can keep the temperature up,the crust stays thinner and paler and you can brown it to your personal taste at the end of the baking. It is a bit of a faff. I love dill, but not sure whether I want a whole loaf tasting of it. Always interesting to read your posts as you put so much good detail into them !

it really does looks very soft and 'airy' ... I must give this a go!

I imagine this bread would be perfect toasted with some smoked salmon, I love dill and salmon.

wow - i would never guess there was potato in that loaf; how clever! Shame it wasn't to your taste but I bet you can adapt it to something that is!

I'm always intrigued by the crumb of potato loaves - they're always very tender and moist, but not wet, as you say. This definitely looks like one to try, thanks C! :)

It's all about the crumb, and that looks perfect C. I haven't played enough with potatoes in bread, you might have convinced me other wise :-)

The crumb on your bread looks fantastic C. I keep meaning to try potato bread, but haven't done so since I was a teenager. Dill weed in bread sounds like a lovely idea and I must try it. I often add the seed but never though of adding the green bit - just so much to try.