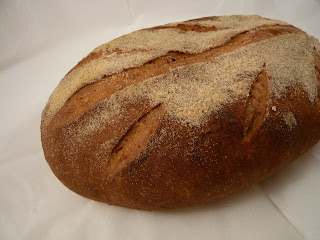 Well, clearly that isn't a bun (unless you are exceptionally hungry!) but I did want to try Dan Lepard's latest bread recipe published recently in the Guardian newspaper (and discussed here on his forums) and a loaf suits my purposes better. It seems to be ages since I've tried a new bread recipe (being happy with my current loaves) and I fancied a change and since semolina was to hand this recipe looked perfect. I would like to try the shaping technique for the buns at some point in the future though. Both Joanna at Zeb Bakes and Celia at Fig Jam and Lime Cordial have made them with fabulous looking results and being a Dan Lepard recipe I knew it would work, better than that, I knew it would work and be amazingly tasty too!!! There aren't many cookery writers/bakers out there that you can confidently expect to give you a stunning recipe each time. Dan Lepard is one such baker!


Due to freezer space issues at the moment (i.e. my freezer is absolutely choc-a-bloc) I decided to make a half recipe, so I'm giving my quantities below as a reminder to myself of how it actually worked out. I also baked for my usual lengths of time with this shape and size of loaf; steamed oven and gas 7 for 10 minutes, gas 6 for 18 minutes, turn over and return to the oven for 10 minutes.

Taste? This was the softest loaf I've had in ages, I don't know which of the 'additions' to the basic formula of flour, salt, yeast and water provided this effect and in reality it was probably the combination, but the bread was soft and moist yet still with the texture you only get from homemade bread that reminds you that you've eaten something. I think what I'm trying to say is that unlike commercial bread, if you squash this you don't get something resembling the dough it was made from! (If you've never tried that, do - it's informative in a scary way - Chorleywood process white sliced bread tends to form something resembling dough if you squash it - yuk!) The only thing I'd do differently next time is to use a very mild honey. I didn't quite manage to halve the honey, and I used the Tasmanian Leatherwood honey that I used in this honey cake. The flavour is quite strong and there is still a trace of it left in the baked bread. Great for morning toast, but less appealing for savoury sandwiches. This is my error though, for using a honey I knew to have a strong flavour, use a neutral one and you'll be fine! Definitely on the 'make again' list. 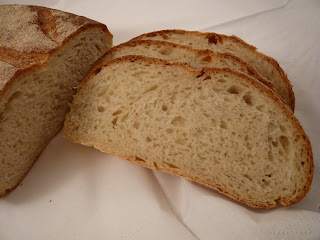 C, you are very clever! I never thought of baking it as a loaf. I know exactly what you're trying to say too - the end result is soft, perhaps reminiscent of commercial white bread, but just so much better and non-crappy. It made such a nice change to our usual chewy sourdoughs!

Celia, I'm glad you understand what I'm trying to say, you've put it much better than I managed! I've had some (very nice!) chewy breads recently and this one just reminded me how nice a soft loaf can be!

Lovely loaf C! Much quicker than making the rolls. Bread making should always fit round the baker I think! I think I just put a small slurp of honey in mine, bog standard Sainsbury's stuff. I have a jar of chestnut honey and it has such a strong taste I don't know what to use it for. I bet that made a super soft and bouncy bread too. Delicious!

That looks like the perfect loaf. Bet it was wonderful fresh from the oven with some butter smeared over.

Okay, I think I might just be convinced enough to try this now, having seen so many good results. Looks good as a loaf. Chorelywood method is 50 years old this year - great to know we've all been brought up on such healthy bread.

Oh yum - where's my butter and jam when I need it!