I always intend to enter No Croutons Required, the vegetarian soup/salad challenge run by Jac at Tinned Tomatoes and Lisa at Lisa's Kitchen. This month the theme is using an ingredient grown in your garden. I have to confess that really, the only thing that grows in my garden is weeds, so I'm really hoping that this soup can still be included. Aside from the weeds, the only surviving culinary plants (fruit bushes aside) are some hardy herbs. I have successfully managed to not-kill a rosemary, mint and I think even some oregano. I know that killing mint is pretty much impossible, but I'm still proud of myself. 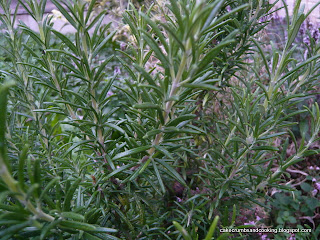 For this challenge I decided to use the rosemary, here it is in all its glory..... As autumn is approaching and chilly days and evenings are going to be upon us all too soon I have decided to embrace this change of seasons and am using butternut squash. Even though this wasn't grown in my garden, it came from my local vegetarian co-op where they source all of the produce as locally as possible, so along with the tiny red onion, my squash may have travelled further than from my back garden, but it hasn't crossed an ocean to get to me! 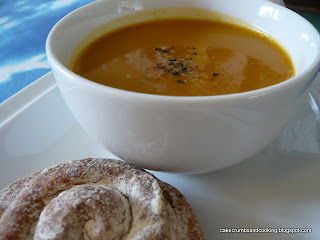 I decided to adapt an idea I saw in a relatively new purchase, Hungry? by the people who sell the Innocent smoothies, veggie pots and juices. I still haven't looked at this book properly, but one of their suggestions for soup is a butternut squash with cinnamon and a touch of dried chilli. I liked the idea of the cinnamon complementing the soup and a  little chilli to lift it. Instead of boiling up the butternut, I chose to roast it (at the same time as baking a cake!) to bring out the natural sweetness and allow the rosemary to impart its flavour to the squash. 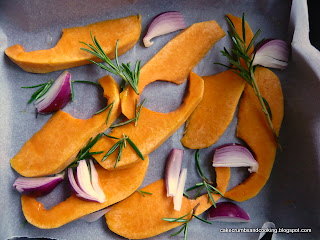 Roast Butternut Squash and Rosemary Soup with Chilli and Cinnamon
Ingredients
1/2 small butternut squash
tiny red onion
1 sprig rosemary
olive oil
about 250ml vegetable stock
pinch cinnamon (or to taste)
pinch dried chilli (or to taste)
- Roast the butternut squash with onion and rosemary tossed with olive oil until tender.
- Move to a small pan, add the stock, cinnamon, chilli and blitz to a smooth soup.
- Season with salt and black pepper to taste and reheat until piping hot.
- Serve with bread. 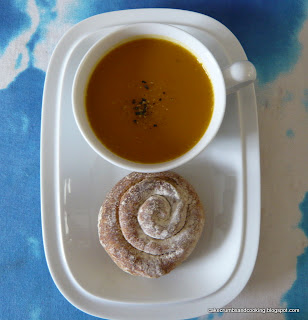 A perfect lunch for the chilly weather that lies ahead. I think some people would laugh if you knew how much (little!) chilli I had added, but I could tell it was there! The cinnamon was more of a scent than a flavour, but overall this was a lovely soup!
﻿
Posted by Caroline at 22:30

Perfect for the cold weather - I love the hint of cinnamon and chilli to compliment the rosemary and squash.

Roasting butternut is absolutely the way to go! This soups sounds divine.

Ever since I started roasting pumpkin for soup, I've never gone back to just boiling it. It really seems to intensify the flavours! Your rosemary is looking very healthy indeed, C, and I LOVE your swirly bread roll! :)

BVG - it is indeed perfect for chilly weather!

Foodycat - yes, roasting is defo the way to go for squash, much better than boiling!

Celia - yep to roasting! That's my best swirly roll from the previous post on them, yet to try again :-)

That looks lovely. I love Butternut Squash and Rosemary is my favourite herb. Lovely soup.

This soup sounds fabulous - pumpkin soup is one of my favourites. I love the taste, the texture and especially the colour.

Thank you very much for your entry. Lovely pictures and I can't wait to try cooking this up in my kitchen.

This looks delicious, and believe me I know people who are more than capable of killing mint so I wouldn't be too hard on your gardening abilities.

This soup sounds amazing ... can't wait to try it in my own kitchen :)

Choclette - thank you. It is a pretty colour isn't it!

Lisa - I look forward to trying to enter more of the challenges!

Lizpye - thanks! I'll have to try harder in my garden but at least I have a few herbs.