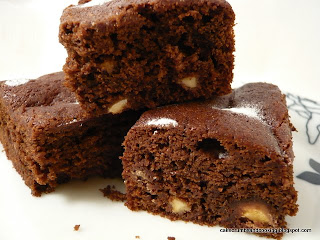 I don't make brownies very often, but when my latest issue (March 2011) of BBC Good Food arrived in the post I flicked through it as usual and these caught my eye. They are part of a fairly new series in the magazine called 'Junior Cook' - recipes made by children submitted to the magazine and these are called 'Alex's mega brownies'. I can't find the recipe online yet, but when it appears I'll try and remember to link to it, but the original recipe has got a milk chocolate and cream cheese topping too, which I didn't fancy making. 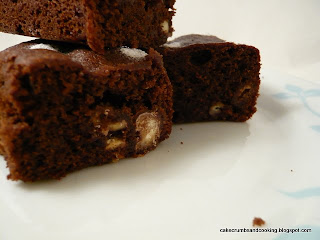 I've called them 'brownies' in inverted commas because they aren't as fudgy and gooey as most people like their brownies, but instead are a rich, fairly dense shallow cake type bake. But none the worse for that! It's just that I don't want people to get the wrong idea about how these turned out for me. I was actually quite sceptical about the recipe before I started because the instructions clearly say a 20cm square brownie tin and then the picture is a rather obviously rectangular cake. It does sometimes make me wonder whether all of the recipes are triple tested to the word, as they claim. 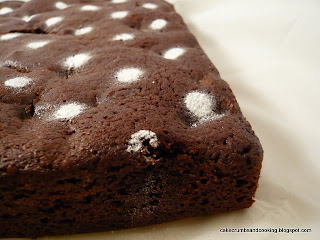 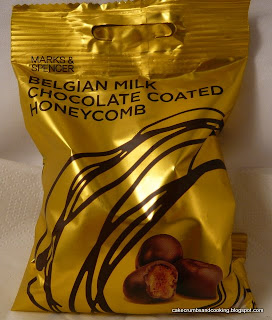 So here is the recipe with my (minor) modifications:

Method
- Preheat the oven to 180C/gas 4 and line a 20cm square brownie tin with baking parchment.
- Beat the butter and sugar together then add the eggs one by one.
- Sift in the flour, cocoa powder and baking powder then add the milk.
- Mix everything together then stir in the chocolate honeycomb.
- Spoon into the tin and level the top.
- Bake for 30 minutes (mine took 40) until the top is set, then cool completely. 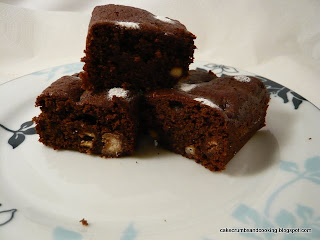 I will definitely be making these again. Although they're not the fudgy gooey sort of brownies a lot of people look for in a brownie recipe, they appealed to me greatly. They were slightly chewy and chocolatey and I really think that the addition of the chocolate coated honeycomb was inspired. I didn't really know how (or if!) it would work, but I really, really loved it. The pieces stayed together (I don't know if this was because they were coated in chocolate before they went in, because I've been wondering about making my own honeycomb and using that, but am concerned that without a protective chocolate coating it will all just dissolve into the brownie mixture during baking) and there was a delicious caramelly, honeycomb flavour that worked really well with the brownies. The textural contrast was fab too - it was delicious biting into a bit of chewy honeycomb after the softness of the brownie, and I love the way the honeycomb gets stuck in your teeth! I wouldn't bother adding the white chocolate chips again though, they didn't really add anything flavour or texture wise.
Posted by Caroline at 14:00

Oh, you wicked temptress! Chocolate covered honeycomb is one of my favourites - I'd never thought of putting it into brownies though! Did you chop the honeycomb into smaller pieces?

Hee hee! No I didn't chop it any smaller - the pieces are quite small as it is (less than 1cm cubes generally). Glad you like the look of it!

I too have been spying that recipe, it calls to me everytime I open the magazine. Good point about the size of the pan and the photo, triple tested indeed. The addition of the honeycomb sounds fantastic and I'm liking the stencils too ;0)

They look so good, C! I can see the honeycomb balls, how wonderful that they kept their shape!

Yum, I'd love to bite into your brownies and get to those little honey bits in there. I have a sweet treat linky party going on at my blog right now called "Sweets for a Saturday" and I'd like to invite you to stop by and link your brownies up. http://sweet-as-sugar-cookies.blogspot.com

Love the idea of the honeycomb in there - lovely addition.

Oh wow what a great idea! I've recently seen cupcakes and lamingtons studded with certain chocolate bars - but I should have thought of brownies!

These look great - like a cake equivalent of a crunchie.
I agree with you about the sloppy details in some recipes. My pet hate is when they tell you to put it all in one large bowl or tin when their photo is clearly of individual portions

Sounds absolutely brilliant and the moment I get to March I will bake these, no ifs or buts. My personal February is supposed to be sugar free :( Self imposed, and when I read your posts, I start to wonder why.... This could be the answer to my chocolate cake prayers. And I love the stencil idea for dealing with the brown photographs. Brilliant genius person you are!

yum yum!! want a slice right now! (and its still early in the morning). love the blog too!

I have found quite a few variations in brownie recipes, I usually make a bbc recipe, which is more in the fudgy camp, though I also make one from Tom Norrington-Davies, which seems much more like the texture you describe, still a brownie, but an alternative brownie...

I do prefer my brownies gooier than that - but as a piece of chocolate cake it looks brilliant.

I'm new to your blog and im liking it already. Those honeycomb brownies look great.

Chele - I really liked this recipe and would recommend it! Glad you like the stencils too.

Celia - I'm really pleased that the honeycomb kept it's shape - it was lovely crunching into it as you ate the brownie.

Lisa - thank you. I'll hop over to your blog later!

CC - I think they're better than crunchie because you get soft cake too! I'm with you on large tin/pictures of individual portions - makes you doubt the whole recipe doesn't it.

Joanna - you're a stronger person than me! I couldn't give up sugar at all! I hope you like these if you make them. Glad you like the stencils!

Johanna - honeycomb is now on my list of things to make. Bet it'd be great in rocky road type recipes.

Foodycat - that's exactly it. Not quite a brownie, but a great piece of chocolate cake.