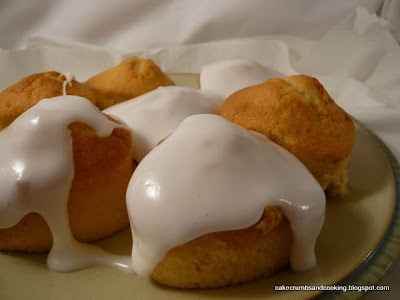 Mmm, I know, I'm late for Valentines Day. I guess you won't really be interested in making Valentines day cupcakes now, but I'm going to post them anyway because there's nothing to say that you can't surprise your loved one on a different day of the year - after all, love doesn't just happen on one day of the year. And you never know if they think you've forgotten Valentine's day and then turn up with a plate of these the reaction might be even more positive. And anyway, I'm not waiting a year to post them! 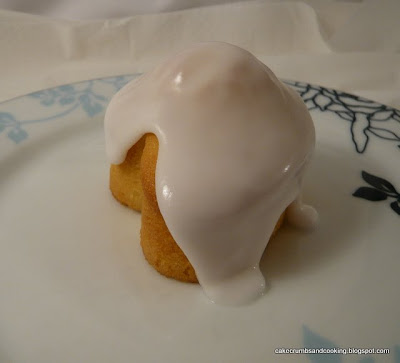 125g icing sugar for the icing

Method
- Preheat the oven to 180C/Gas 4. Line the edges of a silicone heart mould with 8 holes as best you can - I just put a strip of parchment around the vertical sides.
- Cream the butter and sugar until the mixture is light and fluffy.
- Add the egg and beat well to mix.
- Add some of the flour, beat to combine, add some milk, beat to combine and repeat until all milk and flour are added.
- Add the rosewater and mix in.
- Divide the mixture between the holes of the mould.
- Bake for 25 minutes until well risen and golden.
- Allow to cool until you can handle the mould then really gently try and release the cupcakes. I always struggle here, but just try the best I can!
Make the glace icing - mix 125g icing sugar with about 2tsp rosewater and a little extra water as required to make a thick icing. Pour/drizzle over your cooled cupcakes.
Share with your loved one (or in my case, grateful colleagues!). 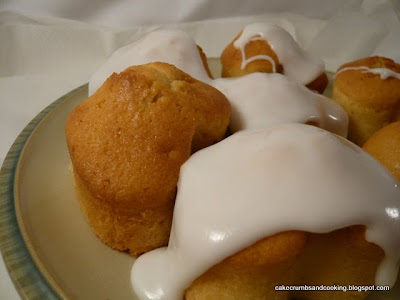 I was really pleased with the way these rose and peaked - bursting hearts of love (hmm....!). The recipe is adapted from the Primrose Bakery recipe book and I like using this proportion of ingredients - the egg doesn't tend to curdle when it's added (I usually manage to curdle most of my cake mixtures) and the mixture of plain and self raising flour gives a substantial cupcake.

The rose flavour is fairly subtle, especially in the cake, and builds as you keep eating. 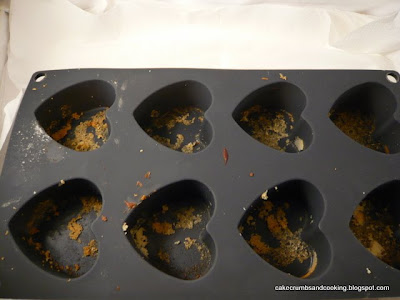 As an aside - does anyone else have trouble with silicone moulds? I thought the point of them was that they were non-stick. As you can see, mine really aren't. I would have really struggled to release the cupcakes if I hadn't put a piece of parchment around the edges. As it was I lost a fair amount of the base of some of the cakes, and they really did stick. This mould has been used a few times - so neither new nor old. Any ideas?
Posted by Caroline at 10:15

Agreed valentine cakes should not just be for 14 Feb. Love and cute heart cakes can be enjoyed all year round

Use Cake Release. You can buy it from Lakeland http://www.lakeland.co.uk/F/product/4198?src=gfeed Its great for all fiddly shaped tins and not just silicone ones

These look delicious no matter the time of the year! You're right, it's nice to surprise our loved ones any time. The icing looks really effective

You could bake these any time of the year and the thought would be the same! They look so scrumptious.

My silicon cake moulds are little bastards - only cakes with a lot of oil in them come out ok.

Johanna - glad I'm not the only one with the sticking cake problem, I think you're right, much depends on the recipe.

Jo - I think I've considered using that type of product before and although I know you don't use much the ingredients list put me off, from what I can remember.

Foodycat - yep, that's pretty much how I feel about my silicon cake moulds. And they're a pain to wash and dry properly too.