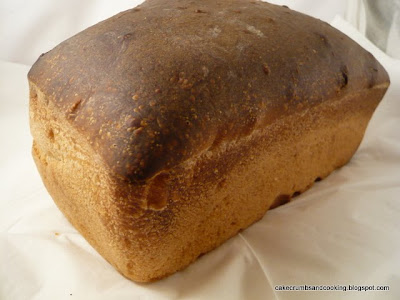 Joanna and Celia are my sourdough gurus. I can only aspire to produce the kind of loaves they seem to turn out effortlessly. However, I'm sure that there must have been bumps along the road, and I can't expect to achieve the perfection I'm seeking first time round. Yep, that's me making excuses for what is to follow!

I only really started baking my own bread a couple of years ago and I'm now quite proud of the yeasted loaves that I can make. There are certainly more successes than failures now. Progress is necessarily slow - there is only me eating the bread I make, and even though I have it for morning and lunch that only equates to about 1 1/2 loaves a week - so it takes a while to eat my mistakes. Unless of course I decide to start feeding the local bird life with the less successful attempts. I haven't resorted to this yet, but I might still.... when the freezer bursts! 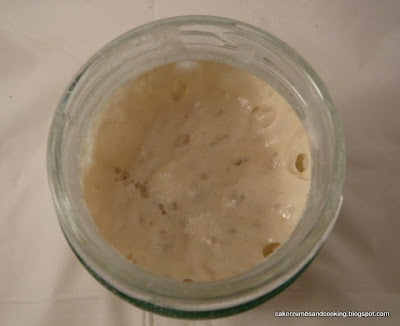 Before feeding
I started a sourdough culture a while ago and have been carefully nurturing it (actually, that's not entirely true - of late I've been rather less careful with it, only feeding every couple of days rather than every day religiously) with some lovely flour and bottled water. In fact, my starter might dine (in relative terms) better than I on occasion. 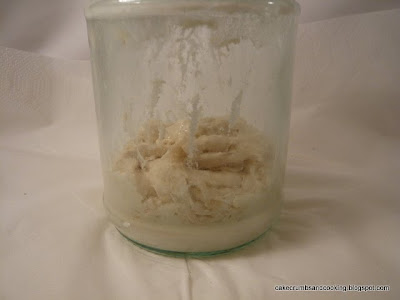 I've made a couple of loaves with this starter, more in upcoming posts, but this is one that is perhaps the least visually attractive. After reading Celia's post on the basic proportions that she uses for her sourdough I decided that I would give it a try. As a sourdough novice I decided that although large holes in my bread are desirable, being able to handle the dough is rather more desirable at this stage. After all, if I can't handle it, I can't get it into the oven either can I!

So following Celia's proportions for a 60% hydration loaf I used the following:

150g starter (75g water, 75g strong white flour, 25g mature starter left overnight to do it's thing)
500g strong white flour
215g bottled water (plus I added a bit extra as the dough seemed too dry - perhaps I should have stuck with it... see later)
20g olive oil
12g salt (should have been a little less but my hand slipped!) 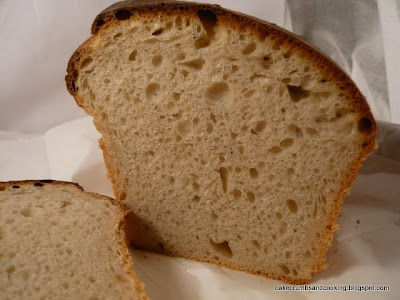 I mixed the water into the starter until there were no obvious lumps left, and then added the flour, olive oil and salt and mixed well (in my KitchenAid stand mixer) to form a dough. It seemed a little too dry so I added more water and continued to mix for a bit. I then transfered it to a pyrex bowl and left it for probably most of the day. Six hours perhaps. My house isn't all that hot, so in order to cosset the dough, I made up a warm hot water bottle and wrapped it in a (spare, unused!) duvet to keep warm. I'm glad I did because I don't think it would have done anything at all otherwise! Growth seemed to be minimal, but I started thinking that I would run out of time, so pressed on. The dough seemed soft and I didn't think it'd be able to hold it's own weight after shaping, so I dumped it rather unceremoniously after minimal kneading into a 2lb/900g loaf tin. It rose, slowly. It never reached the top of the tin, so after a little muttering about unresponsive yeast I decided to cut my losses and bake it.

Gas 7 for about ten minutes, with steam, then reduced to gas 6 for about another 35-45 minutes (I didn't make a note of this, I wasn't holding out much hope for this loaf) until the base sounded hollow. Cooled on a wire rack.

As I say, I wasn't really expecting much from this loaf, in fact, I thought it would be a suitable candidate for helping to build a house. Just goes to show how little I know! The texture is fairly tight and firm, with small, but fairly evenly distributed bubbles. (Limited) success! From what Celia said about this formula, small bubbles are to be expected, so I think my starter succeeded! Because the loaf never rose above the edge of the tin, I didn't think to flour it or slash it before baking, and to me, it looks like my loaf is sticking it's tongue out at me in return for the lack of care and attention! 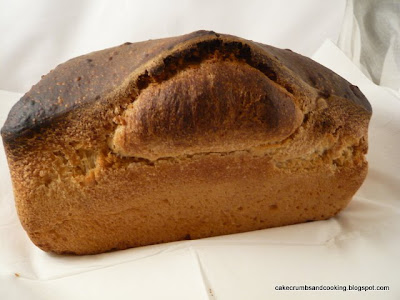 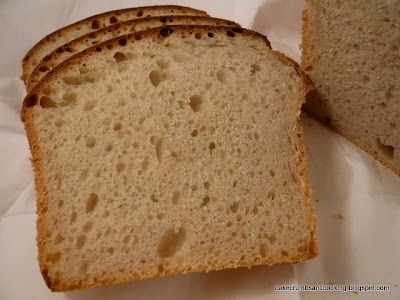 Anyway, thank you Celia, I'm enjoying this loaf for my sandwiches, and small holes are perfect for that purpose - I don't want all my filling dropping into my lap as I eat! Who knows where my next sourdough adventure will take me!

C, thank you so much for trying this out! I think your loaf looks fantastic, and a really good example of a lower hydration loaf. I love the crumb! This is exactly the sort of crumb my Pete loves most - slightly chewy and elastic. I find my loaves exactly as you describe them - crumb a bit firmer than yeasted, and not overly sour in flavour unless I've left the dough to rise overnight. They also have a very distinct aroma, which wafts through the whole kitchen once the loaves come out of the oven!

C, I can't believe how well you've done given that you've never made or even eaten sourdough before. You've made my day! :)

That is a fantastic loaf you've made there following Celia's method! Thanks for the mention too. Beautiful consistent aeration through the crumb shows you have allowed it to prove fully and your description of the aroma and texture sounds spot on. The tin will constrain the size of the bubbles as the dough can only rise upwards, a free standing loaf expands sideways as well while proving and baking, so the crumb is characteristic of a tin baked bread. If you do want a softer sourdough crumb, try making a dough using some dairy, milk, yoghurt, whey, buttermilk, butter in the mix. Or if you don't eat dairy then you could try a little cooked potato or some cornflour in the mix and this will change the texture and make the crumb softer. But sourdough tends to have a dryer mouthfeel, you will find it keeps longer too. If you have too much bread, you can always turn it into croutons, panzanella, breadcrumbs and so on. I bake my croutons and put them in a tub and they keep for several weeks. Far too long a comment... Have a good week!

Well it looks a mighty fine loaf to me! I am hanging my head in shame as I made my starter (the 4th attempt may I add!) last month and it is sitting in the back of the fridge now, unused!! Must take a leaf from your book.

Celia - thanks for posting your basic recipes. I'm pretty pleased that it turned out this well given that I was ready to give up hope halfway through the process! You're right about the aroma of the baking bread filling the house - delicious!

Joanna - your comments are never too long! Glad to hear that I managed to proove the loaf properly, it was pretty much guesswork and luck I suppose. Interesting ways of making the crumb softer, I will definitely bear that in mind the next time I make a loaf, I honestly hadn't considered putting dairy into a sourdough loaf, but will try it at some point and compare.

Chele - thank you! Give it a go, but only when you've got a while to potter around the house. At the moment my life is working round the sourdough rather than the other way round when I'm making a loaf. It'll change eventually though!

I think you should be proud of yourself - your loaf looks wonderful. In my experience, sourdough never rises as much as yeasted dough, so I don't think that's anything to worry about. Good luck with your continuing sourdough adventures.

would love you to enter my amazing giveaway for a free meal at IDA restaurant: