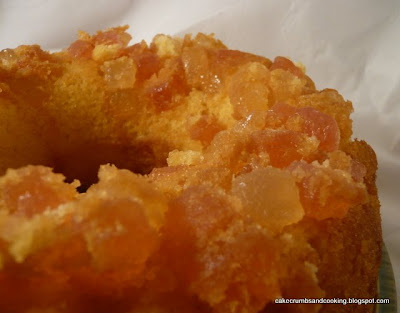 I've had rose flavours on the brain recently. That's what happens when I dig in cupboards and unearth different bottles - they get left out on the side and every time I see them I wonder how else I can use them. Such was the way with the rosewater bottle. However, it didn't actually make it into this cake, rather provided the inspiration. The other factors were a surfeit of eggs that I needed to use, plus a box of (whisper it, Christmas) Turkish delight that I stumbled across when doing a little light tidying. Well, it wasn't even tidying really, I was just moving things around. Tidying implies that the place looks, well, tidier after you've finished. Mine doesn't - things have just moved round a bit. Anyway, back to the Turkish delight. The box I found was rose and lemon flavoured (they usually are round here...) and having made rose flavoured things recently, I opted to enhance the lemon flavours this time round. Plus I had lemons in the fridge already!


This was a midweek bake, so I chose my bundt tin because I always think that bundt tins give cakes that look good whether you decorate them beautifully or not, and I knew I wouldn't have much time to decorate my cake. I think this was a mistake given the advantage of 20/20 hindsight....


I decided to chop my Turkish delight into little pieces (each of the original pieces was snipped into 8 and dusted with more icing sugar to prevent it all clumping together in the cake) and mix it through the cake batter. I was slightly concerned (rightly so...) that the heavy Turkish delight pieces would sink a little, so spread some of the batter into the greased tin before mixing the Turkish delight through the rest of the batter and spreading that on. Hmm, well that idea failed spectacularly. All of the TD sank like a bomb to the bottom of the tin and stuck there. Like superglue, or perhaps those annoying kind of labels that just won't come off your book/plate/shoe or something else very sticky. Once cooked and cooled the cake eventually (with much levering and prising out) came out of the tin with a crater like top, devoid of any TD. However, I scraped all the Turkish delight off the tin and pressed it back on though - I will be triumphant! 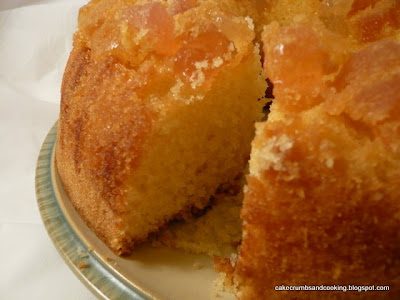 I won't give the exact method for this because I can't imagine that I want to do this again, but the cake was good so I'm going to note down the amounts I used, for future reference.


Method
- Preheat oven to gas 4/180C. Grease your bundt tin.
- Cream the butter and sugar until light and fluffy.
- Add the eggs, flour and lemon zest and beat again until well combined.
- Fold in the TD and spoon into the baking tin. Bake for 35-40 minutes until risen and golden.
- Remove and allow to cool until you can handle the tin.
- Remove from tin. This is where it all goes wrong, and where this method will stop..... 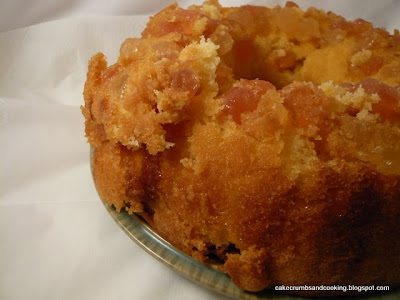 You can see the damage in the photo above - the cake really had well and truly stuck in some places and it was heartrending to see it ripped when it finally dropped out of the tin. However, I was sure it would taste good and not wanting to waste an entire cake I took it into work anyway. Was the taste a disaster? Nope! Actually quite a successful cake. The cake was moist, light and lemony and the turkish delight on the top provided a nice contrasting chewy texture. I think that had I not admitted to people that this had almost been a complete disaster they wouldn't have known or said anything! Needless to say, it was all eaten.
Posted by Caroline at 22:00

What a pity it didn;t work out as you would have liked. SOunds like such a great idea too!

A gold star for inventiveness, never would of thought to add turkish delight to a cake!

I've learnt not to tell people if a recipe has 'failed', just smile sweetly and pretend that's how it should be ;-)

Anne - I'm going to adopt a more upbeat approach from now on. Nothing is a disaster, it was all supposed to be like that ;-)