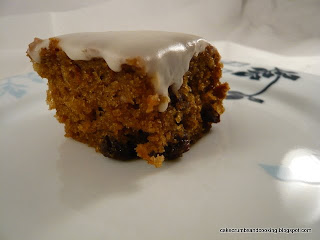 A good moist lightly spicy carrot cake seems just the thing to make to brighten up a dull winter's afternoon. I have made Delia Smith's Low fat carrot cake before, here, and this one is acually very similar, just using slightly different proportions.

I made it a while ago, and from memory I followed the recipe (which can be found here) pretty closely. I recall substituting mixed spice for the cinnamon - I feel that cinnamon is sometimes overused - it has its place, but mixed spice gives a more complex flavour that I enjoy more in this type of cake. And looking at my photographs I'm not sure that I made it in a 7" square tin, I might have used an 8" square and reduced the cooking time a bit - my cake looks much flatter than the one pictured. I don't think you need as much icing sugar as listed if you only want to make a drizzle type topping - mine covered the cake easily, which didn't really matter - I suppose I could have made it thicker if I'd only wanted a drizzle effect. 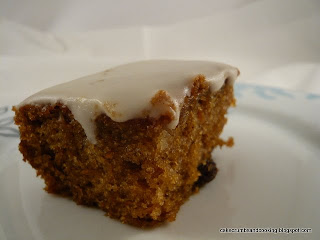 I really enjoyed this one - I can almost kid myself that it's healthy with oil rather than butter and all that veg.... Anyway, colleagues enjoyed it and one of them remarked on the use of mixed spice rather than cinnamon, which pleased me greatly! I think that on balance I prefer this cake to Delia's version. Although Delia's is lovely, a couple of times I've made it, it has been bordering on wet rather than just moist, which I found unpleasant. This one is lighter but still moist whilst still containing plenty of carrot and raisins. Yum, perfect with a cup of coffee.

I like the idea of an orange icing, makes a change from the same old cream cheese one. Looks fab ... and low fat too!

I only have to see the words 'carrot cake' and I'm sold. Looks delicious and I love how its boardering on healthy

This is my favourite carrot cake too!

Did you see Dan Lepard's baking recipe this week? It uses grated sweet potato, glacé ginger and hemp flour. I'm very tempted, although I'm not sure I'll ever find the hemp flour!

Can't go wrong with carrot cake- it's always so lovely! Like the look of your icing, particularly how it's just oozing down the side of the cake

The bbc cake is the only carrot cake I make now, is a firm family favourite! My mum adores it too and and made me one last week, have a slice left to go with my cuppa this afternoon yey :)

I will definitely try though with mixed spice, instead of the cinnamon. Just to test of course you know ;-) And carrots are very good for you...

I Love reading your blog and I have awarded you a stylish Blogger award check it out at www.cupcakesmile.blogspot.com

Chele - The orange icing is a nice change from cream cheese, and yes, I reckon this recipe is fairly low fat.

Katie - thank you. I wonder if this would work well as gluten free because it's pretty moist anyway?

Suelle - it's a really good recipe isn't it! I was massively tempted by Dan's recipe - I've even got the sweet potatoes to use. Not sure I'd find hemp flour either. Wonder if it could be substituted?

CC - thanks! To get icing like that - be impatient and don't wait for it to set enough before cutting ;-)

Anne - this cake positively must be good for you! Hope you enjoyed your piece of cake and that you like the mixed spice variation if you try it!

Cupcakegirl - thank you, I'll pop over in a bit!