When Sarah announced that this month's Forever Nigella theme was Chocolate I was so pleased - I may well not use my (many) Nigella books nearly as much as I should, but chocolate recipes are the one thing that I do make from them! So why am I so last minute posting this one? I wanted to challenge myself and make a chocolate recipe that I haven't made before from one of my books, but in the end time and good intentions ran away from me, and I ended up making one of my old favourites. Not that the recipe is any the less for it being one of my favourites. 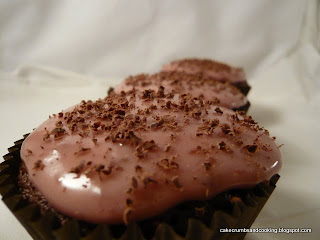 I made Nigella's Chocolate Cherry Cupcakes, but put my own slight spin on them. I remember clearly the first time I made them - my parents were hosting a little party/gathering for a number of neighbours and I made these cupcakes, using cherry jam and decorating them with melted chocolate and a piece of Cadbury's chocolate flake. This must be almost 15 years ago now. All the children at the party took a cupcake, ripped off and consumed the flake, picked the melted (and now set) chocolate off the top and abandoned the cake. Either as crumbs squelched into the carpet or behind a half drunk glass of juice, or in a pot plant. You get the picture. My teenaged self was so disappointed - these were special cupcakes, they weren't just bog standard sponge cake mix, and I really wanted them to be appreciated. I have now learnt that you must pick your audience if you want appreciation. It is not worth making a special effort for, or expecting feedback from children. By all means make something delicious, but make it easy and don't be upset if your efforts are all in vain! 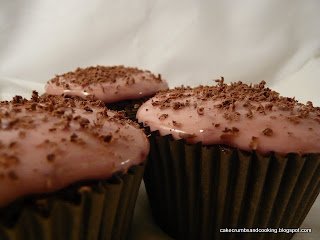 Moving on a number of years and with the deadline for this challenge looming these cupcakes popped happily into my head. The recipe is given on Nigella's site, here and they really are an absolute doddle to throw together, yet taste special enough to be worthy of a special occasion. I followed the recipe as stated, apart from using raspberry conserve rather than cherry, and using only 250g rather than 300g - I wanted to save some for the icing I had in mind. Mine took a couple of minutes extra to be cooked. Instead of the ganache icing specified I decided to make a jam/icing sugar mixture. To frost 12 cupcakes generously, you'll need 75g jam and 150g icing sugar, plus a little water to slacken the mixture. I think I must have been subliminally influenced by the challenge badge for this one, my icing is a rather delicious shade of pink!
Decorate with chocolate shavings, or not as you prefer. These are lovely - the recipe is a winner and never fails me. I'll have to update with taste comments, but need to submit this now! 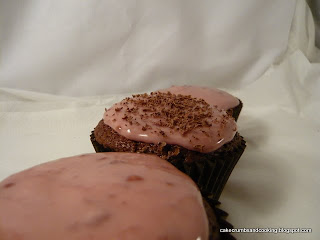 I do love her cakes with jam in them - I have made the store cupboard orange cake with strawberry jam and it's wonderful. I like your chocolate shavings very much, they look so delicate on that gooey icing. Yum!

Thanks for joining in with Forever Nigella!

By the way, I've had a similar experience serving cupcakes to children... I made some gorgeous gingerbread cupcakes topped with ginger icing and gingergread cookies shaped like angels at Christmas. My husband said, you might as well have just thrown smarties on a box of cake mix.... But I enjoyed making them!

I can imagine that kiddies wouldn't appreciate these cupcakes - their loss!!!! (All the more for us :-}})

Kids are strange! I generally make bland cakes for kids because they just don't get it - but I would enjoy your cupcakes - never tried the recipe but it always looks good in the book

These look lovely - the topping is so glossy!

pah! children. who needs them!?!?... little animals... no idea of the aesthetic or finer things in life...

Lovely-looking cupcakes these and hope you found a more appreciative audience this time around!

I feel for your 15 year old self - gutted is what I would have been. These look quite elegant in the dark cupcake cases. I've only made these once before, but remember them being rather good.

Within the Kitchen said...