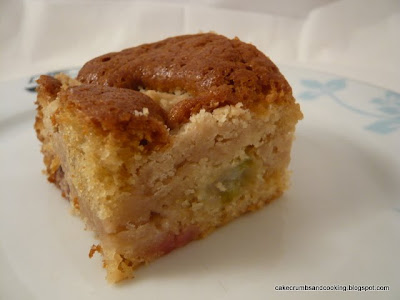 This one was inspired by a recipe for rhubarb crumble cake in the March 2011 issue of Delicious magazine. I don't make nearly enough recipes from the magazines that I subscribe to, so it was nice to feel that this is being rectified. Rhubarb is apparently in season at the moment. I know this should be the case and I keep seeing it at the supermarket but I haven't bothered to look where it is coming from - whether it is imported or home grown. Hopefully homegrown, but possibly not.

Supermarket rhubarb quite often seems a little on the soft side, so I went to my local wholefood co-operative in the hope that they would have some nice rhubarb for me. When I couldn't see any I asked about it, and was informed that it's not quite in season yet. Ah. I really thought forced rhubarb would be here now, but obviously not. I'll have to be patient.

In the meantime however, I made this cake using some of the stash of lovely, juicy tart gooseberries in my freezer. I thought gooseberries would be a pretty good substitute for rhubarb - both are tart and need added sugar to make them palatable. Although having said that, the gooseberries I used were a mixture that consisted predominantly of red dessert gooseberries, which are much sweeter than the green varieties. 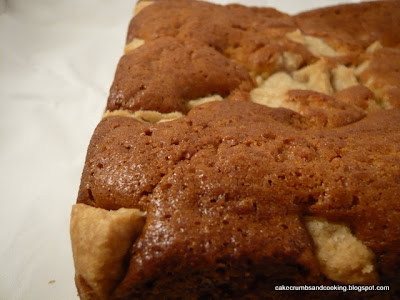 Melt the butter over a low heat, remove then add the sugars, stirring until they seem to have dissolved, making a toffee like sauce. Stir in the flour to make a stiff biscuit-like dough, spread into a small mixing bowl and leave to go cold.
The fruit is tossed in a mixture of flour and sugar, which sadly didn't prevent it dropping to the bottom of my cake. Hey ho!

The sponge part of the cake is a soured cream cake and has a proportion of ground almonds or hazelnuts, which I substituted for more plain flour.
The recipe instructs you to spread the cake mixture into the tin (20cm square) then top with the fruit. You then have to break up the crumble topping into chunks and scatter this over. It was certainly an interesting technique to try!

The recipe states that it makes 9 squares, but I got 16 reasonable coffee time size pieces out of mine. Nine would probably make an excellent pudding with custard.... mmmm, custard. 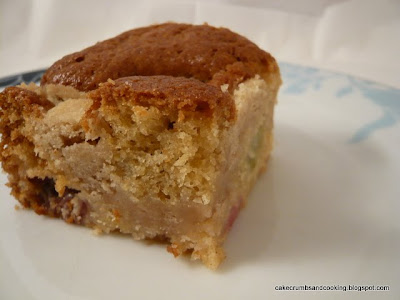 Sadly this was not my most popular of cakes - I forget that just because I love gooseberries other people tend to be put off by the thought of them. I'm not sure why this is - perhaps people just don't see them often enough? Do you like gooseberries? Do let me know in the comments! But those who were put off missed out! This was a tasty cake - the main body of the cake was nicely sweet and soft, contrasting with the moist pockets of gooseberry (which had predominantly sunk to the bottom of the cake) and the chewy chunks of crumble.
I can't quite decide whether I liked the crumble part or not. It was certainly a different way of making a crumble for a cake, and perhaps my pieces were too big but most of them sank during the baking of the cake, whereas those in the photo that inspired me had mostly remained on the top of the cake. It's annoying when that happens isn't it! The rhubarb also seems to have stayed afloat better than my gooseberries, but it's hard to know whether this is down to me using different fruit, or my cake turning out differently from the one pictured on the cover of the magazine. I think on the whole I wouldn't do the crumble like this again, I already have a crumble the works well for cakes, so I think I'll stick to that in the future.
Posted by Caroline at 18:00

I don't think I've ever tasted gooseberries. This cakes looks delicious though! I'd love to try it.

What a fantastic idea C. Looks lovely. I'm finding rhubarb quite hard to come by even though it is in season. There is only one supermarket chain that seems to be selling it and it is quite a trek from where I live so its only a special treat for us. Great idea to swap the fruit around.

I suppose I'm lucky having Borough Mkt so close by, but I've seen lots of forced rhubarb for several weeks now. I bought some this week for jelly making.
I think that gooseberries would work just as well, as they have that tartness working for them! Cake looks lovely.

Chele - I think I'll have to buy supermarket rhubarb, but was hoping to get some local stuff!

CC - I'd love to live near Borough Market, but my bank balance wouldn't! I think the gooseberries were quite a successful substitute!

This looks delicious. I love the sharp tanginess of goosberries. Shame not more places stock them. I usually only find them at pick your own places. Looks a divine pudding cake. I'll have mine with custard!

Oooh, this looks yummy. I've never tried gooseberries but I love rhubarb so I really should try them. I always find rhubarb difficult to find - at least when I need it, if it's not on my list I usually see piles of it! I'm with Katie - I'd have this with lashings of custard, mmmm!

Katie - thank you! I always stock up on gooseberries during their short season - they freeze well.

Kim - give gooseberries a try - a gooseberry fool is a good way to start!