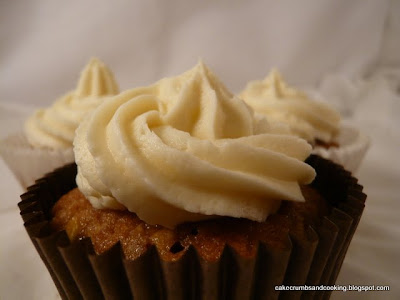 T was lucky enough to visit Canada recently. Canada is on my list of 'all time top places to visit just as soon as I can afford it....'. I'm not sure how near to the top of this list it is, but pretty close. Although I've never visited my mental picture of Canada is an absolutely stunning country - beautiful green, lush scenery, fantastic rocky mountains covered with snow and shimmering in the sunlight, vast plains stretching for miles... as far as the eye can see. I'd love to visit the bustling cities and experience the cultural side of the country as well as the scenic, outdoorsy side (although I'd absolutely love to ski in Canada - I've never skiied before in my life, well, not on real, proper snow - that brief flirtation in Scotland at the turn of the Millenium on melting slush doesn't count...). Where is all this picture painting leading, you wonder? Having established that I've never been to Canada and know little of it, the thing that I do associate most strongly with the country (aside from polar bears and grizzly bears) is maple syrup. 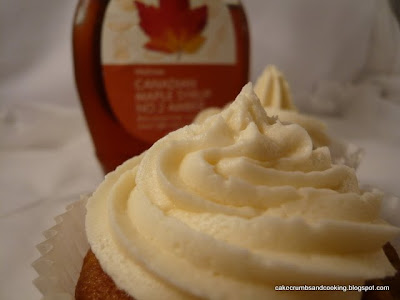 Rather embarrasingly, I'd not tried maple syrup until recently, so I didn't even know if I liked it when I asked T to bring me some back from his jaunt abroad. Don't misunderstand me, I had a strong suspicion that I would like it.... and I'm right! Yum, delicious. The sweet, smoky flavour really appeals to me, which is great because T brought back a rather large container of maple syrup for me, just as requested. He's a star! (N.B. The bottle pictured here came from Canada via Waitrose, rather than via T, but I already had it and thought I'd better use it first!) 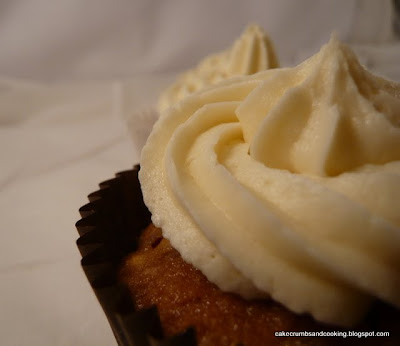 To start my adventures with maple syrup I decided to make something with a definite flavour of the syrup, but without using too much of the precious liquid. After flicking through various baking books (oh how I love doing this!) I settled on a recipe for Maple, Pecan and Apple cakes with Maple Frosting. The recipe is one from the Australian Women's Weekly baking books, and can be found here. I followed the recipe as stated apart from substituting 40g dried cranberries for the pecans. I chopped the cranberries finely with scissors, which helped them to stay suspended in the cake mixture. I opted not to make the caramel shards but simply to pipe the buttercream in an elegant swirl. 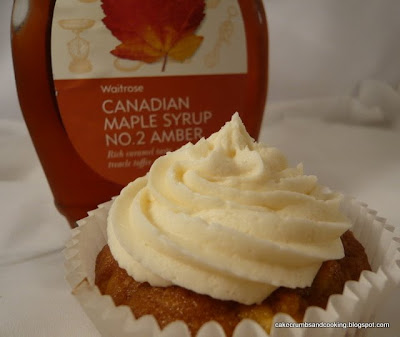 The recipe worked really well, and although a little on the small side, these were delicious. The apple made the cupcakes moist and the cranberries stayed suspended in the mixture, adding chewiness and texture (although in honesty I think that they would have been better with the crunch of the originally specified pecan nuts - somehow the chewiness of the cranberries wasn't quite right) which was pleasing. I used light muscovado sugar, which in combination with the maple syrup, lent a lovely musky, smoky flavour to the cupcakes and a darker crumb. This was complemented perfectly by the sweet buttercream which had just a hint of smokiness from the maple syrup in it - you could definitely taste it, but it wasn't overwhelming.

I'm looking forward to using maple syrup more in my baking and cooking - have you got any favourite recipes to recommend? 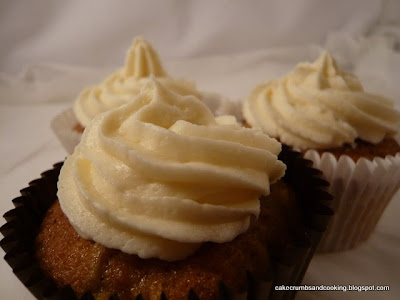 They look fab and I can imagine they taste great with the slightly tart cranberries.

I made a parsnip cake back in January that used maple syrup in the cake and frosting - yummy. I suppose anything maple and pecan is a classic

Cupcakes look gorgeous - lovely flavour combination which I simply must try! Loved your blog too!

wowza's the flavours in these cupcakes sound deeeelish! Maple and apple in particular! They look moist and yummy too with cute icing top.

Those cupcakes look so moist and the flavors are making my mouth water...

Hi! Just came across your blog. I love how cupcakes are taking on a healthier ingredient listing...i.e. fruits, etc. Beautiful blog and photos! I shall add it to my favourites and visit again!!
Greetings from Canada!

C, these sound so good and they look lovely too. I'm impressed with your piping swirls. I love the flavour of maple syrup. I've used it in cakes before, but find it works really well in coconut macaroons instead of using sugar. Also combines well with chocolate to make a ganache for icing cakes with.

I have maple syrup on porridge in the winter and add it to marinades. Don't use it much for baking, you could add it to a bread, like a tea bread maybe instead of golden syrup or agave. Dan's teacakes that sort of thing? I love its smoky delicate runniness!

So pretty! I love maple syrup, but I mainly use it on French toast or pancakes, rather than as an ingredient. It's good subbed for sugar in stewed apples too.

Thank you thank you! I seem to be awash in maple syrup at the moment, so I've been looking for recipes! This one looks fabulous, and I'm looking forward to see what else you come up with! :)

Katie - I like the sound of parsnip cake, especially with maple syrup too. Mmm!

Lesley - thank you, I'm always glad to hear when people enjoy the blog!

PL - thank you for the Canadian greetings! Glad you'll be visiting again!

Choclette - thanks! I must look for a chocolate maple syrup icing, that sounds amazing!

Joanna - thanks! I hadn't thought of adding it to bread, but I'll certainly bear it in mind now.

Foodycat - thank you. I love the idea of stewed apples and maple syrup - sounds delicious!

Celia - these were good, but I don't think they'll help with a sea of syrup!