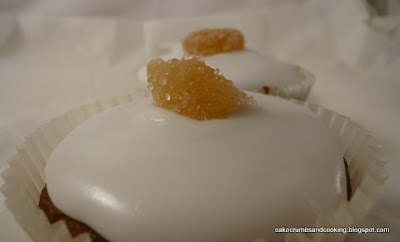 I was very taken with Dan Lepard's recently published Hemp and Ginger Cake, but don't have a ready source of hemp flour nearby. And since this is the only recipe I've ever seen that called for hemp flour, I decided that although it is clearly a defining ingredient in this recipe, it was going to have to go (well, what am I going to do with the rest of the bag of hemp flour once I've done these???). Sorry Dan. But thank you for the inspiration and the rest of the recipe, which is a winner!

In the absence of two 18cm (7") round cake tins, I decided to bake these as cupcakes, but guessing that the full amount of batter would give me too much for 12 cupcakes, I decided to make 2/3 of the recipe instead. This worked well, and I got 11 tasty cupcakes out of it. 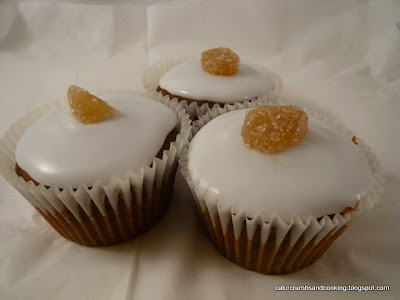 The original recipe can be found here, on the Guardian website should you wish to see it. I'll give my amounts but the method I followed was Dan's.

For the icing
125g icing sugar, plus water to mix

I baked them for 25 minutes at 180C/Gas 4. When cool, mix the icing sugar with enough water to form a stiff icing then spoon onto the cupcakes. Decorate with the extra crystallised stem ginger. 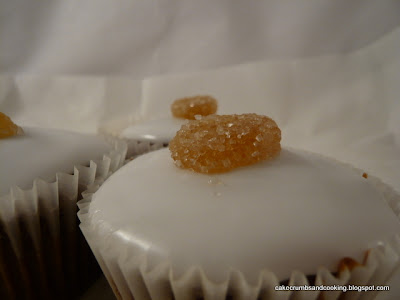 What did I learn? That grating sweet potato finely is hard work and potentially dangerous for the fingers. I'm not sure whether I'm glad that my grater is pretty blunt (given the number of times my fingers slipped with no ill effects!) or sorry that it isn't sharper, so that I could have got the job done more easily!

These are definitely ginger cupcakes for ginger lovers. I chopped the crystallised stem ginger fairly small, but the chunks were very much in evidence, and they were big enough to have to chew on, releasing all that ginger flavour and heat that I love! The cool icing was a really nice contrast to the heat of the ginger and I'm sure that had I been eating these straightaway, the suggested cream cheese cinnamon frosting would have lifted them again. A nice complex flavour to back up the ginger came from the treacle and dark muscovado sugar and these were moist soft cupcakes. Colleagues were very complimentary about these cupcakes, especially the ginger lovers! Thanks for a great recipe Dan, and sorry to have adapted it so heavily!
Posted by Caroline at 23:25

Interesting combo of ingredients, pretty sure I owuld never have thought of combining them. Looks great.

As a ginger fanatic these are right up my street. I think your thick white icing beats cream cheese frosting any day!

sound lovely! Am sure dan would love to know he is inspiring such great cupcakes - will be bookmarking these

I too was intregied by this cake. I think your adapted versions look delicious.

Those are the most interesting cupcakes I have seen recently, great flavours!

Chele - neither would I, that's why I like Dan's recipes!

CC - I thought of you as I posted these - the chunks of crystallised stem ginger make them fairly fiery!

Katie - I love the way Dan introduces you to new ingredients. All of his recipes sound interesting in some way!

Nicisme - thank you! I bet the flavour would be even better if you could source the hemp flour too!