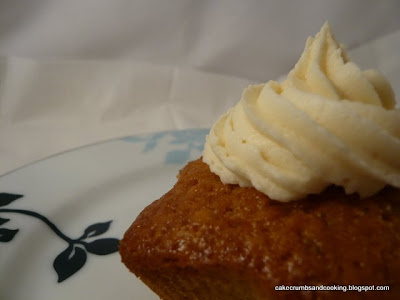 I'm rotating out of my current department, having thoroughly enjoyed the past eight or so months that I've spent there. My colleagues are really lovely, and have been an absolute joy to work with - sometimes that's the most important thing about a job I find. I can enjoy my work, but if I don't get on with the people I'm working with then I can still struggle to find the motivation to work hard.

My colleagues have been the recipients of quite a lot of the baking you see on this blog, and it seems that they've enjoyed it greatly! I've had some really lovely comments from various people, and at times, it's really made my day when someone has said something good. Anyway, because I'm rotating out of the department (but not permanently!) they very generously bought me some leaving/appreciation presents before I went. One of the things I was given were some silicon star shaped cupcake cases. I've had mixed success with silicon moulds before (see here for a bit of a disaster) but I had high hopes for these - the star shape was good and open and the silicon light and flexible and luckily they worked really well! 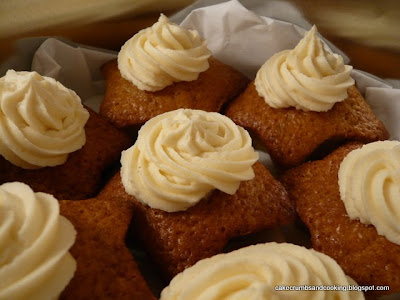 All packaged up and ready to transport into work.

I had yogurt in the fridge to be used, and limes that were threatening to take over the world (I've never seen such huge limes in my life before - they're the size of small lemons, I'm so impressed!) so I decided to make Nigella Lawson's Baby Bundts. I've always passed over these before, simply because I don't have the correct moulds to make them in, but this time I decided to adapt and use my new silicon baking cases. After all, a 2 egg mixture usually makes about 12 cupcakes doesn't it, so it was worth a try! 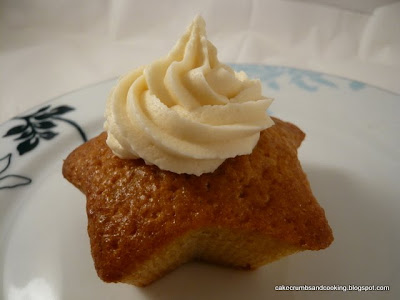 These have the added advantage of being a muffin mix - no creaming of butter and sugar is required, which makes them quick and simple to get into the oven and henceforth into waiting mouths....

The recipe comes from Nigella Lawson's How to be a Domestic Goddess, surely my most used of her cookery books, and constantly inspiring.
Lime yogurt star cakes
Ingredients
125ml natural yogurt
75g butter, melted
2 eggs
zest of 1 enormous (or 2 more standard) limes
150g plain flour
1/2 tsp bicarbonate of soda
125g caster sugar
Method
- Preheat the oven to 170C/Gas 3. Prepare your tins as necessary. I didn't do anything to mine at all!
- Mix together the yogurt, butter, eggs and lime zest.
- Put the flour, bicarb and sugar into a large bowl.
- Pour wet ingredients onto dry, mix well to combine and spoon into your waiting moulds.
- Bake for 20-25 minutes until lightly golden brown.
- Allow to cool a little, until you can handle them, but not too long - Nigella says if they're too cold they'll stick. Mine turned out fine, happily!
Prepare your topping. Nigella's cakes are iced with a lemon glace icing (icing sugar plus lemon juice) but I decided to go for a more decadent buttercream frosting. 75g butter and about 150g icing sugar gave me enough to decorate the twelve cakes I made. 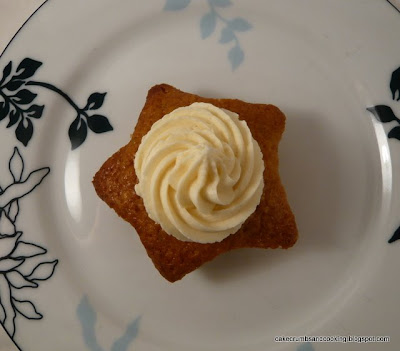 The cakes were moist and quite lime flavoured - not in-your-face lime-y but a bit more subtle. The vanilla buttercream was a nice complement to the cake, adding richness to a fairly plain base. This recipe isn't the sweetest of cakes, which makes it nice to have a sweeter frosting. I can't say that this will be my go-to recipe for cupcakes though, but it's good to try new recipes and ring the changes a bit.

I was really pleased with how these silicon moulds worked though, I guess it's just a bit pot-luck whether your moulds stick or don't. Many thanks to my lovely, generous colleagues for their gifts. It's been a pleasure baking for them!
Posted by Caroline at 22:25

I have never tasted a lime cake but I can imagine that if the recipe is by Nigella that it would be great! Your piping is very pretty; particularly in the last picture. Your co-workers are very lucky. I'm so glad you all get along.

How lovely of your team to give you a gift like this. Love the shape of the cakes and the flavour combo too, lime is my latest new craze!

Aww I love the star shapes!

I've had silicon issues too, have some heart shaped ones but never seem to get the cake out fully :(

They're so pretty! I've had mixed success with baking in silicon as well, so I'm encouraged by how gorgeous your star cakes look! And I'm glad your workmates bought you a gift - you deserve it, and I'm sure they're going to miss all your wonderful treats while you're in other departments!

These look like a nice change to your average cupcakes! and a healthier option!

Chele - thank you, and I'm very lucky to have such generous colleagues!

Anne - thanks. Silicon does seem a bit hit and miss doesn't it!

Johanna - silicon is great when it works, these came out really easily.

Celia - thank you very much!

Mia - yes, it was nice to try something different.

These cakes look so gorgeous and I'm glad the moulds worked well for you. Silicone is pretty much all I use for baking - they are just so easy. No wonder your work colleagues will miss your baking. Hope you get on well in the next department. Good Luck.

What a fab present! I've been feeling a bit cupcaked-d out lately but I think a starry mould would be just the trick to tempt me back, might have to go on my birthday list. These look so pretty and I love the piping. I bet you will be missed!