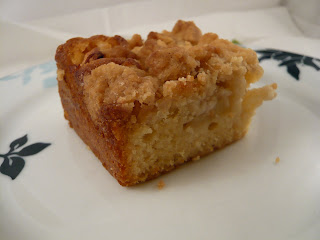 This cake was made at the end of a marathon baking session at the weekend and I had various ingredients that needed to be used up. These included three eggs and an unspecified amount of buttermilk. I also had too many Bramley (cooking) apples and a desire for a bit of autumnal spice to warm up a cool evening. And so this cake was born.

Most of my family are less than enthusiastic about cinnamon so I assumed that this would also be the case for my work colleagues. I therefore sprinkled cinnamon on only 2/3 of the cake before baking it (as you can see in the picture below), but then discovered that at work, cinnamon seems pretty universally popular. All of the cinnamon portion of the cake went first (although all of it did go!) so I think it's safe to say that cinnamon is popular!

Method
- Preheat the oven to gas 4/180C. Grease and line a traybake tin, 12x8" (20x30cm).
- First make the crumble topping so it can cool slightly while you make the cake. Melt the butter gently in a pan, then add the sugar, stir to mix and finally add the flour. It will look like a ball of dough, not crumbly at all. This is fine.
- Cream the butter and sugar until light and fluffy.
- Add the eggs, one at a time and then the buttermilk and vanilla, adding a little flour if it looks curdled. Add the rest of the flour and beat to combine. (I didn't follow this method - I just dumped all the eggs, buttermilk and flour in at once and the whole lot curdled. Yuk. I ended up adding more flour to try and pull it together again, which is why there's quite a lot of flour in the ingredients list. I suggest following a more gradual approach and also not having fridge cold eggs and buttermilk would probably also have helped.... I'll never learn)
- Spread the mixture into the tin.
- Peel and core the apples and cut into cubes. I did this directly over the cake in the tin to save having to prevent the apples going brown if prepared earlier. Sprinkle over the cinnamon.
- Put the crumble topping on the top. The best way I found of doing this (and it sounds a little odd) is to sort of 'chop' the mixture out of the pan, so that little lumps of it end up evenly distributed over the cake/apple mixture. I guess you could also crumble it on with your fingers, but my method is less messy!
- Bake for around 50 minutes to an hour, but keep checking. Mine actually took just over an hour, but I tend to err on the side of caution in making sure things are cooked through - it might have been done a good 15 minutes earlier! 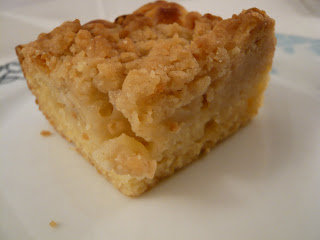 I can't thank Suelle over at Mainly Baking enough for posting this crumble topping ages ago - I've used it a few times now and it always comes out really crunchy, the perfect contrast to soft cake. It's not a crumble I'd use on top of fruit, but here it really is great - thanks Suelle!!!

This is such a lovely cake - moist soft base with lovely soft apple (cinnamon flavoured or not!) and then the really crunchy crumble topping. It would be pretty perfect with custard (Bird's if you please, and thick too - none of this proper stuff with eggs in!) but was great without. In fact I have a couple of pieces stashed in the freezer for those cold nights when you want comfort food without effort... mmmm!
Posted by Caroline at 22:10

Seems divine. Especially how buttery it is. Yum. I wonder how it might freeze--if I were to cut it into squares and save several back in different packages. (But, um, I think I want the proper custard with eggs, please!)

You are clever! This would be my idea of heaven on a plate right now!

Looks delicious and you can't go wrong with apples and cinnamon = yum!!

Looks lovely - just the right thing for this weather.

I tried making an apple crumble cake last weekend - didn't come out looking nearly as nice as this!

Mark - thankyou! I have frozen some of mine, but haven't yet got round to defrosting it to see if the texture is still ok. I'm hoping so! I still prefer Bird's custard though!

Katie - thanks, you're quite right, apples and cinnamon are amazing together!

BG - thanks, it just hit the spot nicely!

Foodycat - I'm sure yours tasted great too though! I'd really recommend the crumble mixture for the topping that Suelle posted. It looks as if it's not going to work - it isn't crumbly at all, just a wettish clump, but break it up as you put it on and it gives a lovely crunchy crumble once baked - much better than a standard crumble mix.

Cake + apple + crumble = what more can you want for pudding?

The cake looks so good and moist! I didn't get many bramleys donated this year (usually via mums neighbours!) but if I get any more this is top of the list!