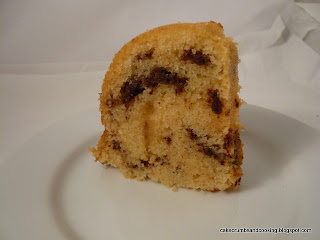 This cake came about as I found a bar of milk chocolate that I wanted to use in baking. I wasn't really in the mood for a full on moist, dark, mega chocolate cake, instead I was looking for more of a simple teatime treat. In the past when I have mixed chocolate chunks into a cake, they have all sunk to the bottom of the cake rather than remaining suspended, so I decided to try a different technique here. 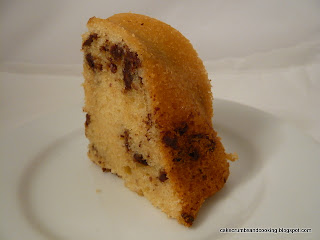 The original idea had been to add all of the chocolate in one layer in the middle of the cake, but after chopping it, there was just too much chocolate to put into one layer. Having sprinkled the rest of the chocolate on top of the second layer of cake batter I was worried it would burn, and so covered the tin with foil for the majority of the baking time. This worked well - the chocolate didn't scorch or burn and I was able to uncover the cake for the last few minutes to allow it to colour up.

- Preheat the oven to 180C/Gas 4. Grease a bundt tin well (mine holds 2 litres to the rim)
- Cream the butter and sugar until light and fluffy.
- Add the eggs, vanilla extract and flour and continue beating until well combined.
- Spoon just under half of the mixture into the prepared tin and add chopped chocolate until you have a covering, but not deep. Repeat with the remaining batter and chocolate. Cover the tin with tin foil.
- Bake for around 45 minutes then remove the foil and return to the oven for about 15 minutes to allow the top to colour - it will be quite pale. Test with a cake tester or wooden cocktail stick to make sure the cake is done.
- Allow to cool slightly in the tin before very carefully removing to a wire rack. I say very carefully because I wasn't careful enough and my cake broke up slightly. 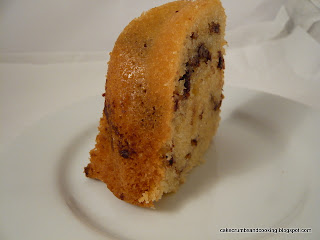 The chocolate didn't really remain in layers, but this didn't really matter because it meant that each bite got a bit of chocolate - yum! This technique of layering the chocolate into the batter worked well for me, and I might try it with cupcakes next time. As I had hoped the cake was moist and buttery and light. With the addition of chocolate this made a very good cake to have available for those snacky moments.... we all get them!
Posted by Caroline at 23:10

I love cakes like this were the chocolate is left in chunks. That way you get little blobs of melty chocolate throughout - yummy!

It looks great with the speckles of chocolate through it. I had heard that is you toss fruit in flour, it won't sink to the bottom of a cake, I wonder if that would hold true with chocolate too?

What a great idea to layer the choc. It looks fabulous.

I think there are strange currents when bundt cakes bake - I've done something similar to this with round cakes and got a good layered effect.

I've had some success with flouring chocolate. My problem is stopping cherries sinking cos I always like to keep them as big as possible! Like the layering idea though!

that's the problem with heat... it melts stuff!... it looks so very light with a perfect 'crumb' as they say!... divine!

Lovely - I often prefer a sponge with chocolate in it rather than the whole thing being chocolate. It's lighter..so you can eat more!

Love how you've layered the chocolate - I'm going to try that next time. The cake looks moist and delicious!

Johanna - yes, the layers have disappeared, but I don't mind!

Jac - I don't know about tossing in flour - I never have much success with fruit tossed in flour either!

Lottie - interesting to hear that flouring chocolate might work! Cherries - my tip is to wash them very well - the syrup makes them sink too. Thanks for dropping by.

CC - it depends on my mood, sometimes I do want full on chocolate cake, sometimes not. This is great cake for the 'not' times.

Ros - look forward to hearing how you get on.

Celia - yes, it's been my go-to ratio for many years now! It's what I know as a sponge cake, although in Aus that's something completely different - fatless I think isn't it?

C, a sponge cake over here is light and airy and often fatless, I think. I don't make them very often.. :)

The chocolate bits look lovely and speckled within the mix!

I have not used my bundt tin very much due to breakages, must persevere!