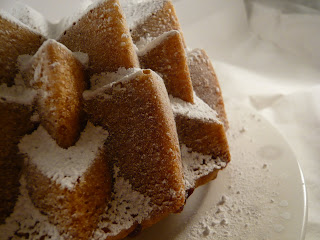 This is based on Nigella's Spruced up vanilla cake and was purely an excuse for me to use my new star shaped baking tin. Well, if you can't use it at Christmas, when can you!
I followed the recipe as given here, but made 1/3 of the quantity, as my star isn't nearly as big as Nigella's trees. (I would like the tree mould just for the novelty value. Mind you, I'd like most of the Nordicware moulds - they're all fab!) The only change I made to the recipe was to add about 35g of chopped dried cranberries to the mixture - I just prodded them into the cake mixture once it was in the tin, in an effort to prevent them getting stuck in the more intricate details of the star. This tactic worked well, and despite me not greasing the (admittedly nonstick) tin at all, it turned out beautifully! There's luck for you! 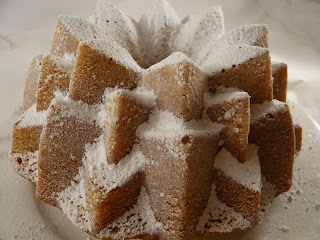 The shape was much admired by colleagues, but quickly destroyed as the cake was eaten up! The cake smelled lovely when it was made, but unfortunately I've since developed a particularly horrible cold (before getting the chance to try a piece) and lost my sense of smell and taste. I've saved a piece for myself in the freezer though and am looking forward to trying it when this cold is better. Appearance wise, the cake looked deliciously moist and the cranberries mostly stayed near the bottom, which was the plan. I'll update when I've tasted it, but I was really pleased with the way my new tin performed!

Your cake is absolutely fantastic, may I have a slice?

That looks so good - a craggy, snow covered mountain range! It would make just as good a centrepiece as the spruce forest cake.

I've admired Nigella's spruced up vanilla cake for a while. And now I can admire yours too! What a beautiful, christmas cake

Looks fab! Will you be entering this in the new Nigella monthly bake? http://blog.maisoncupcake.com/forever-nigella/

Well done C! I am so scared of those bundt tins - I am convinced that nothing will turn out of them.

Barbara - you'd be more than welcome!

Suelle - thanks! I was pleased with the way it looked - lots of icing sugar is clearly the way forward!

Please Do Not Feed The Animals - thanks!

Brittany - thank you very much!

Chele - thank you. I hadn't seen that bake off so thanks for the pointer, I'll see if I can enter it!

Foodycat - I always think that things aren't going to turn out, but touch wood, been ok so far. I think it helps that this tin is brand new and that there weren't any sticky bits in the mixture to prevent it turning out.