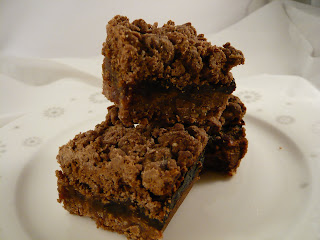 It's time for I should Cocoa again, with Choclette hosting this month. Her choice is dates and this month I have managed to not leave it until the very last minute! It didn't occur to me to use fresh dates, although I suppose that would have been good, given that they're in season, but instead I used the widely available dried dates. 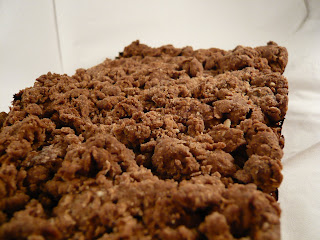 These bars, recently published (though not as recently as I thought!) by Dan Lepard had intruiged me and Suelle at Mainly Baking gave the recipe a good review too. I made something with dates a while ago and wasn't exactly sure whether I like the flavour of dates, so the idea of combining them with orange sounded good to me. I halved the recipe and cooked it in a 2lb loaf tin (having worked out surface areas etc and found that this would be the closest thing to half of the specified tin size) and obviously, left out the hazelnuts. I'm sure they would have been delicious, but not for me! 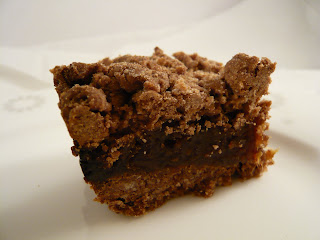 The resulting bar is deep and generous looking - you can see the thick layer of dates in the picture above - really moist and delicious. I really, really enjoyed these, far more than I was expecting to. I know the point of the challenge is to make the dates the star, but in all honesty they aren't my favourite dried fruit - I think it's the combination of flavour and slightly stringy/fibrous texture that disturbs me. So I was really pleased to be able to find a way to enjoy the dates so much. The texture of the dates is lovely and soft and melting inbetween the two layers of crunchy crumbly bar. The predominant flavour was orange, with a very background date/chocolate flavour (oops, not quite in keeping with the challenge!!!) I added possibly a little more water than I should have to the top layer of crumbs, making the mixture a little wet but all turned out well after I dropped little bits onto the date layer. I also left them in the oven a little longer than specified, but this was deliberate as I wanted a really crunchy topping - which I got!
These might be nice with some mixed spice added to the date layer too, for a more festive treat, and I think they might make a nice change to mince pies for when you've had your fill of those during the festive season!
Posted by Caroline at 22:45

This month;s challenge was a difficult one, I'm in the same boat as you so I can empathise with this! Great bake though, you may have even tempted me to make it ;0)
Thanks for taking part.

I'm not a dried fruit girl, but my family would love these bars - now the question is: am I good enough to make it for them!!!!

These look very good. I'm so pleased you liked them!

Oh no C, that's two ingredients now you've been disappointed with. Thanks for taking part. Well done for giving these a go when you were so unsure about dates and really pleased that you liked them.

You seem to have the same experience with dates as me! I started out not having much hope for my date bars; added in some ginger to spice them up but, just like you, the resutling bars were really good!

Chele - these were good - hope you enjoyed your date bake too!

BG - I'm sure your family would love these!

Suelle - they were lovely, so thank you for making them first!

Choclette - I really enjoyed these, so don't worry about me not liking the ingredients picked! That's the point of a challenge in a way - to try something different. Perhaps I don't dislike dates as much as I thought - I've since made banana, date and caramel cookies that were great!

Gillian - it's very satisfying to find you like something you thought wouldn't be that nice isn't it!