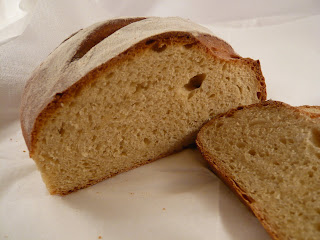 I was just starting to think that I'd like to try a different bread from my usual semi-wholemeal one, when Dan decided to publish this bread! Happy coincidence. Chickpea (gram) flour was added to my shopping list for the week and the bread was underway. 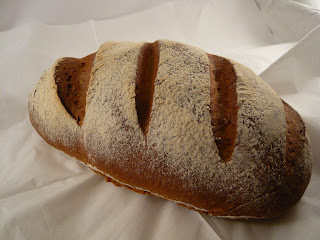 I halved the recipe so that I didn't end up with a huge loaf to work my way through but intended to otherwise stick to the recipe as given. My memory let me down though - I ended up forgetting to put any fat in with the flours - how can I forget that from looking at a computer screen to walking into the kitchen? Worrying! However, I don't think that the texture of the loaf suffered too much for it. I was interested in Dan's technique for kneading - essentially to mix the dough and leave it for an hour, knead briefly, leave for a while longer, then shape and leave to proove. This is what I've gradually been doing with my doughs anyway. Instead of doing three short kneads over about 40 minutes I've been lazily doing just one after leaving the dough for a while, then another brief one before shaping. It's generally because this is what suits my day and the other things I'm doing in the kitchen, and to prevent having to keep washing my hands to get them oily to wash them again (my skin hates the winter enough as it is without constant washing!). 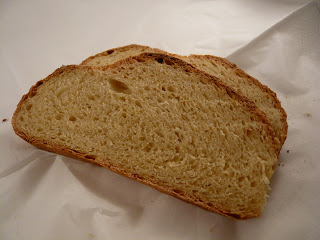 I was really pleased with the way this lovely golden loaf turned out - the colour is a gentle yellow, with a fairly thick chewy crust - I think this is how it was supposed to turn out, as Dan's picture here is very similar. I found it a little dry, but perhaps I slightly overcooked the loaf as it's quite a dark crust. I can't recall ever having eaten chickpeas so I have no idea what they taste like but this loaf reminded me slightly of the smell and flavour of cashew nuts. I can imagine that this bread would make fantastic toast, and Dan's serving suggestion of a soupy stew would also be great because it's a very robust loaf and the slices would be great for soaking up gravy.
Posted by Caroline at 19:30

wow that looks like a very good loaf! i've never used chickpea flour before so this is new to me... i'll defo give it a go!

What a great looking loaf of bread. Even more artisan than the last ;0)

Johanna - Dan Lepard is always good for adding different things to his baking recipes. It would never have occurred to me either!

Dom - thanks, chickpea flour was new to me too. Let me know how you get on if you make it.

I haven't tried this one yet - looks great - I am not very familiar with chickpea flour apart from for making bhajis. I'll have to give it a go one day soon!

Your loaf looks gorgeous and has a great colour. I am now trying to imagine what a gram flour loaf would taste like, but your description sounds pretty good.