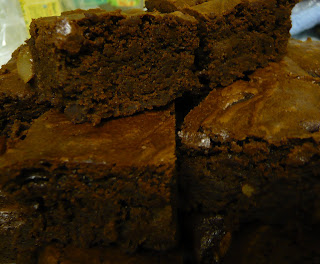 Ahh, the chocolate kick intensifies. Still wanting, craving chocolate (well, who doesn't really) I decided that brownies were the way to go because it's been ages since I made them. I do have a particular recipe that I like making, but was on the lookout for a new (perhaps even better) one and came across this one, on the Waitrose website. If you haven't yet found the Waitrose recipe website, please do take a look. There is always loads of inspiration there and it's free! (And you don't have to shop in (admittedly quite expensive) Waitrose to make the recipes - they don't specify loads of own brand stuff that can't be substituted, there are quite often nutritional breakdowns of the recipes, which is always handy).

Anyway, these brownies caught my eye because you don't often see fresh fruit and brownie recipes and it appealed. I could just imagine the refreshing slight crunch of the pear and the softly yielding gooeyness (if that's a word, and if it's not, it should be!) of the cakey part. I had to sub out the Brazil nuts (allergic) and decided that 100g dark chocolate, chopped would be a great substitute, which it was! 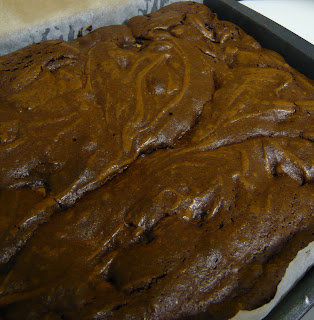 Uncut brownies. I don't know why they look marbled like that, I didn't do anything special to them! Anyway, the recipe. This was really easy. So there's no excuse not to make them pronto.

Method
- Preheat the oven to 180°C/Gas mark 4. Line a 30cm x 20cm x 4cm rectangular tin with baking parchment.
- Put the butter and 200g dark chocolate in a small pan and place over a very low heat until melted, stirring occasionally.
- In a large bowl, beat the sugar and eggs together until pale and fluffy, using an electric whisk for speed. Gradually pour in the melted chocolate mixture and continue whisking until combined.
- Fold in the flour and cocoa then stir in the pear pieces and the remaining chocolate pieces.
- Pour the mixture into the prepared tin and bake for 30-35 minutes, until the brownies are just set.
- Remove from the oven and allow to cool in the tin. Cut into 24 squares before serving. 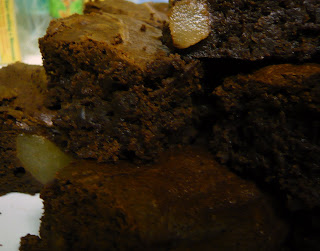 You can see the pear pieces better in this last picture. How were they? Well, fabulous! However, I found that the pear didn't work quite as well as I had hoped - my pear was perhaps a little too soft, or it cooked too much in the oven as it was soft in texture. All down to personal taste though. And the brownie part was seriously good stuff. I will make these again but will probably use 100g of 70% dark and 100g of really good (not too sweet) white chocolate like Green and Black's. They went down a storm at work.

Make them though - they're seriously good!!!
Posted by Caroline at 19:25

Wow! This recipe looks amazing! Would love a link to it from our site. Here's how you can create inbound links from our site Check it out here.