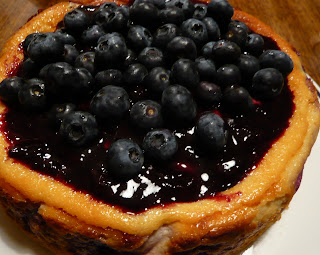 This is the second dessert I made for my Grandfather's birthday party (click here to see the first one - a chocolate truffle torte). I've never made a baked cheesecake before and felt that it ought to be part of my repertoire. As luck would have it, somebody on one of the messageboards I frequent mentioned that they have often made this recipe with great success. Having read all of the user comments (which seriously took a while - loads of people have made and commented on this!) it seemed likely to be a success - important when you're trying something for the first time I always think. (I find it really depressing to spend time, effort and ingredients making something that turns out burnt or inedible or totally different to the picture, so all the positive comments reassured me). 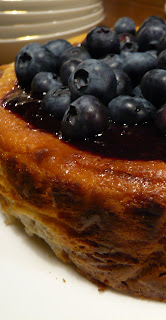 As you can see, I decided to go with a blueberry cheesecake, rather than raspberry. Neither are in season in the UK at the moment, but at least blueberries are in season in the countries they're being imported from (South America mostly I think) rather than the forced Spanish rasberries. And blueberries travel well, whereas I've seen raspberries in the supermarkets recently that have actually been mouldy on the shelves (how stupid do these supermarkets think we are - am I the only one to actually look at the produce I'm planning to buy???). I guess you could also use frozen fruit, but it's nice to have some fresh berries to top the cake with! 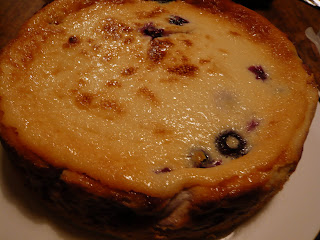 Anyway, here's the recipe as I made it; there are a few minor amendments:
Blueberry (or raspberry) baked cheesecake
Ingredients
8 hobnob biscuits
50g butter , melted
300g full fat cream cheese (you can use all full fat if you want, I just used what I had in)
200g low fat cream cheese
2 tbsp plain flour
175g caster sugar
vanilla extract
2 eggs, plus 1 yolk
200ml soured cream
300g blueberries
icing sugar
Method
- Preheat the oven to 180C/gas 4.
- Crush the biscuits in a food processor (or put in a plastic bag and bash with a rolling pin - which I did, in the absence of a food processor). Pour the melted butter onto the biscuits and then press into a 20cm springform tin and bake for 5 minutes. Remove from oven and allow to cool.
- Beat the cream cheeses with the flour, sugar, a few drops of vanilla, eggs, the yolk and soured cream. (At this point the original recipe says until light and fluffy. This is a lie - mine was runny and neither light nor fluffy - still, I persevered)
- Stir in half the blueberries and pour into the tin.
- Bake for 40 minutes and then check, it should be set but slightly wobbly in the centre. Leave in the tin to cool. (Mine took about 1 hour, but I may have overcooked it.)
- Keep a few blueberries for the top and put the rest in a pan with 1 tbsp icing sugar. Heat until juicy and then squash with a fork.
- Push through a sieve if you want, I didn't bother because blueberries don't really have pips like raspberries.
- Serve the cheescake with the blueberry sauce and extra blueberries scattered on the top.
You can see the naked cheesecake without its adornments in the picture above. It did crack slightly on cooling, but I didn't mind! (It wasn't too obvious really, and once the sauce and extra blueberries were one, no-one was any the wiser!) It took longer to bake than the recipe said, and the cheese-y mixture at no point went 'light and fluffy' but otherwise, a very easy to make recipe indeed. 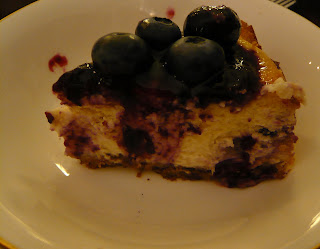 So, how was it received? A massive thumbs up from everyone who had some - I was really quite proud of this dessert! It was quite light and if I'm being really picky (which I am) the base wasn't particularly crisp (but J says that they quite often aren't on baked cheesecakes) and the texture was smooth but not super-smooth (as I was hoping) but it did taste fabulous and I would make it again.


There was some left after the party and T was lucky enough to enjoy a piece for his breakfast the next morning. Yum! I'll leave you with a final picture of the glossy sauce and blueberry topping. 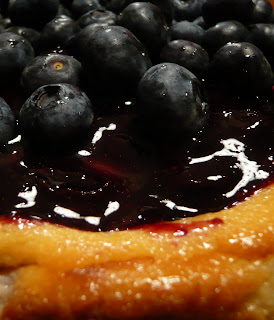 How beautiful ! i'll try your recipe too !!

This looks absolutely wonderful. I think using some low fat cream cheese is a great idea.

This looks delicous. I love blueberries!