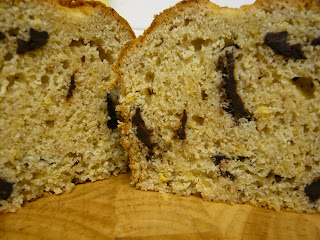 Now does that picture look strangely familiar? Well, I enjoyed the chocolate orange version of the cake so much that I wanted to try a chocolate lemon variation as soon as possible. Having over-bought on the bananas a couple of weeks ago, I had some beautifully fragrant bananas sitting in the fruit bowl, and still had enough left after making these chocolate banana cookies to allow me to try out a lemon incarnation of this recipe, originally made for the Sweet and Simple bakes blog event.

I won't say too much more, I followed the recipe in exactly the same way as last time simply substituting the grated zest of a lemon for that of the orange, and upping the chocolate content to 50g rather than 40g (fewer people on diets!), and the cake turned out just as well. Quick and easy and used up my banana mountain. 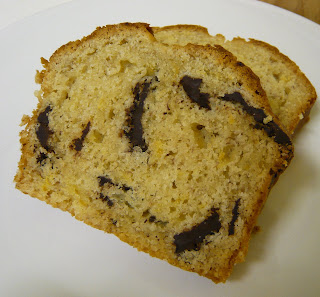 It went down extremely well at work and disappeared very quickly! The lemon flavour was more subtle than the orange in the previous version, and although chocolate and lemon perhaps don't sound as though they'll work well together, they do in this case because neither flavour is dominant. The cake is light and goes down a treat mid-afternoon as a quick pick-me-up! 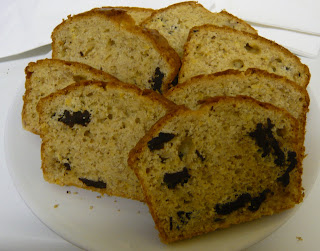 Crumbs, this version looks so delish and I bet the lemon really brings out all the flavours wonderfully!!

Oh my word Crumbs I like your version of this bake. Citrus in any cake has my thumbs up!!