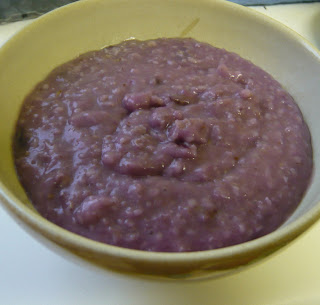 I enjoy eating porridge for breakfast, but for all the low-GI slow release energy it's supposed to give you, I'm usually hungry far sooner than if I have a different breakfast. All the same porridge is good, and very healthy so I sometimes have it anyway (and remember to take more snacks with me!). I had blueberries in the fridge and had read a recipe a while ago in one of my multitudes of cookbooks that suggested using frozen forest fruits in porridge. I reckoned fresh blueberries would be just as good so used them instead.
I'm sure you know how to make porridge, and everyone differs slightly but here's how I did it (with thanks to Fiona Beckett who blogs here as the frugal cook, and has a student cooking website here at Beyond Baked Beans for the original idea).
Ingredients: 35g porridge oats, 50g blueberries.
Method: Weigh oats in a mug (I use a full espresso cup of oats) and put in a saucepan with the blueberries. Add 2.5-3 times the volume of water to oats (which is why measuring in a cup is handy) and bring to the boil. Turn down and let it erupt volcanically (you'll know what I mean if you've made porridge before!) for 5 minutes (or as long as your oats recommend on the pack). Pour into a bowl and enjoy! Quick and good for you.
I mashed my blueberries quite hard to get them to explode and turn the porridge my desired purple colour. It might be nice to stir in some more fresh blueberries after you're done, but mine were a little on the tart side. 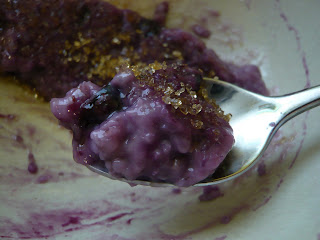 I like crunchy demerara sugar on my porridge too!