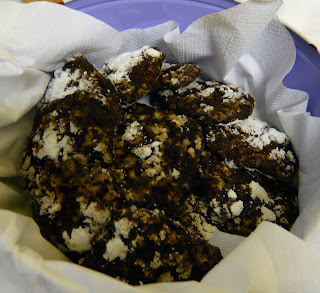 Firstly, and most importantly, it's Fairtrade Fortnight at the moment (it runs from the 23rd February to 8th March) which is something I believe in passionately. As usual, Wikipedia has a good summary article outlining the principles and history of fairtrade, found here. In the UK, The Fairtrade Foundation are one of the main bodies involved in the certification of products and their promotion. Do check out their website, it's really fun and informative and has lots of info and links to campaigns, resources and much, much more. I really can't do it justice here, but I urge you to check it out and get involved.

Speaking of getting involved, it really doesn't have to be difficult. Shop in Sainsburys? Buy bananas? You're already involved. All of Sainsbury's bananas are fairtrade, even the value bananas. (And no, I have no affiliation to Sainsbury's, it's just where I happen to shop - The Co-op are also very well known for supporting and promoting Fairtrade products.) Many workplaces only serve fairtrade tea and coffee - it's just as tasty as other brands now, although I'm aware that many years ago this didn't use to be the case (I'm reliably informed, not being a coffee/tea drinker myself). There are so, so many Fairtrade products out there, from fruit to juice to coffee, tea, rice, pasta, jam, sugar, cocoa, chocolate, dried fruit, wine...... I could go on and on, but suggest you click here to see the Fairtrade foundation's list of products.

Go on, make a difference to the life of someone you don't know, but who deserves better. Buy Fairtrade. Right lets move on to a recipe to use some of those yummy fairtrade bananas that were slowly turning black and fragrant in my fruit bowl. 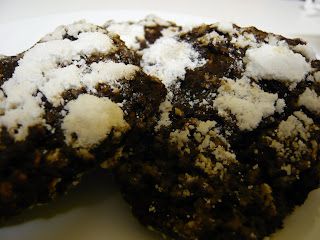 This is another recipe from Dan Lepard, and you can find the original here, on his forums. As he says, they're ideal for using up a couple of fragrant, mushy looking bananas and you can get fairtrade sugar, vanilla and cocoa too!!!

Method
- Beat the sugars and butter together until light and fluffy. Add the banana (I added mine in chunks) and essence and continue to beat. Mine looked ick here - all sort of split, but never mind.
-Sift the flour, cocoa and soda together, beat this in followed by the oats.
- Cover and chill the mixture for 30 minutes. (I put mine in an unheated room, so cool, but not chilled really)
-Preheat the oven to 180C (fan assisted)/ Gas 4 and lightly grease a baking tray (or put baking parchment onto it).
- Spoon blobs the size of unshelled walnuts (40g - 50g) out of the bowl, roughly shape into balls then press these onto the tray spaced 3-4 cm apart. (The mixture was very sticky and messy to work with - don't try answering the phone at the same time!)
- When the tray is full (mine took twelve and even then, they were starting to make friends by the time they were cooked) return the bowl to the fridge (um, I didn't bother.... I didn't see that chilling it had helped much anyway, but then I don't suppose I chilled it properly)
- sift loads and loads of icing sugar over each cookie (I didn't squash mine down at all - they were still ball shaped ish when they went into the oven) until you can't see it.
- Bake for 15 - 20 minutes until the cookie looks baked (it's a tricky one to judge) then leave for a moment before easing each off the tray with a spatula onto a wire rack, and repeat with the remaining mixture.
As Dan says, it's very difficult indeed to tell when these are done. Mine definitely took 20 minutes and possibly a bit longer, but you don't want to go over and burn them. I had to put two trays in at one point, and the lower tray took over 20 minutes - at that stage they were very wobbly indeed. 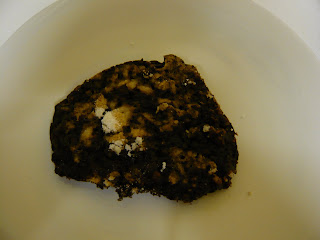 Some of mine welded themselves together. I really must get a second baking tray as my small one just isn't up to the job. Hence the triangular cookie you see above!

So were they good? Need you ask? They aren't much of a looker, it has to said, but they make up for it in taste and texture. I thought they would be quite wet inside, but they were beautifully light and moist, with neither the banana nor the cocoa flavour being too dominant. I didn't find them too sweet either and the oats provided a really nice chewiness. Really good.
My colleagues (at yet another new place - I'm rotating at the moment, to the extent that I'm nearly dizzy!) loved them and there are calls for baking EVERY day!
PS Check out the rather lovely Emma Bridgewater cake tin. Someone with great taste obviously bought it for me - you know who you are ;-)
Posted by Caroline at 18:45

Awesome Fairtrade plug. Bakers like us can choose loads of Fairtrade ingredients and in many cases it;s organic too!

This is what I made recently and will make again today!!!!